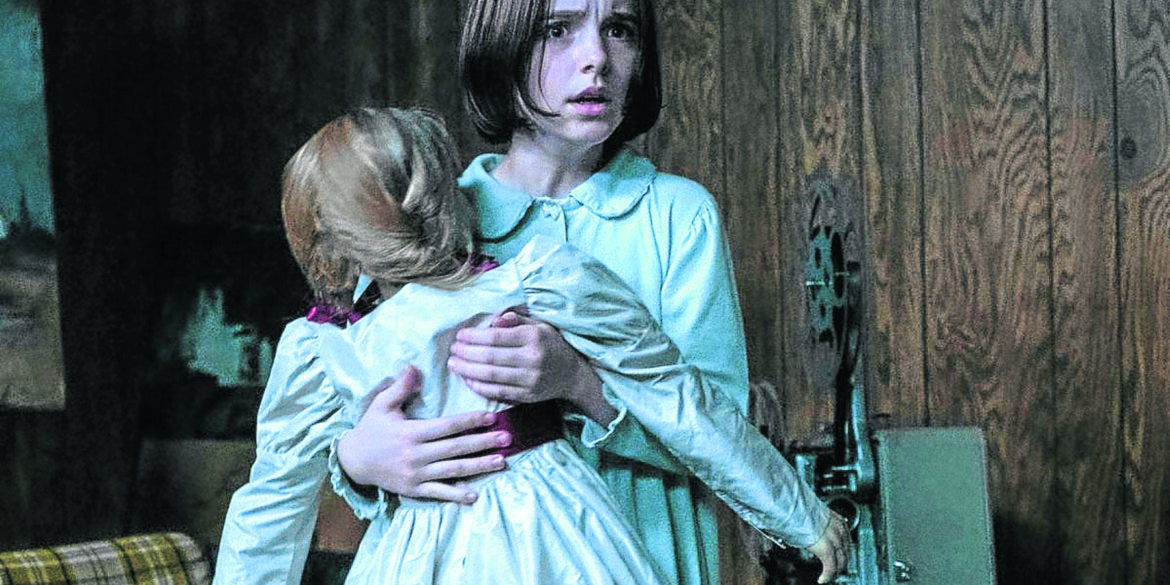 Judy Warren (Mckenna Grace) is the daughter of paranormal investigators

“Annabelle Comes Home” is the latest entry in James Wan’s Conjuring-verse of horror films, this time with Gary Dauberman in the director’s chair. Dauberman wrote the prior two “Annabelle” films so he’s in familiar territory, also writing this latest installment. Very much a horror guy, he also wrote “The Conjuring” spinoff “The Nun,” as well as the adaptations of Stephen King’s “It.”

The Warrens from “The Conjuring” films are here, but most of the action (or horror, rather) involves their daughter Judy. While her parents are away on one of their investigations, Judy is home with her babysitter Mary Ellen (played by Madison Iseman from “Jumanji: Welcome to the Jungle”) when Mary Ellen’s friend Daniela (played by Katie Rios) comes over. Daniela, suffering from a loss that is explained later in the film, enters the room where the Warrens keep all the most dangerous cursed objects they’ve gathered in their career. She touches everything, which apparently allows all the ghosts/spirits/demons to play. That’s basically the plot. And it’s good that it’s not convoluted. It knows what it wants to be: a carnival haunted house fun ride, with more than one spirit/boogeyman.

It’s a prequel to “The Conjuring” films, so in this one Judy is played by Mckenna Grace instead of the older Sterling Jerins. Grace has a couple projects under her belt already, which explains why she’s got the gravitas of a girl who grew up with parents who contend with possessions. Judy’s inherited her mother’s psychic visions and Grace’s haunted look sells that burden. Rios’ Daniela at first feels like the requisite unwise character needed to kick off the scary high jinks, but gets another layer added when her motivations become clear.

Dauberman is definitely working off Wan’s “Conjuring” playbook here, with effective scares that are nonetheless familiar ones, ones we’ve seen before. There’s fog everywhere. The laws of horror physics means something you should be able to hear is eerily silent until it enters frame. Sometimes there’s the lazy bit (now all too common) where something in the background the character doesn’t see starts moving, but does something that makes no sense, as if solely for the audience in a wink-wink meta manner. There are some interesting choices, a couple of misdirects and threads of light comedy weaved in here and there, sometimes giving the film a feel of one of Steven Spielberg’s Amblin films from the 1980s. Which makes sense, as this effectively is the Worst Sleepover Ever. There’s even a convenient reason for why they don’t just leave the house and stay somewhere else.

But while some sequences do give you the expected frights and jolts and vicarious thrills, where “Annabelle Comes Home” falls short is in successfully maintaining a mood of sustained, or rising, tension. True, there’s more than one baddie to contend with, but with three girls, sometimes separated, there’s the tempting indulgence to just cut away right when something’s happening, which implies that some of these scary scenes just didn’t have an ending in mind.

Ultimately the film seems to comment on a person’s capacity to scare oneself, how much one is complicit with their own terror. It’s an interesting take, but would’ve been more impactful with a more memorable and cohesive chain of sequences than we get here.