Lawrence of Arabia on my mind in Morocco | Inquirer Lifestyle 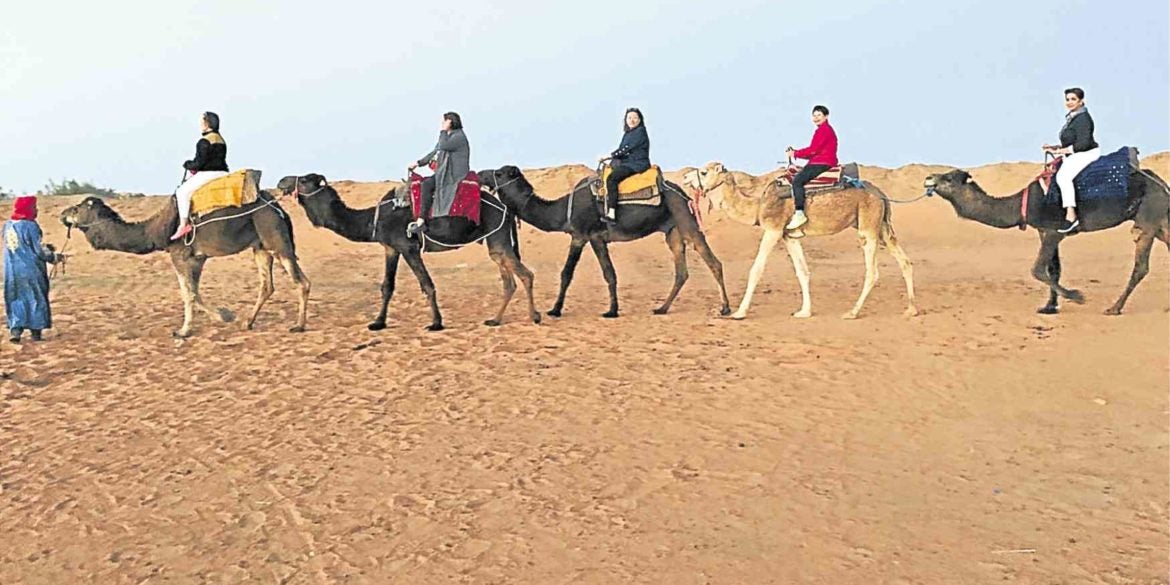 On the camels at sunset in Merzougga in the Sahara Desert

Lawrence of Arabia on my mind in Morocco

Morocco on my mind is Lawrence of Arabia, a man with a mission as he rode his camel defiantly through the endless golden sand dunes of the vast Sahara—a hero with a purpose as only Peter O’Toole could bring to life.

This compelling scene led me to visit Morocco a second time, to soak in the solitude of that desert under a luxury tent in the true style of the legendary British lieutenant T.E. Lawrence, and to experience an adventure in a geographically exciting country in the northwest of Africa.

Morocco is a kingdom of contrasts. We were there in April, when days were cool and nights cold. The High Atlas Mountains were still covered with snow, while the north was verdant green, alpine forests defining the contour of ski resorts.

It is the home of the oldest university in the world, the University of Karueein in Fez, founded in 859 A.D., revealing to us the wealth of history within its borders.

Moroccans are a beautiful mix of Arabic and Spanish ethnicity. The spoken languages are Arabic, French and Spanish, but the traders in the souks sell their wares in English, likely learned from American and British tourists.

Being in a Muslim country, we dressed conservatively, with shoulders and knees covered, when we set out for sightseeing and shopping on our first day. The lovely spring day was a comfortable 12°C so we had an easy time going around.

Called the Red City because of the ochre sandstone used in constructing its buildings, Marrakech is generally clean and orderly, in mute contrast to the cacophony of Berber music, shoppers haggling for discounts, and merchants hustling their wares within the walls of the medina.

Beauty was all around the place, from the details of the carved doors and windows of private homes to the riads’ colorful mosaic tiles. Water provided a soothing gurgle at the center of courtyards, adding a sense of steady grace and peace to the atmosphere.

At the heart of the medina (“walled city”) is the ancient square, the Djemma El Fna, (translated as Assembly of the Dead) where tourists and street performers converged. Now a World Heritage Site, the huge square was used long ago for executions. Present crowd drawers include snake charmers with their pet serpents. My companions gamely dished out fat tips for the sheer thrill of having a snake draped around their necks.

Dancers, acrobats, henna artists and monkey handlers created the atmosphere of a circus. Food stalls set up at dusk sold everything from dried fruits to boiled sheep’s head.

We gamely lost ourselves while shopping at the souk district for djellabas, those long loose unisex outer robes, and baboush, classic Moroccan slippers. Overwhelmed with excitement, we bought improbable quantities of merchandise, promptly forgetting that both our hired van and the ferry to Spain strictly dictated one piece of baggage per person.

We decided to stay four nights inside the medina, just next to the Grand Koutoubia Mosque.

The city served as the imperial capital in the time of the Almoravid Empire. The Grand Koutoubia’s minaret lords it over the city and inspired the architecture of the minaret of the Great Mosque of Seville, back in the 12th century. It is now the bell tower of the Cathedral of Seville.

The Majorelle Garden, understandably one of the most visited in Marrakech, was purchased by Yves Saint Laurent and his partner Pierre Bergé after the demise of visual artist Jacques Majorelle in 1962. Truly delighting the senses are the colors dominating the villa and its surrounding structures. Imagine cobalt blue all around, this time proprietarily named Majorelle blue, in symphony with lemon yellow and teal, further harmonized with the greens of the gardens where several varieties of cacti abound.

For those of us who loved to shop for exquisitely crafted purses and fashionable silks, our time in the boutique was the day’s highlight. We visited the newly opened YSL Museum built in his honor as a fitting memorial by Bergé, where Saint Laurent’s well-curated haute couture collections are displayed.

Equally worth the visit were La Bahia Palace, built in the 19th century and once the residence of Bou Ahmed, his four wives, and several concubines; a former riad that is now a beautiful restaurant, Dar Moha, where Pierre Balmain once lived; and the jazz bar of La Mamounia Hotel for a drink.

Driving west to the Atlantic Coast, we went next to the picturesque fortified seaside town of Essaouria, made arrestingly attractive under the noontime sun by fishing boats and nets, all painted blue. Its European architectural influence is evident in whitewashed structures.

Once called the Port of Timbuktu, the town was an important trading center between Africa, Europe and the Americas, and commerce consisted of tea, ivory and even slaves. As a fishing market today, Essaouria is a place to dine on the most delicious lobster tails and clams meuniere, more palatable after five days of meat tagines in Marrakech.

Our rooftop lunch was a prelude to another onslaught of shopping. Our tour guide must have been quite chagrined as we kept popping in and out of shops, throwing our planned itinerary out of whack.

The air was filled with the aroma of argan oil, cinnamon, saffron, turmeric and other spices, competing with other merchandise like hashish, medicinal Viagra, and the scent of humanity itself. It must have been that medley of scents and sights that made us buy more styles of djellabas and other footwear.

Road to a thousand Kasbahs

Eight hours south of Marrakech, we enjoyed several stops on our way to the oasis of palm trees and Ourazazate’s 1,000 Kasbahs.

The first stop was Skoura at the Ait Ben Haddou, an authentic medieval city that dates back to the 17th century. It consists of a set of mud and adobe buildings with four towers that resemble a medieval castle, called Kasbah. A shopkeeper told me that his family had lived in this Kasbah for four generations, and witnessed their tiny city evolve into a Unesco Heritage Site with its shops and inns catering to caravans, and a mosque dominating the community’s highest point.

This begins the path of the thousand kasbahs in the Dades Valley, all the way to Tineghir and the trading post of Timbuktu, where the Berbers built their fortresses to ward off invaders.

On the way we passed what we thought were a set of Kasbahs. It was like seeing Universal Studios in the desert, and true enough, we were getting a good glimpse of the studios where “Lawrence of Arabia,” “Gladiator,” “Cleopatra,” and other movies were filmed—the location made perfect for the purpose by the uninterrupted stretch of Saharan desert and sand dunes so close by.

We were billeted overnight in an eight-room inn made to look like a medieval Kasbah, Les Jardins de Skoura, owned by a French couple who decided to live the rest of their lives in Morocco. Next door was the 17th-century Kasbah Amridil, whose façade is on the 50-dirham note, privately owned by a family from Saudi Arabia. It was also the perfect setting for the movies “Ali Baba and the 40 Thieves” and “Lawrence of Arabia.”

After breakfast the next day, we drove seven hours further east toward the Sahara to the border of Algeria, but not without a three-hour stop at a Berber carpet cooperative in a 15th-century Jewish settlement called Mela. I was not aware that way back in the 15th century, Moroccans were tolerant, as they still are today, toward other religions, mainly because of its cultural history.

During the Spanish Inquisition that began after the issuance of the Alhambra Decree of 1492, the Sephardi Jews in the Iberian Peninsula and the Muslims in Granada were banished by the Catholic Monarchs to North Africa. Before the founding of Israel in 1948, Morocco was home to 350,000 Jews, making it the largest population of Jews in the Muslim world. Today there are only 2,000 Jews scattered all over Morocco.

Sand dunes can rise to 150 m in Erg Chebbi. This exciting thought during our long road trip, as well as wondering what our tent would be like, enlivened us as we reached Merzouga, Erg Chebbi’s gateway.

We almost missed the sunset and scrambled toward the waiting one-hump dromedary camels, which took us on a stroll up to the first level of the sand dunes. As the sun set, the golden sand toward the east morphed into a spectacular show of changing colors, from orange to red to salmon to pink, with only the camel’s footprints marking the sand beneath us.

It was an awesome moment, with the silence of the heavens underscoring the hour as a time for meditation and thanks to a generous God who brought us to this spectacular 7 million-year-old desert.

We drove further south in our 4×4 vehicles to our six-tent camp, where we felt isolated from the rest of the world. Welcomed by our butler, Mohammed, we prepared for the evening’s temperature drop with cups of warm tea. It was a tagine dinner again but our luxury five-star surroundings—complete with a proper toilet and warm shower, plus a bed to guarantee a sound sleep and respite for our travel-weary bones—surpassed our expectations.

Bed could wait for me, though. In an area devoid of city lights, stars and some planets are invariably visible. Not wanting to pass up the chance to catch a rare spectacle, my roommate and I spent another hour stargazing until it was too cold to stay out.

I was up again at 4:30 a.m. and stayed out until the sun rose behind the Erg Chebbi, bringing back the magnificent changing colors of the golden sand.

As the awesome ball of fire that was the sun appeared and disappeared magically on the horizon, our beloved planet actually looked like one endless flatland.

As I prepared to head back into our tent, I gave one last longing look at this remarkable chunk of Divine Providence that is Morocco. And I smiled as I realized that neither Lawrence of Arabia nor Peter O’Toole was in sight, not even in my mind’s eye.

Nor could they ever be. This vision was much too perfect even for the likes of them! —CONTRIBUTED