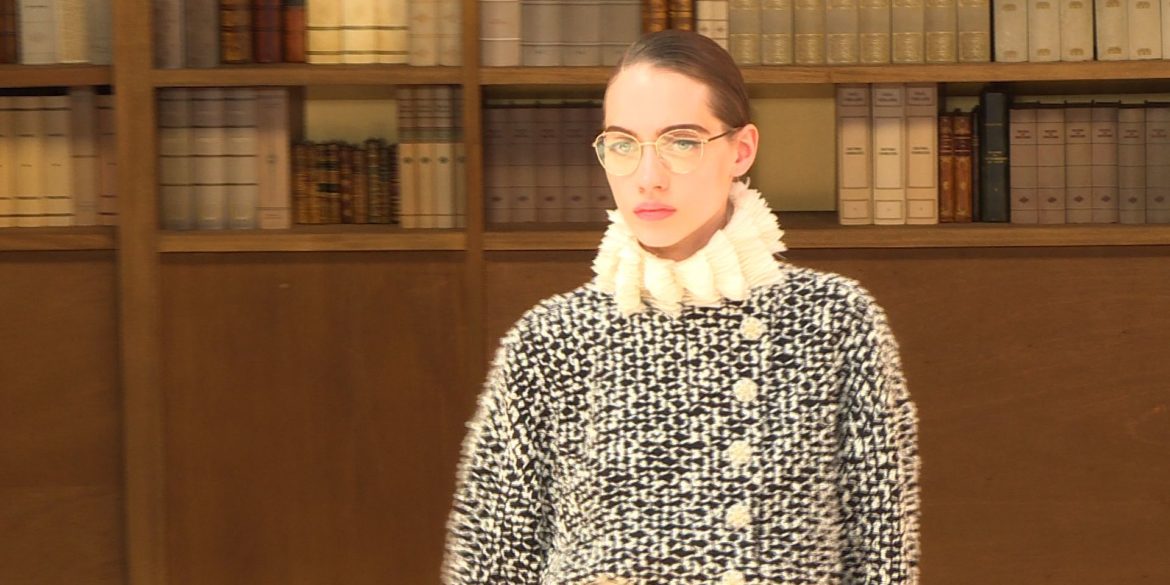 His successor and former right-hand woman Virginie Viard — who admitted that she spent more time with him than any other person — recreated one of the legendary designer’s libraries inside the Grand Palais, where Lagerfeld staged his shows.

The bibliophile, who died in February aged 85, is estimated to have owned up to 350,000 books.

In a rotunda worthy of the British Library, she sent out a sleeker, more restrained and more classically Chanel collection than the master’s final few.

Nods to Karl were everywhere from the models wearing their hair in ponytails echoing his white powdered mane, to a series of dresses adorned with Lagerfeld’s signature starched collars and cuffs.

The brand appeared to be putting Lagerfeld’s legacy on the same footing as the French house’s founder Coco Chanel.

That despite the German once admitting that Coco Chanel would have hated what he did.

The two-tone bowed shoes evoked the court dandies of Lagerfeld’s favourite century, the 18th, with patent slippers adding another touch of boudoir glamour.

The discreet Viard, who did not talk to reporters, appeared briefly on the first floor of the set at the end to acknowledge the applause.

She did, however, put her own mark on the clothes.

A four-pocket belted trouser suit and coat spoke of a purer less flashy marriage of street style and couture in the future, as did some gorgeous retro silk bathrobe and pyjama pants combos.

A run of high-line flared easy trousers ran through the collection, with a battalion of pencil skirts and dresses, often slit at the back.

White buttons and glasses were also prominent as were all the Chanel standards of tweeds and sparkling highly-embroidered sequined pieces.

Kaia Gerber, the daughter of supermodel Cindy Crawford, wore an almost acid tangerine thigh-length two-piece suit, whose shoulders were decked with a frosting of white embroidered flowers and a ruff.

But overall Viard was more sober and subtle than the sometimes brash designs Lagerfeld would dash off.

Viard saved her one revolutionary act for the end.

To the strains of the “I just want to be a woman” refrain of Portishead’s song “Glory Box”, she did away with the wedding dress finale that has traditionally closed Chanel haute couture shows.