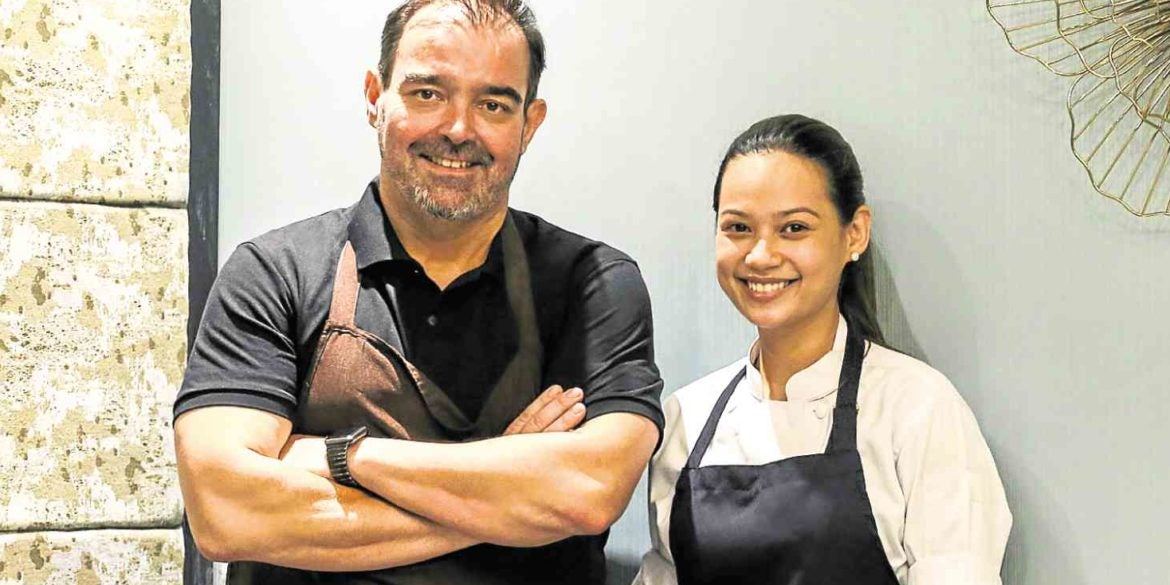 Pinot isn’t exactly along the rows of restaurants and retail stores on bustling Bonifacio High Street, and it has yet to be formally launched. Yet the 60-seater fine-dining restaurant with the handsome wood-and-metal interiors and understated palette of browns, greens and white has been attracting members of Manila’s discerning wine and food communities since its soft opening about a month and a half ago.

Clearly, news travels fast when it involves anything by Markus Gfeller, Pinot’s general manager and head of culinary functions. The Swiss chef, after all, is credited for pioneering fine dining in the country in the 1990s.

“It’s very dangerous to say ‘fine dining’ in the Philippines,” he warns with a chuckle, well aware of how the term can intimidate or turn people away. “I’d like to say we want to do a humble approach to fine dining. Our concept is modern European cuisine that goes well with our other passion for wine, and we have quite a reputable and beautiful wine list.”

Interestingly, so do Pinot’s patrons, who have taken to bringing their own bottles to dinner. Like fine art and watches, wine—especially the covetable and hard to come by—has become the collector’s item du jour, a status symbol and gift to oneself.

“It’s a habit we’ve observed recently,” notes the chef.  Of the many requests to bring and drink their prized possessions at Pinot, Gfeller graciously accedes to them, and will even waive the corkage fee, for as long as guests consume a full meal at the restaurant.

Indeed, much has changed in the local restaurant industry since he first entered the scene in 1993. Through the internet and social media, diners are not only more aware and informed about the food they eat, they’re also very involved, as evidenced by the endless posts of food on Facebook and Instagram, and candid restaurant reviews on apps like Yelp, Trip Advisor and Foursquare.

A chef’s image has evolved as well, influenced no doubt by cooking competition shows featuring celebrity chefs like Gordon Ramsay and his ilk.

“When I came here, people asked me, ‘What do you do?’ I said, ‘I’m a chef,’ and they said, ‘Ano? Kusinero?’” says Gfeller, who, funny enough, goes by the handle @kusinero on Instagram.

“Meantime, professional culinary schools like Enderun (where he taught in its Ortigas branch before it moved its campus to Taguig City), which bring in certification courses with the likes of Alain Ducasse behind them, have elevated the standard of cooks, so much so that if a student really decided to go that path, he brings his entire family along. All of a sudden, his father, mother, sister and brother understand food and go to different dining establishments with a new perspective,” he says.

Gfeller’s own evolution is inevitable; it’s the reason he’s still around after 26 years and counting.

Observing how today’s busy executive doesn’t have time for long, lingering lunches, he opens Pinot only for dinner (from 5 p.m. onward) but satisfies patrons’ all-day appetites with Caffe Freddo, his adjacent establishment with a menu of modern European brunch offerings that operates from 7 a.m. to 11 p.m.

As to where he is now as a chef, Gfeller describes his cooking style as a reflection of his classic roots—approachable, healthy, organic and fresh. “People need to understand what they’re eating and where it comes from,” says the chef who likes to incorporate native grains like black rice and adlai as well as the young soybean edamame in his dishes. “When it comes to meat and seafood, nothing beats freshness and being able to locally source them chilled, not frozen.”

Pinot’s generous seven-course degustacion drives his point home. Flavors are fresh, tasty and uncomplicated, and textures in a dish of multiple ingredients complement each other very well.

A plate of colorful aromatic leaves is perked up with the tartness of goat cheese mousse and thin slices of roasted beets.

The mushroom dashi in a branzino fillet with smoked potato and black garlic has a savory kick to it, and fried oysters over tomato confit and saffron adlai offer a crunchy texture and taste to the usual fresh or baked variety.

A white chocolate flan is a creamy finish to a filling meal, and a spoonful of orange sherbet nicely cools and cleanses the palate.

If one thing hasn’t changed, it’s that he’s maintained his relationships with his longtime suppliers, including the German lady who has been his go-to source of arugula since the ’90s. Back when iceberg lettuce from Baguio was the only form of salad greens (and anything else had to be imported from Australia), the chef came back from Europe with different seeds, including arugula, and asked the German expat to plant them in her farm in Lipa, Batangas.

“She now has her help maintain the business. But I think they totally forgot that prices have increased,” he says and adds with a laugh, “I won’t tell them!”

In his teens, Gfeller—who was born in Bern, Switzerland, to a family that ran a cheese retail store—spent Saturday nights doing odd jobs for extra money at a friend’s neighborhood restaurant. Pouring drinks and washing dishes exposed him to the kitchen environment, particularly the cooks in their white uniforms. “That’s when things sparked for me,” he says.

After culinary school, he cooked for a number of establishments in Switzerland before flying off to Hawaii, where he worked for two years.

From there, he set his sights on Asia—originally Hong Kong, but when the opportunity to work in the Philippines presented itself, he grabbed it.

As executive chef of Grassi’s at the Benpres Building in Ortigas Center (and what was perhaps the first fine dining restaurant outside of a hotel setting), Gfeller was responsible for introducing Filipinos to then unheard-of flavors and ingredients like the aforementioned arugula.

There was the soft-shell crab, which he served as part of a salad. “Filipinos had never been exposed to it at that time, but the irony is that soft-shell crabs are from Bacolod, and they’re meant for export,” he says. Purchasing those that didn’t make the cut (like crabs with a missing leg), the chef cooked them as a tempura and added them to a salad that became a hit.

His lobster cooked three ways (as sashimi, a bisque, and grilled or baked dish) also caused a stir, as did his many ways of presenting pasta. At a time when a plate of spaghetti with tomato sauce counted as fine dining, the chef was dishing out a variety of noodles topped with then sophisticated sauces like pesto and vongole. Now even the popular coffee chains have these pastas, he says.

After five years in Grassi’s, Gfeller left to set up a slew of restaurants. From fine dining, he ventured into mass food production and logistics for SuperFerry, an eye-opening experience that brought him to various parts of the country outside of the urban jungle.

Toward the end of the year, he will expand Pinot to include catering services, something he’s been doing with his other restaurants since the 1990s.

A consultant for some of Enderun’s programs, Gfeller has a day job teaching chefs, chief cooks, and other kitchen staff at the international catering academy of a Norwegian shipping company.

“I feel privileged and it’s the right thing to do,” says Gfeller who also enjoys training his team at Pinot that includes his chef de cuisine, Ciara Fabie Teotico.

“I’m at a stage where I feel tremendous pleasure and fulfillment in giving and sharing knowledge,” he says. “I’m happy where I am. And I have the opportunity to make people happy on a daily basis. That’s the beauty of this profession.” —CONTRIBUTED