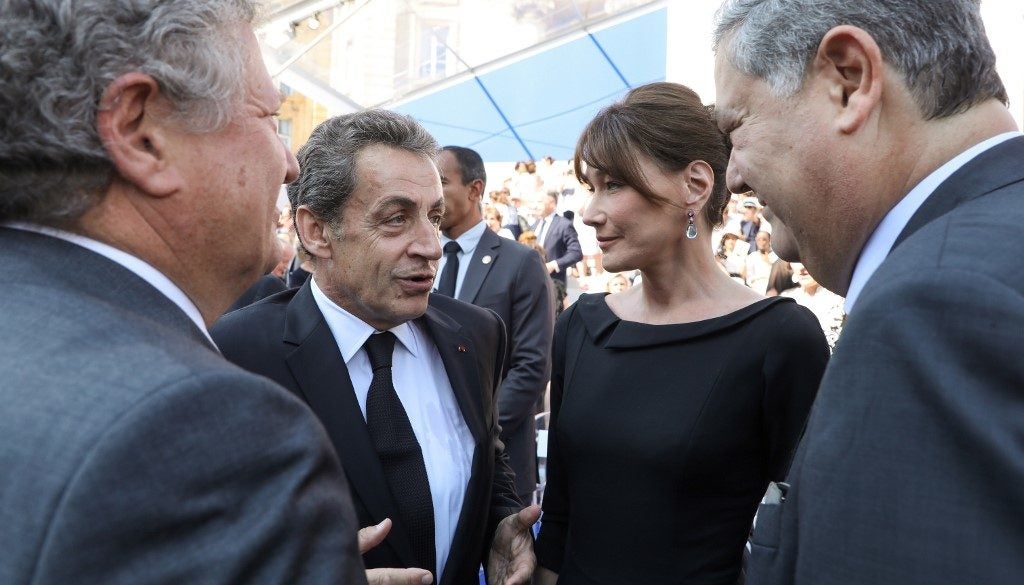 Former French President Nicolas Sarkozy (2ndL) and his wife Carla Bruni (2ndR) talk with the sons of late French politician and Holocaust survivor Simone Veil, Jean Veil (L) and Pierre-Francois Veil as they arrive to attend the burial ceremony for former French politician and Holocaust survivor Simone Veil at the Pantheon in Paris on July 1, 2018. - Former Health Minister, Simone Veil, who passed away on June 30, 2017 became president of the European Parliament and one of France's most revered politicians by advocating the 1975 law legalising abortion in France. She will be only the fifth woman buried at the monument to France's dignitaries, where she will be laid to rest at the Pantheon with her husband Antoine, a high-ranking civil servant who died in 2013. (Photo by ludovic MARIN / POOL / AFP)

As soon as this week’s cover of Paris Match magazine featuring Nicolas Sarkozy and Carla Bruni was released, the questions began: how was the diminutive former French president seemingly taller than his towering wife?

The front-page photoshoot might have sparked speculation the 64-year-old rightwinger was thinking of a political comeback, coming on the heels of his new book called “Passions” which has become a summer best-seller.

But social media users mostly wanted to know how Bruni, a former singer and model who measures 1.75 metres (five foot, nine inches), appeared to be standing up while nuzzling the neck of her husband, who is around 10 cm shorter.

The image sparked a series of cruel photoshopped pictures involving step-ladders and platform shoes before Paris Match put out a statement to deny suggestions it had doctored the image.

“Some people were surprised to see Nicolas Sarkozy taller than his wife Carla Bruni,” the magazine admitted, adding that the photo in question had been taken in June on some steps outside the couple’s home.

“In the image chosen for the cover, Nicolas Sarkozy was on the higher step than his wife,” it added.

Paris Match brought unwelcome attention to Sarkozy’s frame in 2015 with another front-page shot which appeared to show him taller than his wife as he led her across the sand on a beach in Corsica.

The glossy celebrity and news magazine is often used by French politicians for publicity, knowing a flattering photoshoot and intimate interview can put them back in the public eye and spark interest.

Sarkozy has quit politics on two occasions in the past after election defeats, most recently in 2016 when his bid to become the presidential candidate for his rightwing Republicans party failed.

He is still embroiled in multiple corruption investigations dating to his five years in office from 2007-2012 focused on campaign financing and allegations he accepted money from the regime of late Libyan dictator Moamer Kadhafi.

Of course no photoshop in involved. He is obviously standing on the gigantic pile of documents in his corruption case! #PauvreFrance #MeanwhileInFrance #Sarkozy https://t.co/j9pBvdUUxe

He denies all of the charges.

In his new book, he recalls his early years in politics and also touches on his private life, relating how his first wife Cecilia announced her desire for a divorce on the eve of a crucial television debate ahead of his election as president in 2007.

The book has shot to the top of the best-seller lists and is the latest in a long line of his publishing successes which include “Together”, “France for Life” and “Everything for France”.