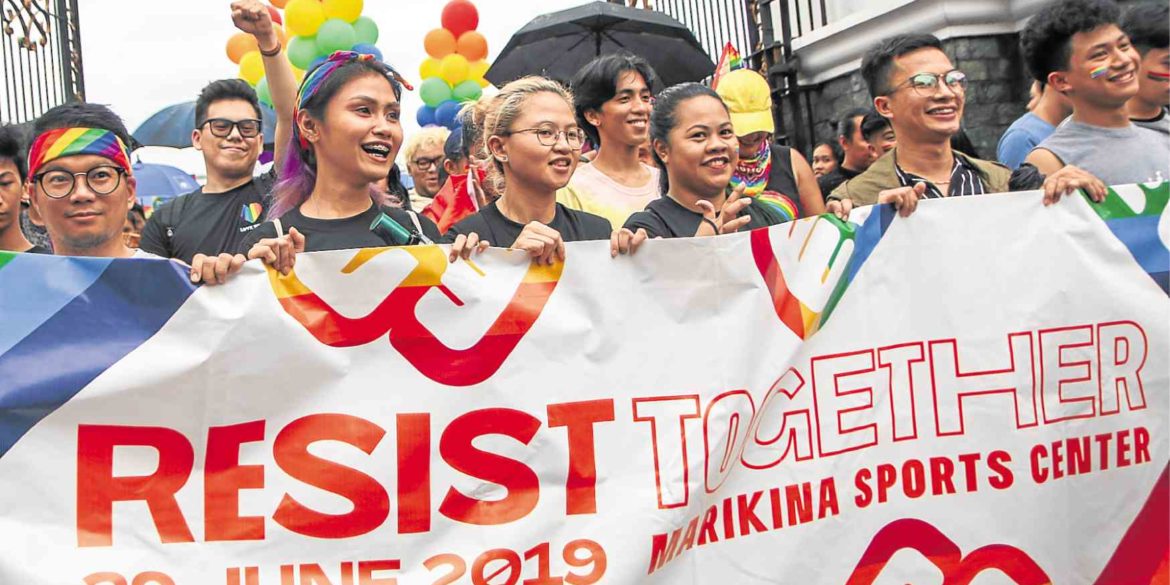 Pride marchers hold up the banner “Resist Together.”

In a country ruled by strong and traditional religious practices and beliefs, the LGBTQIA+ (Lesbian, Gay, Bisexual, Transgender, Queer/Questioning, Intersex, Asexual) community is left with no choice but to either endure being shamed by society or hide its true colors altogether.

But even as its members are targets of discrimination, the community grows by the day. Last year’s annual Metro Manila Pride March drew 25,000 participants. This year, the number of attendees was a whopping 70,000, 80 percent of whom were young adults. It’s proof of people’s willingness to support their friends and family in the LGBTQIA+ community.

Organized by Metro Manila Pride, this year’s Pride March was held once again at Marikina Sports Center. Carrying the theme #ResistTogether, the march was not just a celebration of LGBTQIA+ pride, it was also a stand against prevailing social injustices.

Despite the rains, an array of bright colors bloomed in the march. The stadium was filled with the beautiful smiles and laughter of members and allies alike. Some organizations even gave away free water and snacks to those in attendance.

“This [Pride] celebration was more than resisting discrimination of the third sex,” said Nadine Naomi Terrocampo, a lesbian and one of the many participants of the march. “It aims to propagate equality, not only in the aspect of sexuality, but also in other factors such as race, religion, social status, and disability. Equity for all is indeed one of the most vital things people should aim for.”

Though the freedom to express ourselves is something to take pride in, there is even greater pride in being accepted by the people we love.

And the greatest pride of all? Standing together in a world we can all be proud of. —CONTRIBUTED