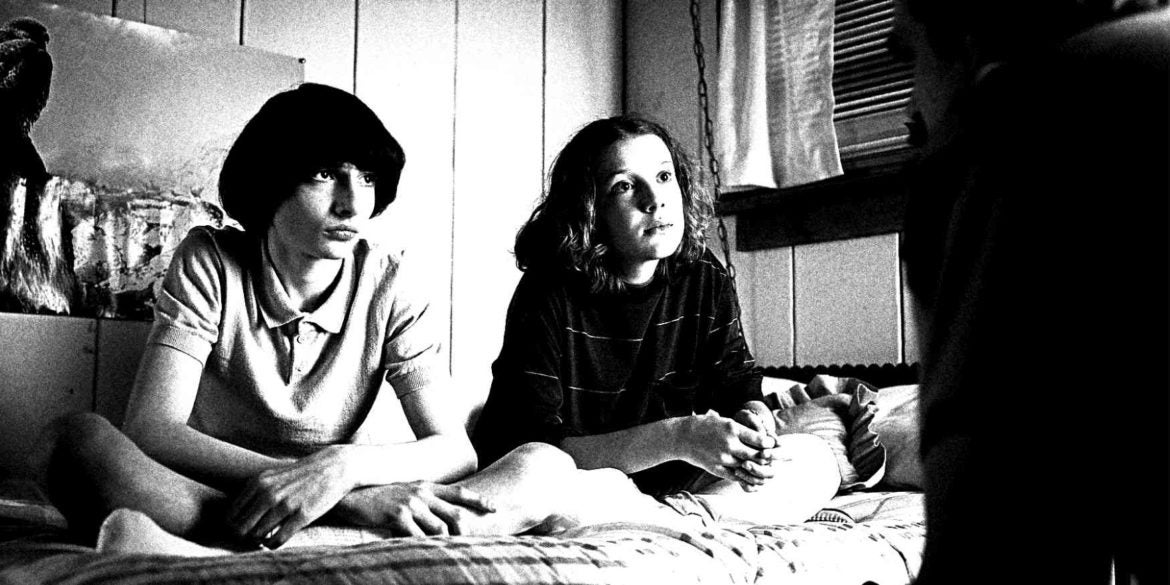 Growing up with the ‘Stranger Things’ kids

TOKYO—“Stop walking like a chicken” were probably the last words you would expect to find in a script about a 1980s sci-fi show where six kids take on flesh-eating Demogorgons controlled by a sinister Mind Flayer from a dark and gooey parallel universe.

But brothers Matt and Ross Duffer, creators of the out-of-this-world Netflix series “Stranger Things” that stars a predominantly young cast, had no choice but to put the no-chicken-walking memo, among other strange things, on the director’s notes.

One day on the set of “Stranger Things” season 2, Finn Wolfhard (Mike), one of the six teenage leads of the show, started walking like a chicken. How does one walk like a chicken? We asked Sadie Sink (Max). Sadie quickly got up from her seat, dropped to a half-squat, started flailing her arms and traipsed while wearing high heels.

If there is a notion that the set of “Stranger Things” is a riot, it’s because it is. Even a 15-minute chat with four of the six teenage cast members already resulted in chuckling, the aforementioned chicken-walking and debating about the lyrics of Caleb’s chicken noodle soup (or instant ramen?) song.

“We’re so close in real life and it really shows on TV. What do we do on set? We just have a lot of fun. We went to Six Flags amusement park, we have sleepovers, we hang out, we pull pranks on each other and we throw food at each other,” said Noah.

“When did we ever not throw food at each other?” asked Sadie.

But these young, extra-experienced, fun-loving stars can turn to work mode when the need arises. They have starred in Broadway shows (Gaten in “Les Miserables” and Sadie in “Annie”), in film (Noah in “Bridge of Spies”), television shows (Caleb in “Blue Bloods”) and even appeared in music videos.

“The Duffers have a lot of trust in us and they really treat us like adults and it’s fun because we can goof around and, when we need to be professional, we will get it done,” Gaten said.

Millions of fans have closely followed the cast of “Stranger Things” the moment they rolled into Netflix in their vintage BMX bikes in 2016. They have battled a predatory humanoid, built an improvised sensory deprivation tank, defeated small but equally terrifying monsters and danced at the Snow Ball.

On this much-awaited third season (19 months of waiting!), super girl Eleven (Millie Bobby Brown), lover boy Mike, Will the Wise, Mad Max, wrist rocket-toting Lucas and the adorable Dustin are back and, as Mike pointed out: “We’re not kids anymore.”

(They really did grow up so fast—on and off cam. Noah and Sadie are several inches taller from the last time we saw them when they visited Manila in 2017. Caleb has a mustache and Gaten wore dental braces.)

In the first episode we see Eleven and Mike make out to the music of REO Speedwagon. Lucas’ younger sister Erica, like most kids her age, have become the mall rats of Starcourt—the coolest place to be in Hawkins. Starcourt is also where redeemed jock/America’s baby sitter Steve works as an ice cream scooper with the sardonic polyglot Robin. Dustin just arrived from summer camp with his latest invention—a super ham radio so he could reach his apocryphal girlfriend Suzie. Billy is the new lifeguard at the local pool where he becomes the apple of the eyes of Hawkins’ moms. Jonathan and Nancy are working as interns at small-town paper Hawkins Post. Chief Jim Hopper, meanwhile, struggles at parenting an adolescent Eleven.

Then there’s Will, sweet and innocent, who just wants to play Dungeons & Dragons. There are subplots about relationships, parental boundaries, Hollywood crushes (Ralph Macchio) and even a makeover montage.

If season 2 ended with cutesy smooches, season 3 started with make out sessions.

Caleb and Sadie recounted to Super their first ever kiss in real and reel life during the Snow Ball scene of last season’s finale.

“It wasn’t that nice,” Caleb said.

“It looks a lot better in the scene,” said the now 17-year-old Sadie. They had to film the kissing scene in the middle of the dance floor while everyone was swaying to “Every Breath You Take.”

The now 5’9” Caleb said that what went after multiple takes of the scene was an awkward moment where 200 extras kept teasing “ooh.”

In this third season, there was also the inevitable division between the group: girls and boys. Skateboard-riding, Dig Dug-playing Max introduces Eggo-loving Eleven to the world of slumber parties, scrunchies and the hottest fashion items of the season.

“I remember reading the script. I’m like why is she (Max) reading magazines and talking about boys with Eleven. What is this? It was like a whole new side of her and I think that comes with her being more comfortable in Hawkins,” Sadie told Super.

She added that the friendships have evolved from role playing in the Wheelers’ basement now that Eleven and Mike and Max and Lucas have paired up.

“What happens when the kids grow up?” has been a lingering question from fans and critics alike. The answer was simple: The monster grows up as well.

Set in the summer of 1985 Hawkins, Indiana, the Season 3 gang faces a bigger, more malevolent villain than Demodogs, Demogorgons and the Mind Flayer. As if that is not enough, “comrades” that are scarier than Dr. Brenner have also arrived in Hawkins.

What is supposed to be a carefree summer meant to be spent at the new Starcourt Mall turns into another adventure to save the small town of Hawkins—and the whole humankind. Once again unlikely alliances have been forged in the midst of international threat. They are armed with walkie talkies, a slingshot, guns and fireworks.

The Mind Flayer is still here and it’s out for vengeance. Does this mean that sweet Will Byers will once again be possessed, tormented or traumatized by an evil monster from the Nether? There was a clamor from the internet (think Justice for Barb) for Will Byers to just be happy after all the hardships he experienced at the hands of the Demogorgon and the Mind Flayer.

“No one really gets a break from anything. That’s kind of like our show. Everyone suffers. Will’s suffered from so much and this season everyone’s hoping he finally gets a break. But the monsters still, like linger inside of him. And he’s still not fully like there yet,” Noah said.

As if a physical and mental connection to a monster is not enough of a problem, Will struggles as the late bloomer who only wants to dress up in costumes and play D&D with his girlfriend-obsessed friends.

But Noah, who has done an outstanding performance as Will throughout the series, has two things to say about it: “I love season 3. It’s definitely my favorite one yet.”