First Draft and Gilda: Moving on, not out | Inquirer Lifestyle ❮ ❯ 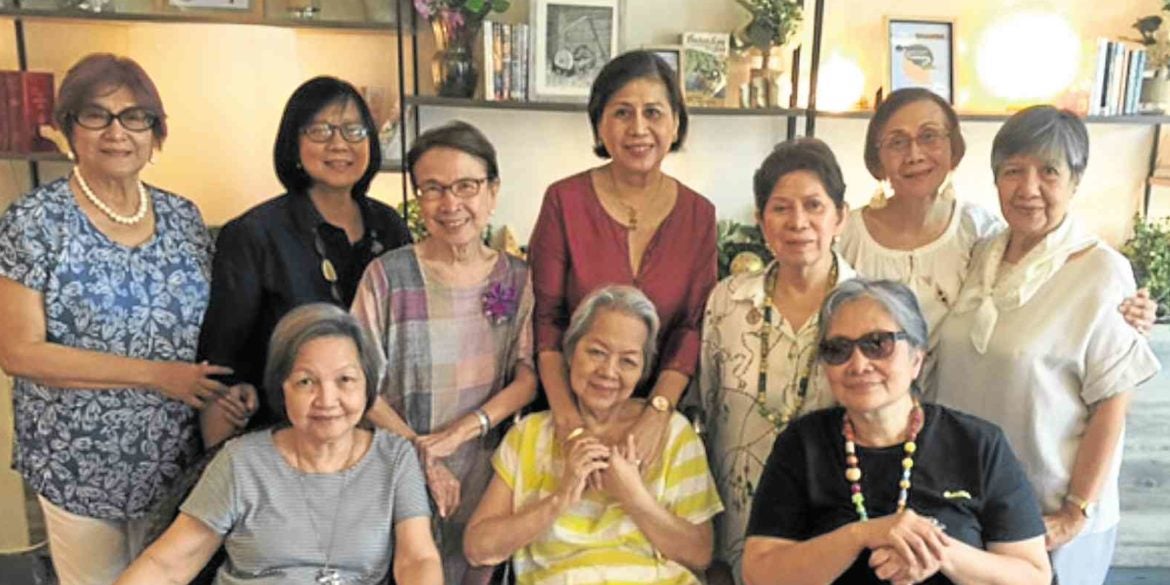 First Draft and Gilda: Moving on, not out

In 2002, a group of us 10 women was put together by Gilda Cordero Fernando as a writing club. Calling ourselves First Draft, we met monthly at first, then bimonthly for 10 straight years, critiquing each other’s work over meals in each other’s homes and later in restaurants we wanted to explore—we were sort of food adventurers, too.

We laughed and shared our thoughts, our frustrations, our dreams, and bonded in a sisterhood founded on love of reading and writing, actually on love as a feeling and a subject. Only naturally our favorite theme was, of course, love in all its forms; having lived long enough, we felt we knew the subject well.

This intimacy brought us closer, and, as only aging women can, we fought and made up, and didn’t really care to clog up our memories with the details.

Some months ago, we started planning a reunion around Gilda’s birthday on June 4, but, taking long to find a day we could all be free, we overshot the occasion by more than two weeks. The planning had been all done by e-mail, since the one in charge, Rita Ledesma, refuses to own a cell phone, as a matter of principle.

Rita chose the venue: The Happy Garden Café, owned and managed by another good friend, Annabel Tanco of Bizu.

From the bright tasteful setting amid green plants and a sort of waterfall on the wall to the healthy but imaginative and yummy menu, it was truly a perfect place—you can trust Rita for those things.

So much has happened and changed.

Gilda, for one thing, was turning 89. She arrived in a wheelchair with her caregiver. She was undeniably weaker and less responsive, but the endearing naughtiness remained evident in that knowing smile. Her seemingly poreless skin was youthful and flawless since the day I met her—long before First Draft.

Lorna Tirol came all the way from her home in Antipolo, on a Friday, the day she could leave her husband, Vic, who has been ill, to a caregiver.

Melinda de Jesus had just arrived from Kyoto, where her husband, D.J., had his contract with a university there ending. Karina Bolasco had been in Kyoto, too, for a job contract. Something about Japan was evident in their bright disposition, which I kind of understand—it’s a favorite destination for us as well.

Mariel Francisco and I had bumped into each other at political events during the campaign, and, being on the same side, we consoled each other in defeat. Edna Manlapaz and I had somehow never lost touch, managing a breakfast now and then.

Babeth Lolarga and I, and her husband, Rolly, and mine, Vergel, good friends from way back, have our own reunion every time we go to Baguio, at least twice a year; she and I, with Vergel and Pablo Tariman, have time together when she herself comes to town. She had happened to be in Manila for several birthday lunches at the time our reunion was becoming realized; in fact, her birthday was closer to the date than Gilda’s own.

Peng Arriola’s birthday was close, but, like Gilda’s, it had already passed. I don’t know who I cherished more, Peng or her late husband, hilarious Manny, Vergel’s old pal. Now I’m becoming just as fond of their daughter, Oya, through whom I message Peng.

It was Peng who suggested we meet every other month. I’m a lousy organizer, but I’m willing to do it for the next one in August, Edna’s birthday month, which should include July-born, Mellie, whom Vergel and I are more often with.

I brought a few pictures I had taken of us First Drafters. Babeth kept a memory log herself, including details, like venues and even menus. Rita kept the favorite essays she had written all those 10 years. Edna was hopeful we could put together something interesting for posterity. We can go on and on meeting like this.

Not for lack of trying, men writers have admitted they could never come close to having anything like what we had. In fact, not a few have expressed some envy. Hearing about that, in our early days, Gilda suggested we invite some men; it never happened.

I guess men don’t feel comfortable baring their heart and soul over lunch, much less witnessing us women do it. After women pour out their sentimientos, they feel better already. Not so the men; they feel bitin, and must do something about it—now that it’s out there! This seems the reason men’s relationships, though concededly deeply rooted in camaraderie, are hardly intimate, usually good only over sports or poker, and, if at all, self-revelatory only fueled by drinks.

First Draft as a writing group is no more, senior life has overtaken it. We have all moved on in different directions, although to adventures still revolving around writing. Gilda taught us to be candid and not afraid to be ourselves. She often chastised our timidity for telling it like it is. She was quite strict about authenticity—“… readers can spot fakeness,” she warned.

Whenever we wrote about a personality, she urged we show his negative side, too, for credibility. My own husband said, “Subjects don’t have to be saints, just true.”

Their words somehow affirm Stephen King’s when he wrote in his book “On Writing,” “If you begin to lie about what you know and feel while you’re down there… (meaning, down in the jungles of actual composition, where you must take your objective one bloody word at a time) everything falls down… lying is the great un-repairable fault.”

That broke the dam for me. Thanks to Gilda, First Draft, and my husband, I’m going on my eighth year writing this column and having a time of it.