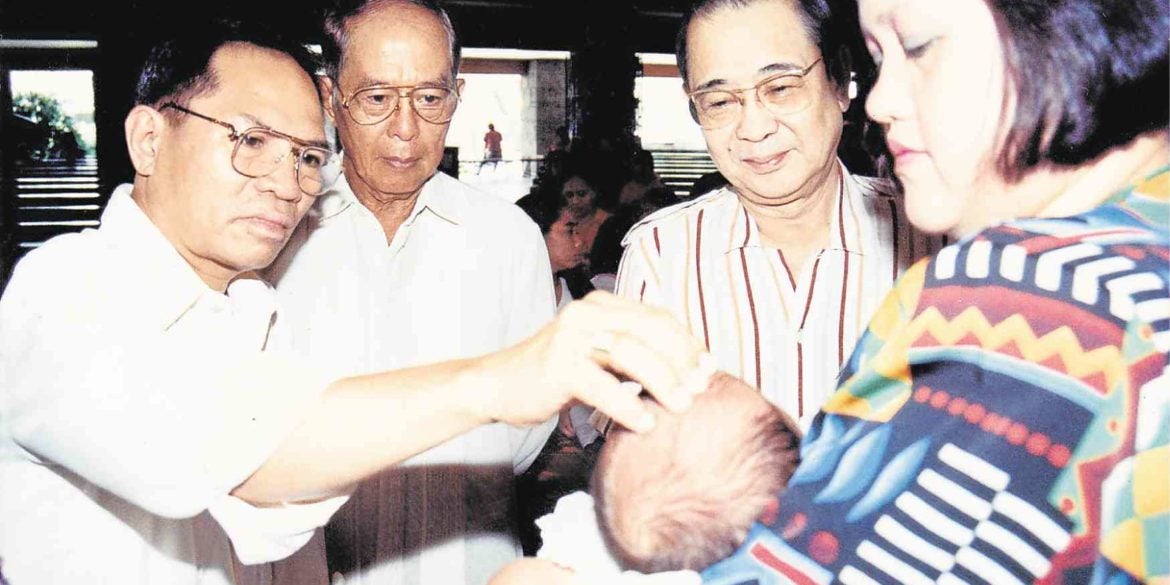 Dr. Raul Forés (second from right) at the christening of the author’s daughter, with, from left, former broadcast executive Joe Escaner, Dr. Isidro Benitez, and the author

Dr. Raul G. Forés: A legacy of kindness and generosity

The sisters of Mother Teresa would send the seriously ill to Makati Med. Dr. Forés himself took care of these patients in Room 200

There are a number of people who touch our lives and leave, but remain in our hearts forever. They influence us, teach us life lessons, and offer us treasured friendship.

One such person is Dr. Raul G. Forés, former president and chief executive officer and medical director of Makati Medical Center (Makati Med), known in the hospital as “RG.”

In the early ’90s, I was introduced to Dr. Forés by a common friend, Ethel S. Timbol, then lifestyle editor of Manila Bulletin. I would accompany Ethel on her visits to Makati Med, and got to know Dr. Forés and his plans and programs for the hospital. Eventually, I became the hospital’s public relations consultant.

When Dr. Forés joined the hospital in 1969, he was the youngest among the founders. In 1990 he became president, CEO and medical director. It was then that he coined the hospital’s slogan and guiding principle: “The Hospital with a Heart.”

I witnessed the many ways Dr. Forés led by example. He showed concern for the needs of others and was very unselfish and dedicated to the well-being of others.

He spearheaded the hospital’s commitment to giving medical help to the underprivileged. He believed in sharing his blessings and giving back to the community. He found ways to help continuously the less fortunate through the Makati Medical Alumni Association.

Because he cared for patients, Dr. Forés initiated a lot of development initiatives during his term. Among these were furnishing the Makati Medical Center emergency room with the latest life support equipment.

He encouraged new technologies and medical breakthroughs. I remember one afternoon when he asked me to organize a press conference for one of these breakthroughs.

He was in the doctors’ lounge answering queries when he stopped and approached me. With just one look, he noticed that I wasn’t well. He had my blood pressure checked and it turned out to be very high. He gave instructions for my immediate confinement.

I remember times I would go to Dr. Forés’ office for a meeting and would see several nuns in blue and white habits and simple slippers from the Missionaries of Charity (of Mother Teresa), a congregation that serves the poor all over the world, based in Tondo, Manila. Numerous patients who sought their help could not even afford a single medicine tablet.

The sisters would send the seriously ill, among them with rare and complicated diseases, to Makati Med. Dr. Forés himself took care of these patients in Room 200. He devoted his Monday mornings tending to them, assisted by his staff. I would see the long queue from this clinic, winding around the sidewalk of that building.

On other days, he was in his clinic, where there were patients from all walks of life. It was first come, first served, rich and poor. I thought the “G” in his name (Raul G. Forés) stood for “generous,” as he did not charge priests, nuns, pastors, missionaries, and hospital employees’ relatives and friends, among others.

Dr. Forés never charged me for my checkups and referred me to a very good OB-gyne, Dr. Isidro Benitez, when I was pregnant with my youngest daughter, Desiree. Both Dr. Forés and Dr. Benitez took care of me, aware of my problems during my first pregnancy.

I attended the launch of one of the hospital’s programs in August 1995, and both doctors noticed my strange countenance. Since I was due to give birth in September, I was again ordered to stay in the hospital.

I gave birth to Des on Sept. 8, 1995, by caesarian section. During that time, the new wing of the fifth floor was scheduled to be inaugurated. Dr. Forés sent me on a “forced” vacation by not allowing me to go home after seven days. I stayed in the hospital for another week and took care of media coverage of the inauguration in a wheelchair!

Imagine my surprise when I was told that I had a “guardian angel,” and was not billed a single cent for my delivery.

Dr. Forés had to be a ninong of my Desiree. I wanted my little girl and other children to emulate his goodness and other wonderful traits. He was a man of few words, so formidable with his impish smile. When he talked, everyone listened.

Even if he wasn’t a pediatrician, Dr. Forés often attended to my two boys, Brian and Patrick, then only 8 and 6 years old. He was very patient with them during these visits.

It was a great honor when he attended a surprise party for me at the former Euphoria disco. I was so touched that Dr. Forés found time to be there, knowing the busy days he had. There he was, probably straight from the hospital, looking dapper in his barong Tagalog. I still cherish the memory of that evening, seeing him relaxing and enjoying a few drinks with my other friends.

Dr. Raul G. Forés may have left us, but his years of hard work and sacrifice left a rich legacy of love and kindness.

We will miss you, RG! —CONTRIBUTED