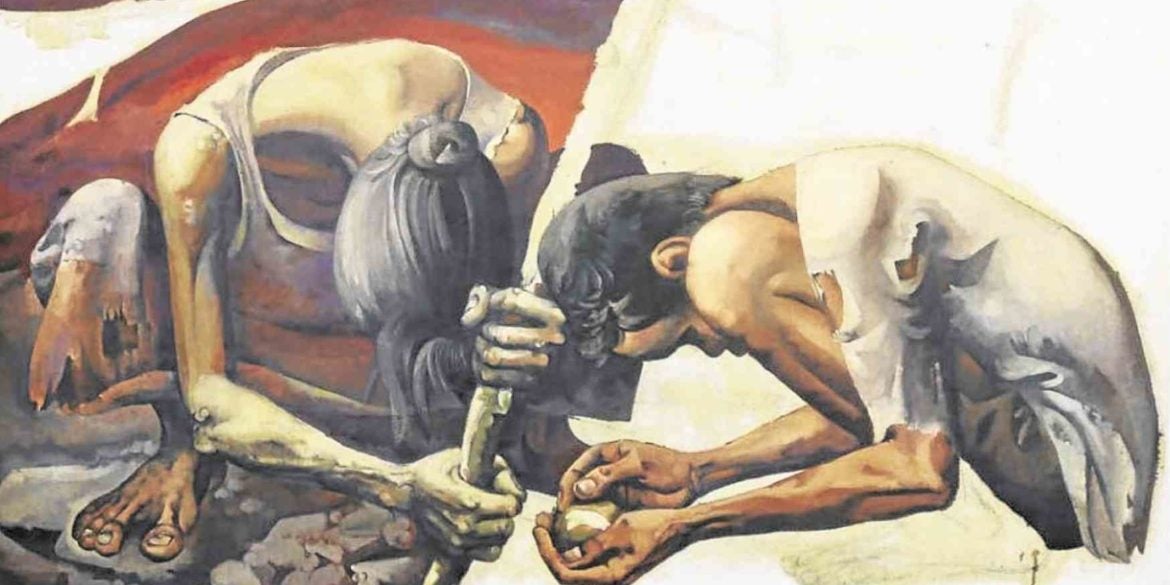 Kamote or sweet potato is one of the many foreign crops immigrants introduced to the Philippines from Mexico in the 16th century. Transported to our shores onboard the fabled Manila galleons, the kamote was exported from the Philippines to Fujian, China, in the same period, where it was cultivated as a staple to stem a major crop failure.

Kamote is rooted in the Mexican or Nauhatl camotli, like other crop immigrants that end with -te, as in sayote and achuete. Kamote is a starchy root vegetable harvested underground, as famously depicted in the recently controversial work “Camote Diggers” by Carlos V. “Botong” Francisco, National Artist for Painting.

It is not known to many that Francisco made “Camote Eaters” (1946, private collection), heralded as the artist’s homage to Van Gogh’s 1885 “Potato Eaters,” and “Camote Diggers” in two versions: a small finished oil on canvas (27 x 38 centimeters), signed and dated 1969 with a dedication on the back: “To my friend Tony Kayanan, in admiration, Botong Francisco”; and a larger unfinished and unsigned version (87 x 149 cm), also dated 1969.

A day after the auction, a front-page news item read, “In an unprecedented move, Botong Francisco’s ‘Camote Diggers’ will be the first Philippine work successfully auctioned to be donated to a national institution.”

It’s a spin that unravels when you read the article to the end, because the consignor, who chose to remain anonymous, withdrew the painting, took the loss, and offered to donate the hot item to a national institution, Leon Gallery’s official statement went—“to resolve any issues and the possible politicization of this great masterpiece.”

Francisco’s “Camote Diggers” is an important piece for sentimental reasons, as it was left unfinished when Francisco died after a heart attack in 1969, and for historical reasons, as a work that illustrates Francisco’s working methods and creative process.

Francisco depicts a wretched old woman and a young man, possibly her son, digging for camote in a searing commentary on the plight of the poor, the red, white and blue on the finished portion of the painting a subliminal reference to the Philippine flag, an allusion to our sad republic, then and now.

“Camote Diggers” was displayed on an easel in Francisco’s studio before it made its way to Malacañang sometime in 1973, following Francisco’s posthumous elevation to National Artist. Francisco’s widow presented it as a gift to then President Ferdinand Marcos and First Lady Imelda Marcos in gratitude for their friendship and patronage, since Francisco’s last commissioned mural was “The Life of Ferdinand Marcos” that now hangs in the Marcos home in San Juan.

In an exclusive interview with Inquirer Lifestyle editor Thelma San Juan, the anonymous consignor said that he acquired the painting in 2004 from the son of a government official, that he “vaguely remembered seeing something similar to the painting at Malacañang in the late ’70s or early ’80s, in a security guard room just outside the office of then President Marcos,” that he asked Ms Marcos, through a third party, if she remembered the painting, and upon receiving a negative reply, proceeded with the acquisition.

“Camote Diggers” had been in the possession of the anonymous consignor for the past 15 years, and had been publicly exhibited in the Yuchengco Museum with nobody raising questions on its provenance or ownership.

His promised donation to a national institution should have quelled the controversy, but ethical issues remain to be discussed and hopefully resolved.

First, provenance or the sequence of ownership has to be established all the way back to Francisco, and there is a gap between the Marcoses receiving the painting at Malacañang in 1973 and the acquisition of the present owner in 2004.

When did the painting leave Malacañang? Was it before or after the 1986 People Power Revolt that drove the Marcoses into exile? Did the current owner know or suspect that the painting was the same one he vaguely remembers seeing at Malacañang? Did his due diligence extend to asking the seller if he had a clean title to sell it?

Second, the lawyer representing the Francisco family, who contacted Leon Gallery barely a week before the sale asking for its provenance, has to answer two questions: 1) why his client did not raise the question of ownership during the 15 years “Camote Diggers” was publicly displayed at the Yuchengco Museum, its ownership clearly stated in recent books and exhibition catalogs on the artist; and 2) if it is true that he demanded P5 million from the auction house and the seller to settle the issue, and this sum was not for his client, the Francisco family, but for some foundation.

Third, this is not the first time the Francisco family has claimed ownership of paintings already in the possession of collectors who acquired them directly from the artist by sale or as gifts.

In the memoirs of the late Dr. Solita F. Camara Besa “Up Close With Me” (UP Press, 2004), she answers the libelous assertions of the Francisco family, narrating how she acquired, through purchase and as gifts, two Francisco paintings the family claims were stolen from them.

Personal gift, or gift to the state?

In the case of the “Camote Diggers,” the lawyer claims Francisco’s widow presented it to Malacañang and to the nation through the Marcoses, something that cannot be proven without a formal deed of donation, or an affidavit clarifying this in 1973.

The real issue in this case is distinguishing between personal gifts to the Marcoses and gifts to the State; are all gifts to the President or government employees presumed to be gifts to the nation? If so, then the promised “donation to a national institution” of “Camote Diggers” is actually a restoration to its rightful owner.

Our laws are silent on this, except for a vague provision regarding gifts in Section 2 of RA 3019 or the Anti-Graft and Corrupt Practices Act:

“…includes the act of accepting directly or indirectly a gift from a person other than a member of the public officer’s immediate family, in behalf of himself or of any member of his family or relative within the fourth civil degree, either by consanguinity or affinity, even on the occasion of a family celebration or national festivity like Christmas, if the value of the gift is under the circumstances manifestly excessive.”

What about the exception in Section 14 of the same law: “Unsolicited gifts or presents of small or insignificant value offered or given as a mere ordinary token of gratitude or friendship according to local customs or usage, shall be excepted from the provisions of this Act.”

How do we quantify “manifestly excessive” and “small or insignificant value?”

Perhaps a law should be enacted following that of the US Gifts and Decorations Act that presently provides $390 as the value of allowable gifts and adjusts this amount every three years. In principle, all gifts to US Federal employees and officials over $390 are not allowed except in cases when:

All gifts to Presidents of the United States over $390 are accepted and turned over to the State Department, which includes this in the annual registry of gifts received. If a President wishes to keep the gift, he may do so by acquiring it at its assessed value.

In the Philippines, when a President leaves Malacañang, he or she takes all “personal effects” with him. In an extreme case, the outgoing mayor of Cebu stripped his office clean, leaving his successor without floor tiles and toilet bowl, claiming that all office improvements were paid out of his own pocket.

The overheated art market is rife with gossip and controversy that could be minimized if due diligence is exercised by buyer, seller and auction house regarding authenticity, provenance and ownership.