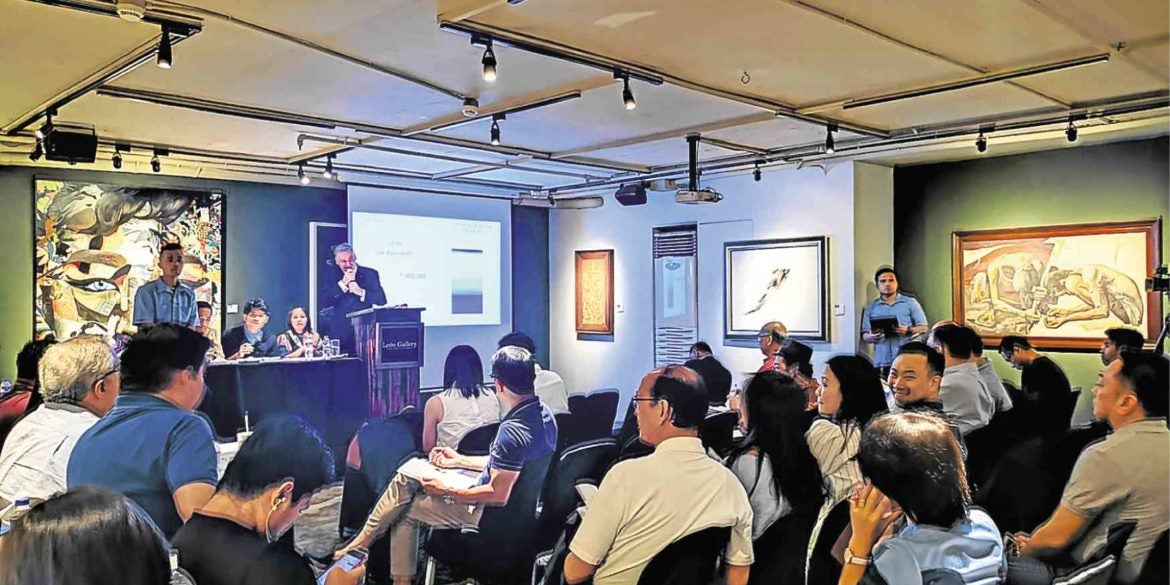 Carlos “Botong” Francisco’s final work, the unfinished “Camote Diggers,” might have ended up being more controversial than anyone intended it to be, but its sale wasn’t exactly the most exciting moment during León Gallery’s “The Spectacular Mid-Year Auction” recently.

The distinction belongs to lot 86, consisting of two pages of a handwritten letter by Gen. Paciano Rizal, older brother of Jose Rizal. Dated May 8, 1897, the letter is addressed to Gen.
Emilio Jacinto, requesting that Paciano be given rifles and ammunition “at the earliest possible time.”

From a starting bid of P60,000 the lot was seemingly on its way to be declared sold at P170,000 by the auctioneer until an auction paddle was raised at the very last second. It was at this point that bidding for the lot became intense, much to the entertainment of everyone else in the room, as two bidders tried to outdo one another until finally the letter was sold for P500,000, not including buyer’s premium.

A large cabinet of narra wood adorned with kamagong, lanite, and carabao bone with several hidden compartments, it’s bespoke furniture of the highest quality. Early Filipino furniture historian Milagros Covarrubias-Jamir went as far as describing it as “the crowning glory of Baliuag-style regional furniture.” From a starting bid of P1.4 million, the “altar comoda” fetched for P7.5 million including buyer’s premium.

All eight Amorsolo paintings sold with two breaking the P8 million mark after buyer’s premium: “Tobacco Maiden” and “The Bathers.” Their provenance could be traced back to La Tabacalera in Barcelona, Spain.

“Loneliness Remembers What Happiness Forgets” might very well be one of Andres Barrioquinto’s best works and whoever paid P9.3 million for it apparently feels the same.

The painting is a tribute, in a sense, to Izumo no Okuni who was the originator of kabuki theater. And though the work is seemingly overcrowded with different elements from the Japanese classical dance-drama reflected on the subject’s face, the painting curiously provides a sense of calm at the same time when focus is shifted to its bright blue eyes.

As for the aforementioned Botong piece, which sold for P23.3 million, both consignor and buyer have agreed to donate the painting to a still unnamed art institution.

“Camote Diggers” became the social-media trending topic in the local art circle after the heirs of Botong Francisco sent a letter to León Gallery days before the auction, inquiring how the work came to be in their possession when it “should be in Malacañang.” Soon after, a photo of the artist’s wife Rosalina along with her two children surfaced, showing the presentation of the work to President Ferdinand Marcos and his wife Imelda at Malacañang as a “gift” after Botong died in 1969.

As reported by the Inquirer, an official statement released by León Gallery director Jaime Ponce de León said that the decision to donate “Camote Diggers” to a museum was made “to avoid further controversy and possible politicization of this great masterpiece.” —CONTRIBUTED