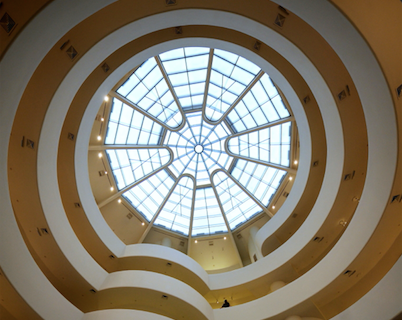 A view of the central dome and interior walkways at the Guggenheim Museum in New York on May 14, 2009. Image: AFP/Stan Honda

Eight masterworks by United States architect Frank Lloyd Wright, including the Guggenheim Museum in New York, were selected as World Heritage sites Sunday, a first in the field of architecture for the U.S.

Wright, who died in 1959, was cited for his influential 20th-century designs that incorporated organic motives, blurred boundaries between the inside and outside, and made unprecedented use of steel and concrete.

UNESCO’s World Heritage Committee agreed on the designation at a meeting in Baku, Azerbaijan, along with the landscape of the Prosecco wine region in Italy.

The Wright-designed buildings chosen for the designation include Fallingwater, a spectacular house built over a waterfall in Mill Run, Pennsylvania.

The Guggenheim in New York, perhaps the architect’s best-known creation, is famous for its spiral shape recalling a nautilus shell.

“Together, the buildings showcase Wright’s influence on the course of architecture around the world,” the U.S. State Department said in welcoming the honor.

The group joins 23 other World Heritage sites in the U.S. but is the first in the field of architecture. JB