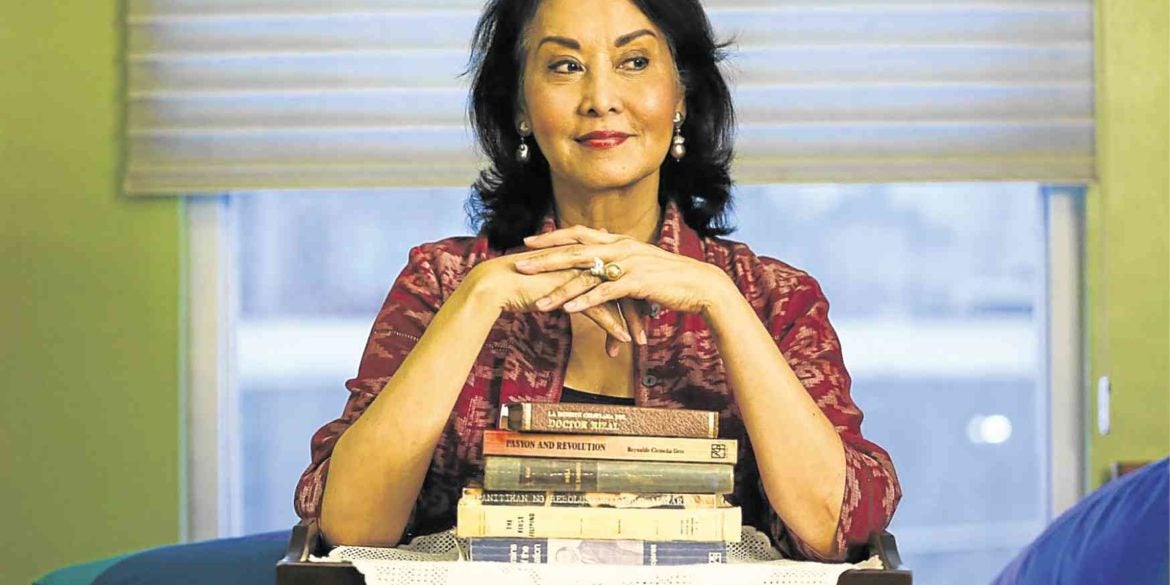 Looking over Gemma Cruz Araneta’s shoulder to take a peek at the cover of her new book, I notice that the keys on her iMac are nearly worn through, the letters almost illegible from sustained use.

Even accounting for the long, lacquered nails she cultivates, it takes a lot of typing to wear out a keyboard.

It is a reminder—and a necessary one, considering that her Wikipedia entry still identifies her as a “beauty pageant title holder”—that an abiding passion for the written word has been one of the constants in her life.

Starting with “Makisig, the Little Hero of Mactan,” published in 1963 (the year before she became the first Asian to win the Miss International title), Araneta has published seven books, fiction and non-fiction.

On July 30, the first anniversary of her mother’s death, she will launch her eighth.

“50 Years in Hollywood,” a compilation of selected newspaper columns written over a 13-year period, sheds light on a still-obscure and often misunderstood chapter in our history: the American colonial period.

As she writes in her foreword:

“‘Three hundred years in a convent and 50 years in Hollywood’—that was how Carmen Guerrero Nakpil, my famous mother, described Philippine history in a nutshell. That is her most unforgettable quote, but lamentably, the most plagiarized, poached and pirated.

“I dare say that no one else, neither historian nor chronicler, poet nor essayist could have devised such a condensed yet brilliant description of our history. Neither the eminent Teodoro Agoncillo, nor fearsome Renato Constantino, nor trailblazers Epifanio de los Santos and Gregorio Zaide, nor any other writer, journalist, novelist or historian, Filipino or foreigner, young or old, could have thought of such a deliciously sardonic clause that distills the essence of our ill-fated history.

“That period has always fascinated me because it’s one of the most obscure periods in our history,” says Araneta. “It’s not taught in schools, they just sort of gloss over it.”

In the chapter titled “Afraid of History?,” Araneta quotes the eminent constitutionalist Felipe Calderon lamenting how students failed to pass entrance exams because they could not answer questions on Philippine history.

Little seems to have changed since then. If anything, we seem to be even more clueless about the American imperial adventure in our shores. How else can we account for the puzzlement and confusion surrounding last year’s return of the Balangiga bells from the US?

Most Filipinos seem to have only the most nebulous idea that we were, once upon a time, at war with the US.

Writing in clear, non-academic prose, Araneta hopes to address what she calls our “national amnesia” regarding this crucial stage in our development as a nation.

“This book is engaging because the author is somehow part of the action,” writes historian Jaime Balcos Veneracion, Ph.D., in his introduction.

“Gemma’s upbringing must have been fascinating, surrounded with relatives (or their descendants) who were main actors during the period that led to the birth of the nation… One can imagine a young Gemma Cruz learning the nuances and contexts of when history was being made just by listening to her mother.”

One might say Araneta imbibed a sense of history from the cradle. As a child, her grandmother would sing her to sleep with anti-American songs from old zarzuelas.

“We didn’t know what they meant,” she recalls. “Later, my mommy explained: ’Your grandmother went through that period. She was born in 1886 and went through the Philippine revolution. Her father was the anti-American zarzuelista Gabriel Beato Francisco, and her father-in-law Leon Ma. Guerrero was part of Aguinaldo’s Malolos government.’”

These “master classes” often took place at the dinner table.

“Every year, on Feb. 4, she would give us, her five offspring, a master class,” she writes in the chapter titled “Her master class.”

“She would relate the slope of events that led to the birth of the First Republic, the first in Asia, the fruit of the Philippine Revolution, and how the United States of America crushed it… A born storyteller, my mother would give a stunning account of how the Philippine-American War began: Brave young soldiers, Filipinos like us, were guarding the San Juan bridge, at the agreed dividing line between the US forces and the army of the Republic of the Philippines. We were living in San Juan, in fact, we all grew up in that town (now a city) which made her history lessons all the more significant and exciting. Once she took us to the San Juan Bridge after which we all felt we had a stake in what happened before we were even born. On this site, she would say, the very first shot, which started the Filipino-American War of 1899, was fired.”

When Nakpil learned that Araneta’s freshman history class at Maryknoll would be taught by an American nun, she had her enroll for a summer history course at the University of the Philippines, perhaps to “inoculate” her against any distortions or misrepresentations that might ensue.

“My mother purposefully stoked my interest in Philippine history,” she writes in her foreword. “She used to say I should write about nothing else, to keep myself out of trouble.”

It didn’t always work. In the early 1970s, she decided to take a plunge into the roiling stream of history by joining the Leftist Malayang Kilusan ng Kababaihan (Makibaka), a move that placed her on the radar of the martial law regime.

Fortunately for us, she also learned from her mother how to share this knowledge, through the written word.

“She encouraged me,” recalls Araneta. “When I was nine years old she gave me space in a women’s magazine. There was a children’s page, and I would interview children my age with creative hobbies. That was fun. With the money I earned, I went to Baguio with my mother.”

One could have found no better teacher than Nakpil, one of the most elegant prose stylists in English that the country has produced.

“My mother used to say, ‘When you write your column make sure that a 12-year-old can understand it,” she recalls. “When I was 12, she would read her columns to me before sending them to the newspaper, and she would ask, ‘Did you understand it?’ And if there was a part I didn’t understand, she would change it.”

Nakpil also had another rule: no verbose sentences.

“Each word has to have its own value,” she recalls. “It’s a good discipline to say what you want to say in one sentence instead of five sentences.”

At one point, Araneta even considered taking up journalism—a new course at the time.

“My mother said, ‘You don’t have to study journalism; you’re not going to lay out a page. You’re going to write!’”

And write she has.

“Sometimes I hear myself sounding like my mother,” she says. “Specially when I talk to my children and grandchildren. I guess it’s inevitable.”

With another imperial power virtually at our gates, and our leaders seemingly as naïve about its intentions as Aguinaldo was about the Americans’, now might be a good time to cram the lessons we failed to learn the last time around.