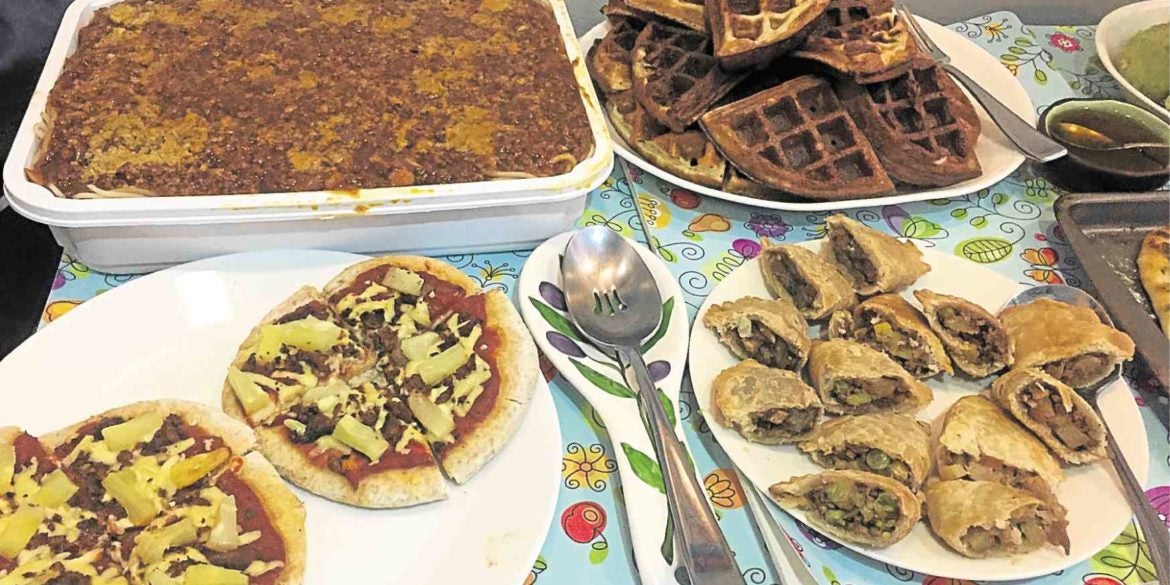 My daughter Juno recently turned 4, so we had a small lunch for family in our home to celebrate. She and her 8-year-old brother Jack love the show “Teen Titans Go!” on Netflix, so we worked with that theme. I enjoy watching the show with them, too, as it’s super funny and the soundtrack is tongue-in-cheek ’80s.

Beast Boy, one of the characters in the cartoon, is vegan (which makes sense, given that his superpower is to turn into any animal). There are episodes where they explore veganism, but never in a sanctimonious way and always with great hilarity.

My husband and all our guests are omnivores, while the kids and I are mostly vegetarian (meaning we still eat dairy and eggs sometimes). Our spread revolved around the show’s episode highlights, so in keeping with the “Teen Titans” theme, I made vegan Beast Boy burritos (store-bought spinach wrap with tomato brown rice, homemade mushroom chorizo and cheese) with vegan sour cream and vegan pesto pizza with tomato and basil. It’s a small thing, but the kids felt helpful plucking the basil leaves from our tiny garden, a practical reminder for them where our food comes from.

It may be hard to believe, but it was very easy to veganize guacamole, sour cream from soaked cashews (glutenfreeveganpantry.com) and the cheeses from coconut milk (thehiddenveggies.com and veggiesdontbite.com).

Since Hawaiian pizza is a family favorite when eating out (the kids pluck out the ham), I also made vegan chorizo and pineapple mini pizzas using store-bought whole-wheat pitas and followed a recipe for mushroom chorizo taco filling (used the same for the burritos).

While wonderful as a meringue, aquafaba (liquid from a can of chickpeas) as an egg substitute for waffles is sadly still a hard-sell texture-wise, so I used organic eggs to make dairy-free waffles with maple syrup.

Since I cannot replicate the deliciousness after I first had it at Vegfest BGC 2018, I ordered the super yummy vegan spaghetti and assorted vegan empanadas (Original, Chick’N’ and Peach Mango) from Vutcher plant-based carinderia (facebook.com/vutcherph/).

Their spaghetti is Pinoy-style, sweet and chunky, topped with almond cheese, reminiscent of kiddie or fast-food spaghetti from our omni days.

I tried to order from them twice before, but they haven’t been able to accommodate my orders, so I was very happy that my third try was a charm. They sent the food promptly via Lalamove.

Vutcher even sent over a generous stack of comic books and stickers from Peta (People for the Ethical Treatment of Animals) when they learned I was ordering their food for my daughter’s birthday.

Our guests liked the food and were pleasantly surprised to learn it was plant-based. They raved over the spaghetti, most especially, as they said they couldn’t tell it was vegan.

There is lots to explore in the world of plant-based cooking and entertaining; it’s exciting, delicious and best of all, kind.—CONTRIBUTED