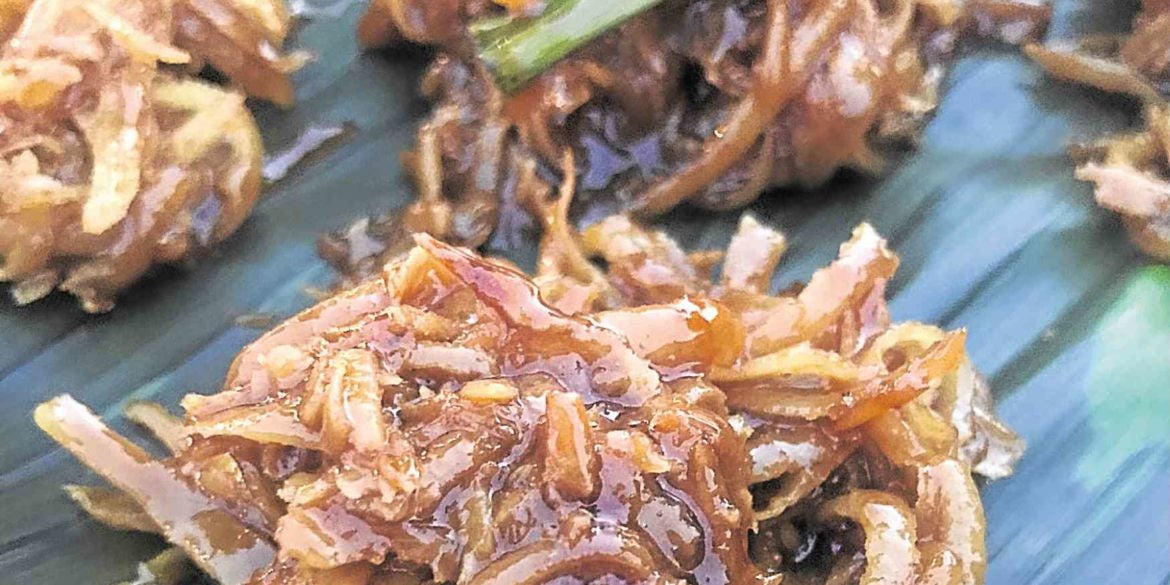 Whenever my dear friend Rica Dakudao-Buenaflor talked about the food she has discovered and has grown to love in Bicol (she hails from Davao but married a Bicolano), I would always go into a dreamy state then proceed to salivate.

She has teased me one too many times that I finally asked her to organize a tour so I could sample the dishes she has long been bragging about.

Last month, we went to the southern tip of Luzon for a three-province journey that introduced us to proud purveyors, homegrown produce, local dishes, and passionate cooks. It was an experience worth telling other people about.

Straight from the airport, we drove to Que Pasa, a Spanish restaurant conveniently located across the Naga Metropolitan Cathedral.

They have two menus to choose from—traditional tapas like croquettes, calamares, gambas and a variety of paellas, ranging from Valenciana to Negra; and local fare, a veritable rundown of Bicolano specialties that have been thoroughly researched by chef Jet Sumayao.

Armed with 15 years of cooking experience that includes stints at Chele Gonzalez’s Vask Gallery, and Gaggan in Bangkok, Sumayao has a resumé that could get him in Asia’s finest restaurants, yet he chose to return to his home province.

Lunch was an eye-opener as my gastronomic vocabulary grew beyond Bicol Express and laing.

The chef introduced us to sinanglay, fish and vegetables wrapped in pechay leaves and gently poached in coconut milk. His version had the tilapia cooked three ways: grilled, fried and poached.

There was also tinuktok, which was like pinangat meatballs in fish broth. It’s a dish that’s native to the town of Baao. And anko, akin to mochi filled with peanuts and coco jam.

Then we drove to J. Emmanuel Pastries to learn more about pili.

In 1997, Joseph and Maria Lydia Lomibao had a starting capital of P500 and a small oven. Since Bicol is the top producer of pili nuts owing to the volcanic soil, the couple decided to sell pili tarts.

She has pasta versions of Bicol Express and laing, but what people really go there for is the banana blossom burger, which has a crispy ukoy-like patty. Due to frequent typhoons that knock down banana trees, the locals are forced to use its different parts, and one of the clever results is this burger made of banana heart.

The day ended with a visit to the Buenaflor’s Little Pecuaria Farm where we enjoyed a cooking demo and a special meal. Nanay Edna, 60, taught us how to prepare four dishes including laing and bukayo, as we enjoyed our cold Ibalon craft beer. We enjoyed the dishes at a picnic dinner along with a big pan of laing paella prepared by the chefs of Que Pasa.

Before leaving the city, we woke up early and paid the Naga Public Market a visit.

Built in the 1960s, it was given a major makeover in 2010 to turn it into a people’s mall and accommodate close to 2,000 small businesses.

Unlike the mall, you can haggle at the market and get good bargains from your suki. There are tubes of dinalian, which is the sediment at the bottom of a fish sauce barrel; pansit noodles of varying shapes and sizes; different kinds of fresh taro leaves; and an assortment of dried fish, including what the locals call “new look,” owing to its shiny black appearance reminiscent of pomade.

Breakfast came in the form of kinalas, which many call the Bicolano ramen. It’s a specialty that started in Barangay Dayangdang where tricycle drivers would boil cattle head for long hours and turn its tender meat and potent broth into a delicious noodle soup.

Mang Kok is among the popular brands in the area and it has been serving kinalas in their garage since 2015. Owners Arvin and Emi Salgado serve over 400 bowls a day.

They have a kinalas  special that comes with hard-boiled egg, chicharon and siomai. For an extra P40, you can even enjoy it with mata ng baka. You can also opt for the log-log, which has no meat.

In Ligao, on the way to Albay, we passed by a road that was lined with stalls selling three kinds of kakanin: puto sa bao, purple-colored rice cakes filled with sweetened coconut; sinapot, which is similar to maruya but lighter and thinner in fried batter; and biniribid, which is piniripit that takes on a different form.

After a 90-minute drive, we reached Sumlang Lake, which is the closest we got to the conical Mount Mayon. It made for the perfect backdrop to the cooking demo, where chef Ato Jr. of Socorro’s Lakeside Restaurant and Grill taught us five dishes that use taro leaves—pinangat, laing with kanduli wrapped in taro and cooked in coconut milk; inolukan, which is like pinangat but has young coconut meat and freshwater crabs in place of fish; a dried version of laing served with pork belly; palusag, a saucy laing where the coconut milk is cooked until the oil comes out; and sinu-wan, a soupy gabi dish without coconut milk.

Late lunch was served at Socorro’s where we got to try the dishes the chef demonstrated, as well as their best-selling crispy Bicol Express; tinutungan na manok, which is chicken adobo in burnt coconut milk; and for refreshments, halo-halo with coconut water as shaved ice and pili ice cream.

Next, we headed to Jasmine, Elkanville Boutique Hotel’s signature restaurant, where head chef Michael Macating turned to local flavors when interpreting comfort food. His spanakopita is stuffed with ginataang lubi-lubi, ravioli with pinangat, and the roast pork belly comes with a Bicol Express sauce.

On our last day, we headed to Pilar, Sorsogon, and took a boat to a tiny island close to the Kubkob Lighthouse where sea urchins abound. We enjoyed them with calamansi and vinegar. They came in different shapes and colors, but all had a lovely sweetish and briny taste.

We sailed further out to Panlatian Bay for a harvest of lato or sea grapes. We dunked them in vinegar with chopped onions and ate to our heart’s content. Nothing can compare to eating produce right from where they were sourced.

Siama Hotel by famed furniture designer Milo Naval hosted lunch for the group. Opened in 2013, the nature-inspired boutique hotel took us away from the city rush and into a private haven decorated with rich foliage, an inviting 25-meter swimming pool, and nooks that invite guests to bask in the province’s laid-back lifestyle.

After a quick rest, we moved to Naval’s other property, Siama Surf, which evokes the same simple, elegant design fit for a beach setting. There were cottages and daybeds that appealed to our weary bodies, but those had to wait as chef Meann Guardian first taught us how to prepare two local specialties—kinunot (flaked fish in coconut milk) and sigarilyas with baluko (winged beans and scallops).

The food tour was capped with a visit to Lola Sayong’s Eco-Surf Camp where we met cousins Emil Eugenio and Nico Mercader, both of whom traded their jobs as cooks in Manila to become surfers-slash-resto operators in Sorsogon. They manage the “kitchen” in the expansive lot previously owned by Lola Sayong (her kids took over when she died early this year). It used to be just a paluto-style eatery.

The duo has built a two-story restaurant, serving a menu dotted with delicious dishes such as the Chicken Sheet, tender fried chicken with a sweet coconut milk sauce; Smoked Fish Out of Hell, tinapa with gata and served with nacho chips; and Pork Bar Real, fried pork with salted egg. The food is savory and satisfying.

I have always known Bicol to have great food, but I didn’t expect them to be that varied. In just a few days, I got schooled in the abundant and full-flavored cuisine of the region. —CONTRIBUTED