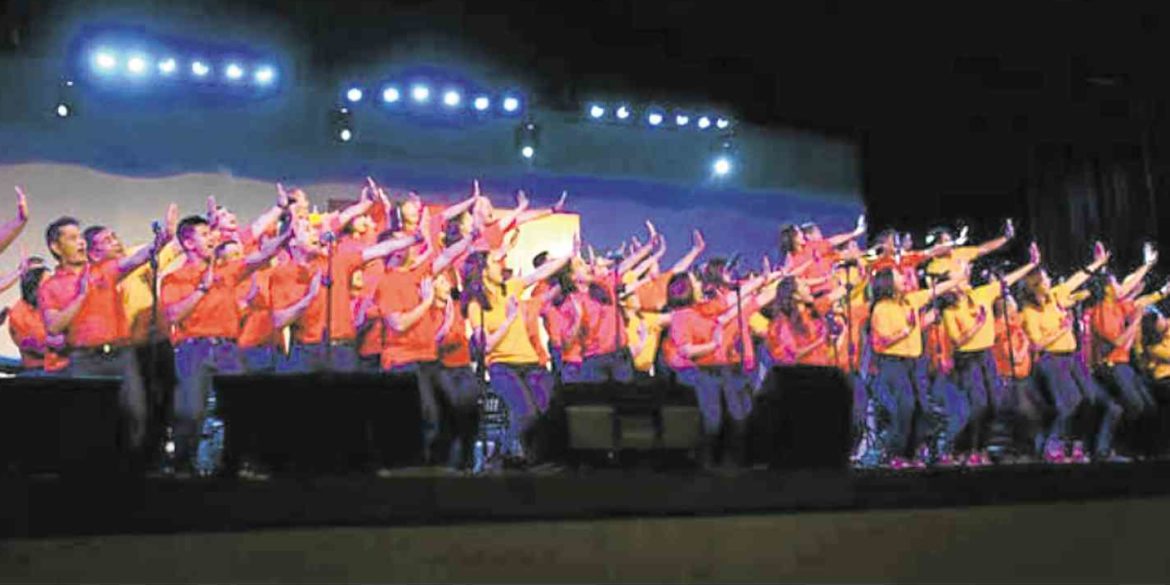 The old Catholic saying, “To sing is to pray twice,” is best experienced during Sunday Mass in Philippine churches, where the faithful take their liturgical songs seriously.

But probably not everyone knows that a good number of these songs—”Ama Namin,” “Papuri sa Diyos,” “Luwalhati,” “Santo,” “Kordero ng Diyos,” “Pananagutan,” “Magnificat,” to name a few—were written by Fr. Eduardo Hontiveros, SJ. Fondly called Fr. Honti, the Jesuit priest (who died at age 85 in 2008) is recognized as the “Father of Filipino Liturgical Music.”

In 1967, when the Second Vatican Council decided that new liturgical music may be written to suit the needs of a particular country, Hontiveros was among the first to respond to the call.

Hontiveros, along with a roster of Jesuit priests including another prominent composer of sacred music, Fr. Manoling Francisco, will be given a musical tribute by the Jesuit Communications Foundation (JesCom) and the Jesuit Music Ministry in a concert, “Ginintuan: 50 Years of Jesuit Music,” on July 13 at the Henry Lee Irwin Theater, Ateneo de Manila University in Quezon City.

JesCom is the media arm of the Philippine Province of the Society of Jesus, the religious congregation that runs the Ateneo and other Jesuit schools in the country.

Originally formed in New Orleans in 1968 as the Jesuits Engaged in Social Communications, JesCom in the Philippines was organized in 1969 by Fr. James Reuter, SJ, Fr. Paul Brunner and Nim Gonzales.

From doing live radio soap operas, seminars and conferences on communications, JesCom is now a full-fledged production house with programs on TV and radio. It has produced a film, “Ignacio de Loyola,” and records by musicians like Noel Cabangon, and vocal groups like Bukas Palad.

Fr. Nono Alfonso, SJ, JesCom executive director, says that there have been lots of changes in Filipino liturgical music since the time of Fr. Honti. “Many musicians have composed songs in Bisaya, Bikolano, Ilokano, etc.,” he tells the Inquirer. “The youth are active in the liturgy. Musicians have also started composing Psalms that can be sung at Mass. This was a craze for some time. There are also experiments … with the musical accompaniment. Before, there was only the church organ, now many instruments are being added to enliven the music.”

But improvisation, Alfonso says, can be done “only to a certain extent, because the Church has strict guidelines. The liturgy is also the official prayer of the Church. Liturgical songs must correspond to the parts of the Mass where they are intended to be sung. If it’s for the penitentiary rite, for example, then the song should really express regret or deep sorrow. Also, the liturgy follows seasons—Christmas, Advent, Lent, Easter and Ordinary Time. They represent specific moods and the music, therefore, should capture these moods.”

Alfonso points out that the songs Hontiveros composed are  “sung easily and are memorable because he intended them that way. It was said that when teaching a new song to his choirs in Barangka, Marikina, in the 1970s, if the choirs find some difficulty in his compositions, he will change them, rather than impose on the choirs.”

Hontiveros was not only a pioneer; what he did was revolutionary, Alfonso says. “Before Vatican II, the Mass was said and sung in Latin. But with the Filipino liturgy and the Filipino songs of Fr. Hontiveros, the congregation could now address God in their own language and express to him the desires of their heart and soul.”

Alfonso explains that JesCom partnered with the likes of Cabangon and Toto Sorioso “because we wanted to reach out to the people who like their music. The mission of our music ministry is to evangelize people through music. As Ignatius, our founder saint, would say, one can find God in all things even in the secular world.”

As JesCom celebrates its 5oth anniversary, Alfonso says that “its greatest achievement is still Hontiveros’ work and legacy—Filipino liturgical songs that started a trend and influenced the life and the growth of the Philippine Church. It is said that all over the world, where there are Filipinos gathering for Mass or any prayer service, you will hear Jesuit music being sung, evoking community spirit and providing spiritual solace from the loneliness of being away from the Philippines. JesCom is glad to be instrumental in such experiences.”

As for what the future holds for JesCom, Alfonso admits that the challenge of digital platforms presents problems. “Not only has Filipino music become cheap, it has also been compromised by piracy. Our music ministry is, indeed, a ministry, requiring not much. But we still have to pay electric bills for our recording studio, and our sound engineers and musicians have to earn their keep. We are managing this difficult transition into the new musical landscape. But with God’s hand, we hope to manage to sing forever.”