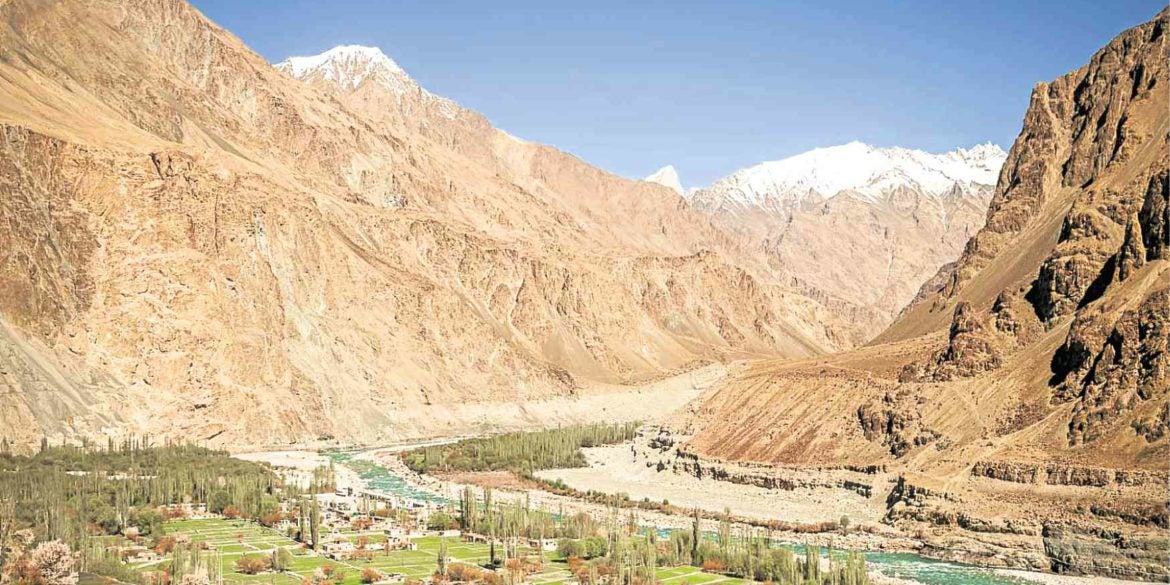 Turtuk Village, as photographed from the temple

The jagged, snow-capped mountains and arid hills, the towering poplar trees and flat-roofed houses were perfect backdrops for both sitting still and long, quiet walks

With barely two hours of sleep, I boarded a plane in Delhi and woke up with rolling trolleys more than an hour into my flight to Leh.

I looked out the window to see endless snow-covered peaks of the great Himalayas. It was a place I have long dreamed of seeing, ever since I read the article by travel writer Pico Iyer.

Leh is the largest town in Ladakh, the “land of high passes.” It is India’s highest-altitude plateau, located in the state of Jammu and Kashmir. It once connected India to the Silk Road.

I arrived in Ladakh just as the whole city was preparing for the tourist season, which starts in the spring. In Rover’s Den, a hostel where I booked my first few nights, I was among its first guests.

At this time of the year, Ladakh is relatively quiet. It is the Ladakh I was hoping to meet—untouristy, raw, and probably the Ladakh as it was years ago. The jagged, snowcapped mountains and arid hills, the towering poplar trees, and the whitewashed, flat-roofed houses were perfect backdrops for both sitting still and long, quiet walks.

But Ladakh at this time is cold—piercing cold.

On the way to the Leh Central Market, where I would look for a tour agency, snow fell. It was my first snow experience and it was awesome.

But the joy of the first snow quickly turned to concern about how I would survive the cold weather, which makes breathing laborious. There was also the altitude.

Yet, I wanted to experience walking on that snowfield and throwing my first snowball. Actually, standing there at 18,350 feet above sea level was already quite an accomplishment for me.

This is a dream 10 years in the making. And, literally, on Khardung La Pass is the closest I have ever gotten to heaven’s gate.

I had recent reminders of how fleeting life is, which prompted me to book my tickets to India. A few months ago, I was told that I needed to have surgery, exactly five years after my mountain climbing accident.

Since it was not a life-threatening illness, I decided to put the procedure on hold. The process caused me to feel dread, fear and anxiety. On good days, I felt hopeful, but those were rare. Additional pressure from work would also not let up. So, I decided to pluck myself from that reality for a while.

Fortunately, my friend Ayan was in India traveling and Ladakh was on his itinerary. He encouraged me to join him, knowing it was my dream to go to Ladakh.

India has been generous in sharing its riches to me. It was not really the India I’d seen in books and social media posts. Some of the stories I’d heard scared me. The India I experienced is something that bestows gifts like my many firsts. It heard my wishes and granted them all.

One of them was my first camel ride. In Hundar, which is part of the high-altitude cold desert of Nubra Valley, I got to ride Bactrian camels, which once enabled the travel of caravans on the Silk Road.

The ride on these shaggy creatures with double humps and a coat of thick hair was very calming. A young man from Kargil quietly led our camels through the sand dunes. He may have felt our need for solitude. He only broke the silence midway into our 15-minute ride when he asked if we wanted photos.

Nubra Valley is one of the popular destinations for travelers to Ladakh. There, I also visited the Diskit Monastery, the oldest and largest Buddhist monastery in the Nubra Valley. The monastery, laid out on a hillside, overlooks the Shyok River and the desert.

Another popular destination is Pangong Lake, popularized in the movie “Three Idiots.”

I was also charmed by what I read about a village about two hours from Nubra Valley which our friends from Rover’s Den recommended. Ayan and I rented our own vehicle to go to Turtuk Village.

Turtuk is the penultimate village open to foreigners. Just a few miles away lies the border with Pakistan.

The first encounter was quite dreamlike. We crossed a rickety, wooden hanging bridge to enter the village and were greeted on the other side by women drawing their donkeys.

It was a pleasant 10-minute walk to our accommodation, Kharmang Guest House, situated in front of a field, with the mountain range in the background. On the footpath toward our room, apricot trees and cherry blossoms bloomed.

Early the next morning, I followed a path that traversed fields, stone houses and a few more guest houses. Turtuk was preparing for the coming of tourists. The pathway eventually opened up and I found myself in one of its attractions, a 16th-century polo ground. As I stood to admire the scenery, accentuated by more blooming trees, I followed an old woman until I realized I was on my way to a temple located up on a hill.

There I met a police officer who explained to me that most of the villagers are Muslims and there are very few Buddhists in the village, mostly peacekeepers like him.

Turtuk was under Pakistan’s control until 1971, when Baltistan was partitioned between India and Pakistan.

He pointed out, beyond the fluttering prayer flags, the mountains that separate India and Pakistan, the Karakoram mountain range, home to K2, the world’s second-tallest peak. Below us, the Shyok River flowed, and its water is one of the most breathtaking blues I have ever seen.

On the journey back to Leh from Turtuk, I tried to stay awake to watch the change of scenery. I went through boulder fields, through barren lands and up snow-covered mountains.

My travel companion Dennis said that the word Himalaya could be a portmanteau of himala or miracle, and laya or freedom. I realized that’s exactly what Himalayas meant to me at that moment, at a significant crossroad in my life.

I was finally able to breathe.

Up in the courtyard of Leh Palace, I shared a bench with another foreigner as we stared at the great mountain range.

There we were, both stunned in silence, doing our best to absorb the tranquility and enjoying the halcyon atmosphere.

I spent most of my last few days in Leh with Ayan in the quiet of a hotel room that had a sweeping view of the mountains.

We had slow breakfasts at the hotel and tranquil afternoons spent on our balcony observing the mountains’ change of colors at sunset. We walked around town, spun more prayer wheels, and watched more Ladakhi faces light up as we greeted them with julleys, the local greeting.

On our last night together, Ayan asked me if Ladakh was how I pictured it to be.

I could not answer because all I remembered from the first time I read Iyer’s articles were the emotions. It dawned on me that I was not as emotional and hormonal as I expected myself to be on this trip.

Ladakh had given me peace—and that was the heavenly feeling I sought on this journey. —CONTRIBUTED