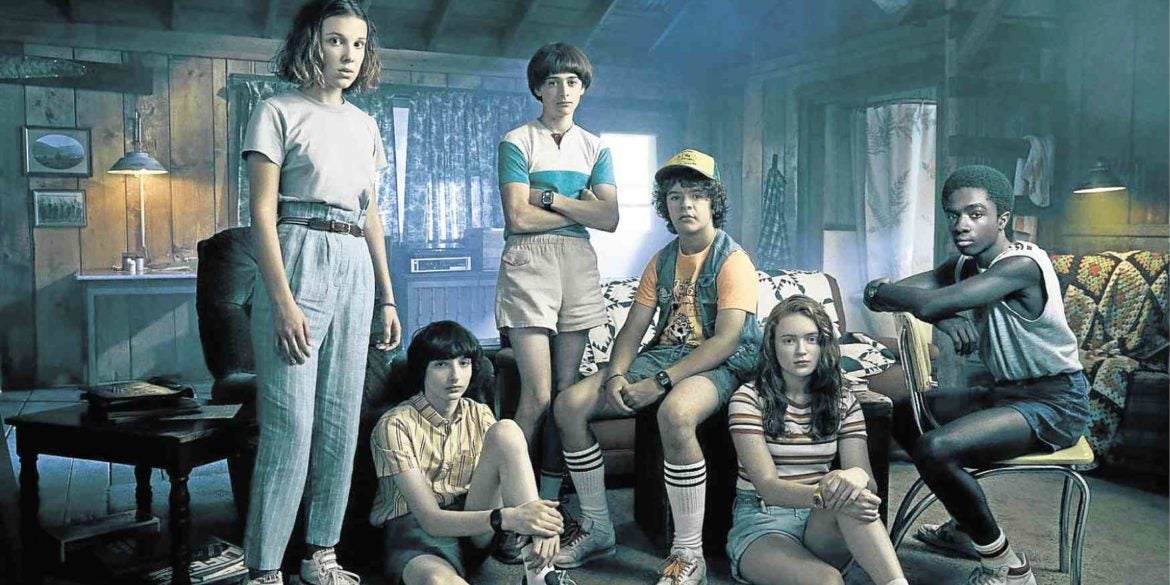 This new season has given us so many things to obsess over.—Photos courtesy of Netflix

Super things you need to know about ‘Stranger Things’ Season 3

What happens if you call Murray’s number, the 411 on Robin and Alexei, Dustin’s song, a ‘Queer Eye’ crossover and the dark history of that new mall

1. You can actually call Murray Bauman

You can actually call his number. He won’t pick up but his machine will. And his lengthy prerecorded greeting is worth a listen. Here’s a snippet: “Mom, if this is you, please hang up and call me between the hours of 5 and 6 p.m. as previously discussed, okay? If this is Joyce, Joyce, thank you for calling, I have been trying to reach you. I have an update. It’s about, well, it’s probably best if we speak in person. It’s not good or bad, but it’s something.”

2. This Robin is no sidekick

We love our ice cream- slinging, code-solving Scoops Ahoy foursome: Dustin (Gaten Matarazzo), Erica (Priah Ferguson), Steve (Joe Keery) and Robin (Maya Hawke), the new girl who has stolen the hearts of fans with her smarts, spunk, sense of humor and sailor costume (it’s available on the Party City website, BTW). Their chemistry is one of the best things about season 3. Maya is a great addition to the show. We look forward to seeing more of her. And here’s an interesting tidbit: She has Hollywood in her DNA. Her parents are Uma Thurman and Ethan Hawke.

Fans have also become obsessed with Alexei, the Slurpee-slurping Russian scientist played by Alec Utgoff. His number of Instagram followers shot up from just 400 to over 208,000 in a matter of days. The British-Ukranian actor, previously seen in “San Andreas” and “Jack Ryan: Shadow Recruit,” has gotten so much love on the Internet that he has posted, “I tried answering as many people as I could… As this is quite simply impossible with my responsibilities at home, I’d like to thank you for all your kind energy.” We’d like to share a giant cherry Slurpee with him. Maybe with a splash of Smirnoff.

If you enjoyed Dustin’s rendition of the “Never Ending Story” theme song, we have good news for you. You can listen to it as much as you want on Spotify. The Gaten Matarazzo-Gabriella Pizzolo duet is the last track on the “Stranger Things” 3 soundtrack. And if you love the original score of “Stranger Things,” follow composers Kyle Dixon and Michael Stein—you can stream their work on the show and make it the background music to your life.

4. Murder in the mall

To create the Starcourt Mall, the production team of “Stranger Things” used Gwinnett Place Mall, a derelict mall in Duluth Georgia, as its canvas. It was perfect for its architecture and the fact that it was built in the ’80s. The team gutted it and reconstructed the mall of teenage Hawkins’ dreams, painstakingly recreating how stores like The Gap, Claire’s and Orange Julius actually looked like in 1985. Emmy Award-winning production designer Chris Trujillo said, “We were able to lavish so much love and attention to detail on Starcourt Mall. It’s a big, beautiful set, but as is often the case in Hawkins, there is almost certainly something insidious lurking just behind the neon facade.”

Gwinnett Place Mall is no stranger to darkness. In December 2017, the decomposing body of 19-year- old student Silling Man was found by a maintenance worker in the largely abandoned mall’s food court. Police later discovered that she had been murdered by her boyfriend.

Earlier this year, it was announced that a sports developer has plans of turning the mall into a cricket stadium.

This is the Netflix crossover we never knew we needed.

Remember William Mahnken from season 2 episode 2 of “Queer Eye?” The guy who proposed to girlfriend Shannan with an outdoor movie? He appears in “Stranger Things’” first episode as one of the jerks working at Hawkins Post (you can’t miss that ’80s moustache). You can also spot him and now-wife Shannan at the bar during Hopper’s restaurant scene in episode 2.