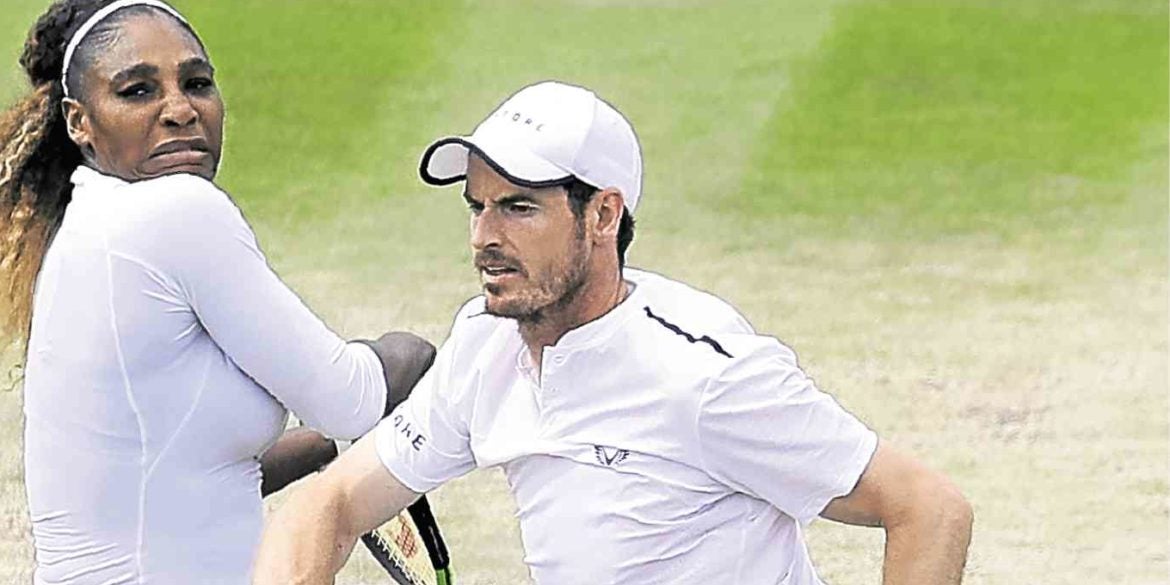 Serena Williams and Andy Murray on the famed grass court: It was great fun to see their rapport and mutual admiration.

The Andy Murray-Serena Williams team-up at Wimbledon: Double the fun

Singles superstars playing mixed doubles at the premier tennis tournament are always exciting to watch—and this year, Team Murrena was no exception

We’re in the quarterfinals, and there is no limit to the fresh green grass tennis stories for us to gasp, gape, gawk and gab over.

The bolt of light that is 15-year-old Coco Gauff besting no less than Venus Williams, almost a quarter of a century her senior. The latter might well have been looking over the net at another version of herself in another life, all lean, lanky limbs and flipping hair.

And how about the monster match between Nick Kyrgios and Rafael Nadal, with the former’s disrespectful serves, and the out-and-out drive targeting Nadal’s body? I was a Kyrgios fan early on—but seeing some bad behavior toward kids who had asked for a selfie with him at elite-level International Premier Tennis League tournaments here in Singapore turned me off permanently. “Yes,” he said brusquely, but sat staring stonily away from their camera phones. “Take the picture”—much to the boy’s visible disappointment.

I was sad to see Ash Barty bowed by Alison Riske, being the world’s no. 1 for the proverbial New York minute. And of course, I take any opportunity to cheer an Asian woman—so I was sad to see Taiwanese Hsieh Su-wei and China’s Zhang Shuai leave the grass. Both these ladies dispatched formidable opponents, with Zhang sending two Carolines home, Garcia and Slam-winner Wozniacki, and Hsieh finishing off Jelena Ostapenko and Kirsten Flipkens, themselves no slouches.

But perhaps the tennis tale I’m most taken by is the choice by two singles champions, Andy Murray and Serena Williams, to team up and be Team Murrena in mixed doubles.

Doubles is seen as a step down from singles, unfortunately, even though doubles aficionados could well argue that the dynamics are much different, with more moving parts to think about.

It’s a game that pros segue into, when the years of the single circuit become too much of a burden on the body. Consider Martina Navratilova and John McEnroe who both have the most titles ever won—singles and doubles—because they chose to do the latter. But think of Martina Hingis, who retired early from singles, opting to play doubles because she preferred the dynamic. Indeed, no less than Roger Federer has spoken about the beauty of doubles, and how much he himself loves the game.

Now, both Serena and Murray are no strangers to doubles, each having played with their siblings. But when Murray intimated impending retirement early this year due to hip surgeries, we did not know that doubles might still be in the cards for him. Fast-forward to Wimbledon, and the word was out that the Scotsman was searching for a mixed doubles partner.

Reports indicated he had tapped both Ash Barty and Christina Mladenovic, before going to Serena. Mladenovic, currently Dominic Thiem’s main squeeze, admitted saying no to Andy was the most difficult thing she had done.

Despite being third choice, Serena won out. Murray clearly wanted to test out his hip, and in doubles, there would only be half the ground to cover. Meanwhile, Serena, for her part, would also get more “practice” on the unpredictable Wimbledon grass. Regardless of their reasons, Wimbledon won and so did we, the audience, even though the team did not progress beyond the third round.

The game is tremendous fun to watch. And mixed, of course, draws in the exciting male-female dynamic that only increases the elation. It was wonderful to see the usually grim Murray smile on court at his partner. So they did not take the title. So they did not even come close. So what? It didn’t change how much fun it was to watch these two grand slam champions team up and come to the net together to put a ball or two away.

But it might occur to many to ask why they lost. Weren’t they a dream team? As someone who started out playing doubles and has now discovered the thrill of singles, I have a couple of theories to posit.

First time playing with a new partner is always a matter of adjustment, and to my mind, this indeed might have come into play in this particular partnership. Being predominantly singles players, Murray and Williams are both accustomed to getting the job done single-handedly, as it were.

Even Jamie Murray, the acknowledged “doubles player” of the Murray brothers, had apparently given his big bro pro a few pointers on the game, admitting that some partnerships do take time and practice to bear fruit.

Serena and Venus have won doubles titles together, but I’d guess that it’s still easier for siblings to get a read on each other. While Andy was fresh from a Fever-Tree Championship doubles triumph with Feliciano Lopez, his Wimbledon partnership with Pierre-Hugues Herbert fared even less well than with Williams, as they crashed out in the second round.

My other thought? Team Murrena was largely playing two-back, with both of them standing closer to the baseline, instead of the more conventional one up and one back position or even the trickier I-formation, where the two players stand in the middle to form the letter I. This position tends to open up all sorts of angles for the opponents on the doubles court. My preference is to avoid that altogether when I’m playing doubles, because I feel it communicates weakness.

Still, while I won’t say they weren’t going for it, I will say that taking the title would have been a bonus, and not something they expected to do. Nevertheless, it was great fun to see their rapport and mutual admiration. It was a pleasure to witness their male-female champion dynamic, no doubt exhilarating for any tennis fan enjoying their strawberries and cream.

It did give me thoughts about how much more these slams can be with single players taking the doubles route. It also makes me hopeful for a whole slew of other exciting partnerships in the future.

As I look forward to the Fed-Nadal semifinals tomorrow (I think Nadal will take it, even though I want Roger, too), and to Simona Halep maybe beating Serena in the final, I can’t help but wish that Elina Svitolena and her current main squeeze, my own fave, Gael Monfils, decide to partner up on court, too. Why on earth would they not double their fun? —CONTRIBUTED