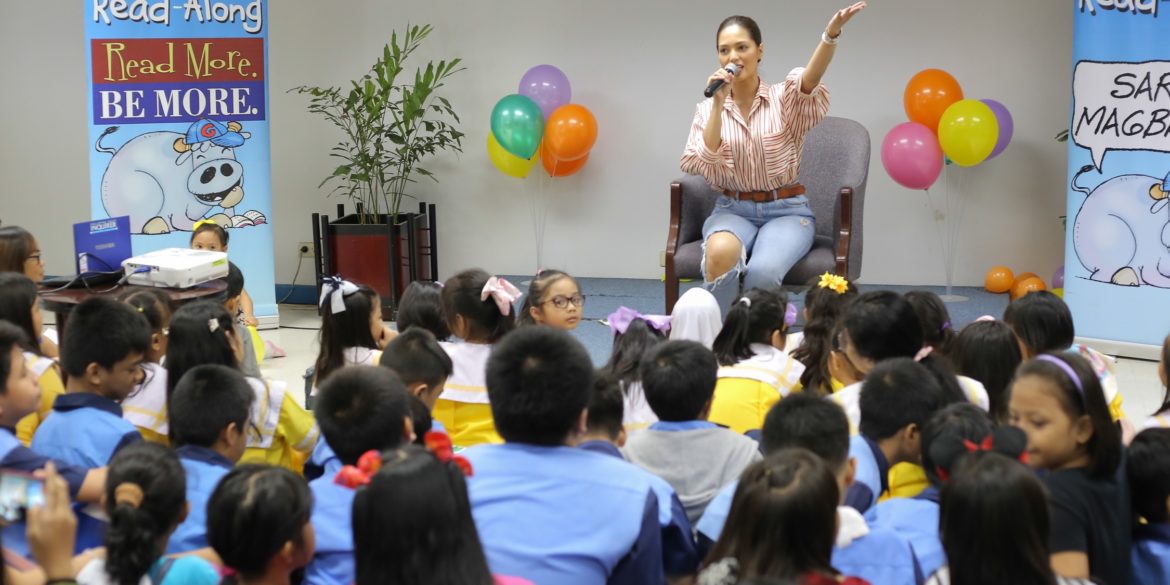 TV host Patricia Tumulak engages kids as she reads "The Bitter Gourd in Peepo's Plate," which tells of a young boy who refuses to eat ampalaya. (Photo by EARVIN PERIAS / Contributor)

MANILA, Philippines — Some 100 kids learned about the health benefits, environmental impact and the ethics of eating vegetables and eating meat-free meals from guest readers nutritionist-dietitian Ann Abacan and actress and TV host Patricia Tumulak at the Inquirer Read-Along session at the Philippine Daily Inquirer office in Makati on Saturday.

Tumulak read “Ang Ampalaya sa Pinggan ni Peepo” (“The Bitter Gourd on Peepo’s Plate”), which was written by Joachim Antonio and illustrated by Pergylene Acuña. The story tells of a young boy who refuses to eat ampalaya and how he learned to eat the vegetable for its nutritional value.

A former beauty queen, Tumulak has tried to practice a healthy lifestyle by going on a yearly detox, going on a vegan diet for three days. She also did juicing, using fresh fruits and vegetables.

“Growing up, I was used to eating whatever I want. When I was introduced to healthy food, I felt lighter and rejuvenated. That’s why it’s important for kids to learn to eat vegetables and fruits at an early age so they would get used to their unique flavors like bitterness,” Tumulak said.

Long-time Inquirer Read-Along partner Abacan read “Paano Kumain ng Kulay?”, which was written by Mabi David and illustrated by Yas Doctor. The poem introduces kids to vegetables and fruits by color association. Each rainbow color is assigned a specific vegetable or fruit, whose flavors are also identified.

Abacan, the principal of Sophia School in Meycauayan in Bulacan, is an advocate of going meatless and keeping a healthy plant-based diet.

In 2011, Sophia School started its “Meatless Monday,” which is patterned after a global movement that started in New York in 2003.

Mondays in the canteen of Sophia School means having meat-free meals, serving only vegetables, vegemeat and other plant-based sources for the students, faculty, and staff. Meals include veggie menudo, congee with tofu, boiled root crops, and other meat substitutes, such as mycoprotein, which is made from mushrooms.

Mycoprotein is found in products of Quorn, a leading meat replacement food manufacturer based in the United Kingdom.