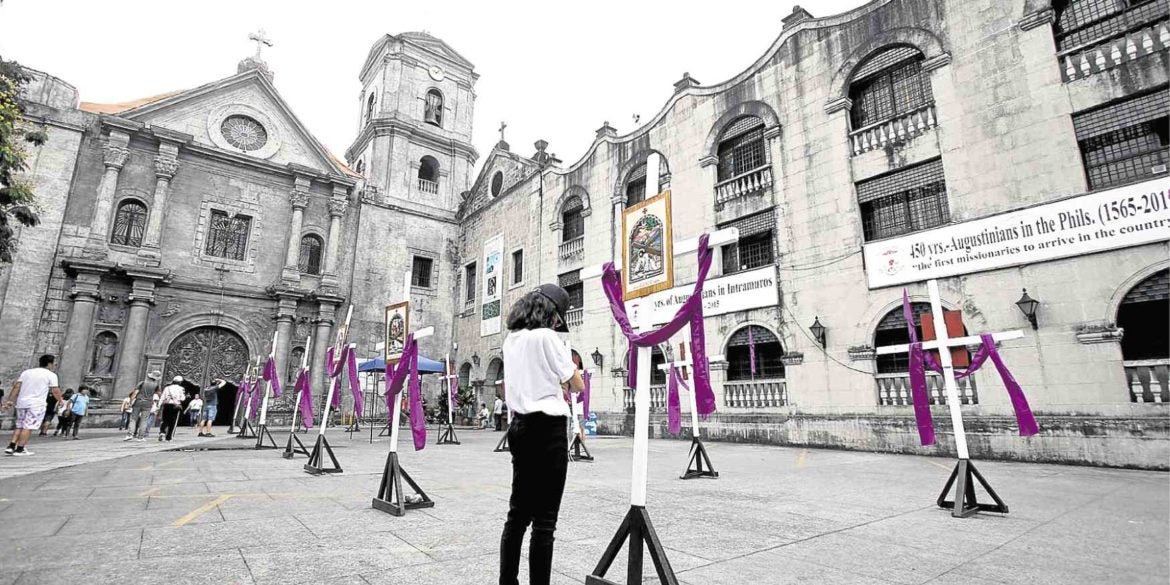 Lenten penitents doing the Stations of the Cross on the plaza of San Agustin Church in Intramuros on Black Saturday on March 31. —RICHARD A. REYES

Public Works and Highways  Secretary Mark Villar has admitted that the construction of the controversial Binondo-Intramuros Bridge is ongoing, but Unesco National Commission of the Philippines (Unacom) has allayed fears of the possible delisting of the Baroque Churches of the Philippines from the World Heritage List.

“Unacom has been in close coordination with relevant agencies and entities regarding the construction of the Binondo-Intramuros Bridge and its impact on the buffer zone of San Agustin Church,” said Unacom Secretary General Lila Ramos Shahani in an online interview with the Inquirer, following the recent 43rd session of the World Heritage Committee (WHC) in Baku, Azerbaijan, where the Philippine Baroque Churches were discussed.

Heritage advocates and the International Council on Monuments and Sites (Icomos) Philippines, an advisory body to United Nations Educational, Cultural and Scientific Organization (Unesco), have criticized the bridge which they say would  affect the buffer zone of San Agustin Church in Intramuros and lead to the delisting not only of the the oldest church in the country but also to the three other Unesco World Heritage listed Baroque Churches of Miag-ao in Iloilo, Vigan in Ilocos Sur and Paoay in Ilocos Norte.

The buffer zone is a requirement of any Unesco World Heritage listed cultural property.

Shahani said it was important to note that Unesco and WHC had not “issued any statement on the possible danger listing, much less delisting, of the Baroque Churches of the Philippines.”

“This must be remembered, despite many sensationalistic claims that have been made in the media,” she said.

Shahani explained that Unacom’s role was to facilitate requests on the site in question between Unesco and the site manager, the National Commission for Culture and the Arts (NCCA).

When asked about Icomos Philippines’ recommendation to convert the project into a pedestrian-only bridge, she said the possibility was “low.” She indicated doing away with the vehicular bridge was not possible (“much less scrapped”).

She said Unacom was waiting for the result of the archaeological and heritage impact assessments, “along with major design changes” by the Department of Public Works and Highways.

Shahani said Unacom was in “close coordination” with cultural agencies such as the NCCA, the National Museum and the Intramuros Administration (IA). “We hope to provide sufficient information to the [WHC] within the year so that they can make a well-informed decision and provide assistance to us, if necessary.”

In its recent session in Azerbaijan, WHC noted that the state party (the Philippine government through NCCA) reported to them that the construction of the bridge was halted pending the outcome of the heritage and archaeological assessments.

But in a Philippine News Agency report on July 3, Villar had said  that the completion rate of the bridge was “10 per cent” and it would be finished in 2021.

WHC said it was commending the state party on the measures done, including the IA’s  conservation management plan.

But WHC lamented that a decision had been made to construct the bridge even before impact assessments were made:

“It is regrettable that a decision to construct the Binondo-Intramuros Bridge was made and works commenced prior to the assessment of potential impacts of the project, not only on the outstanding universal value (OUV) of the property but also on nearby heritage structures.”

WHC said it “also encourages the state party to regularly monitor all the component parts of the property, and also requests that it inform the World Heritage Centre of any new development project or major intervention that may have an impact on the OUV of the property before any decision is taken that would be difficult to reverse.”

WHC also asked for the updated state of conservation (SOC) report to be submitted in December 2020. WHC will discuss the SOC during its convention in 2021, ironically the 500th year of Christianity in the Philippines.

Shahani meanwhile assured the public that as a signatory to the 1972 World Heritage Convention, the Philippines was committed to the protection and preservation of World Heritage sites.

“It should [just] be noted that there are many heterogeneous voices in government, some of whom are primarily focused on development, while others are more committed to protecting our heritage,” she said.

She added that the stakeholders should all be taken into account and emphasized that nobody would want the Baroque Churches of the Philippines placed in the World Heritage danger list.

“It is just that consensus takes time,” she said. —CONTRIBUTED