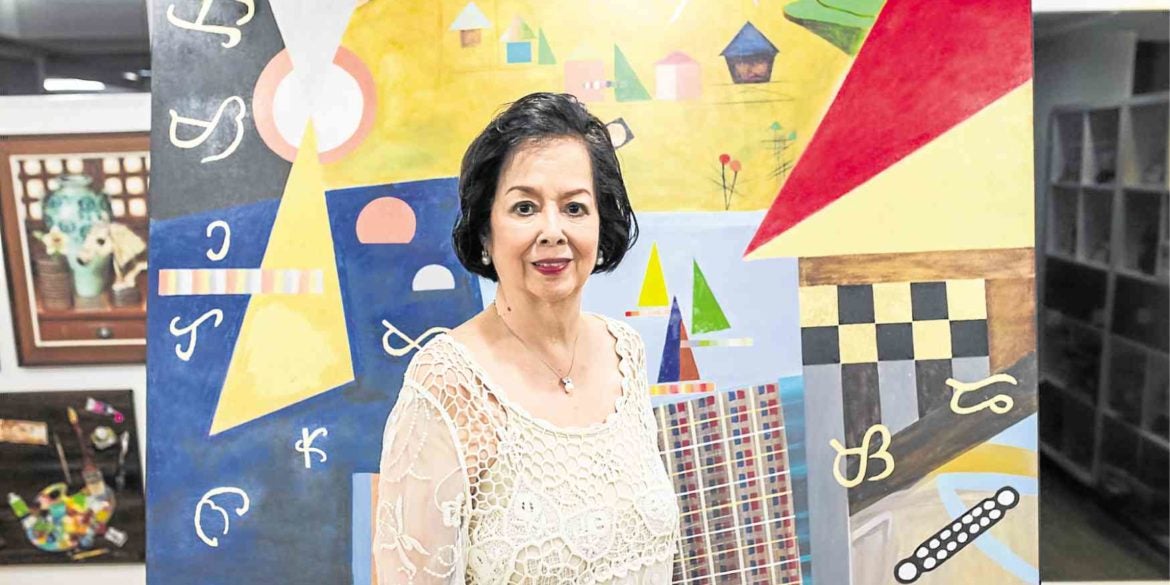 The artist with a large canvas inspired by Wassily Kandinsky

‘It gives me joy,’ says the late-blooming painter, whose first solo show will benefit a home for the elderly

I never thought I could feel like this about anything anymore,” says Conchitina Sevilla Bernardo. “I started at 72, and I love it! It has become a passion.”

Most of us have to be dragged kicking and screaming into old age. But there’s something to be said for gratefully accepting the years, and believing, as the poet Robert Browning wrote, that “the best is yet to be, the last of life, for which the first was made.”

Bernardo’s late discovery of painting—a talent she never thought she had—was an unexpected blessing, one that came during a particularly low point in her life.

Four years ago, she started experiencing tachycardia—or abnormally rapid heartbeat. A visit to her cardiologist ended with a grim diagnosis: It was a potentially life-threatening condition.

“Before I knew it, I was undergoing surgery and getting a pacemaker,” she recalls.

“I’m a little bit dramatic: I thought that I was going to die, that this was the end of my life. My father had a pacemaker, but he lived until he was 80. That’s not too far from where I am right now. I got very, very low.”

All of a sudden, her life was curtailed. She couldn’t do her usual Pilates workout, or go to the gym to lift weights, or swim, or even go to Baguio because the high altitude was bad for her heart.

A friend introduced her to the Sunshine Place, a “senior recreation center” where the elderly members could participate in various activities: learn the tango, yoga, Zumba, flower arranging, among others.

She chose tai chi, a low-impact activity suitable for someone with a newly installed pacemaker.

It was while she was wandering around the center after a tai chi session that Bernardo stumbled upon painter Fidel Sarmiento’s art class for seniors.

She had a few misgivings at first. Long ago, she had been told by an art teacher that she had no talent.

Sarmiento, in contrast, was an encourager who believed anyone could be an artist, given the right training and motivation.

Under his mentoring, Bernardo soon began to thrive. She experimented with oil and acrylic paint, before settling on graphite as her medium of choice.

“Graphite is just crystallized carbon,” she says. “When subjected to a lot of pressure and heat, it becomes a diamond. I like to think it’s an analogy for my life.”

In fact, Sarmiento—who’s also president of the Art Association of the Philippines—thinks Bernardo is a diamond in the rough.

“She’s a quick learner,” he says in Tagalog. “It’s like she took a fine arts degree. And she doesn’t just paint, she thinks. Her paintings tell stories. It’s too bad, she should have started sooner.”

Be that as it may, Bernardo still goes to class at the Sunshine Place three times a week, working from 10 a.m.-6 p.m. On off days, she sketches at home.

“I do this because it gives me joy,” she says. “It keeps me going. It’s therapeutic, and it gives you a schedule which is important at this age.”

She’s still learning, she hastens to add. “My ideas are there, but I still need guidance in the execution.”

Bernardo will open her first solo exhibit on July 27.

It’s called “Gilded Graphite,” a reference to her favorite technique, which is to blend different grades of graphite on canvas with pigment and gold, silver or copper leaf. It’s a painstaking, tedious process that requires a lot of time and patience, but the results are well worth the effort, says Bernardo.

“My art is orderly because I was trained to always make things look nice,” she notes. “It might seem superficial to others, but I cannot paint a scene where someone’s in anguish, where there’s clutter and disarray. I paint scenes that are very much the way I was taught to live.”

For her subject matter, she has focused on endangered animals, specially Philippine birds.

“I grew up in a house in Manila where there were fireflies. We had a mango tree and it was full of fireflies at night. We had a pond where tadpoles would swim. Most of all, we had a lot of birds. You don’t see that anymore and I miss it. So I started painting them. I said to myself: I should paint endangered birds because soon they’ll be gone. It gives me a sense of purpose.”

Apart from painting birds, she also draws a lot of deer, which she feels is her “spirit animal.”

“I like the fawn, the little one,” she says. “It has a look of wonder, and it’s so fragile, so vulnerable. I think I’m that fawn.”

Proceeds from sales of the paintings will go to the San Lorenzo Ruiz Home for the Elderly. Run by the Little Sisters of the Poor, a religious order that originated in France, it takes in indigent old folks, many of them abandoned by their families and living on the streets, and provides for their physical and spiritual needs.

It’s an advocacy that Bernardo started supporting when she was president of the Makati Medical Center Foundation, and which has gotten closer to her heart as she grows older.

“It is hard to age,” she says. “It is excruciatingly harder if you are old, poor and suffering from dementia. These admirable sisters pick them up, bathe them, feed them, pray with them. They help them die in a dignified way, and bury them with Christian rites. I asked one of them, ‘Cleaning up a baby is not bad, but cleaning up an old person can be disgusting.’ She said, ‘Oh no! When I clean them, I know I am cleaning Jesus’ wounds.’ And she meant it.”

On one occasion, Bernardo brought her art class to the San Lorenzo Ruiz Home for an art collaboration. The elderly wards helped paint two large canvases, which the art students later finished. It was the first experience of making art for many of the elderly, and a testament to the healing powers of creative expression.

Despite what people might think of her worldly life—former ramp model for Pitoy Moreno and Ramon Valera, founder of the Karilagan Finishing School for young women, a short stint in local government, editor of a newspaper section on the high life, and wife of a high-profile diplomat—Bernardo says she has always had a spiritual bent.

“All my life I’ve been a seeker,” she says. “I have a stirring in me that aches to find a relationship with God. It’s always been there. Now that I’m old, it’s what holds me together.”

For the past 30 years or so, she’s practiced a form of meditative centering prayer. “You empty your mind, and when you’re in that zone and you’re very quiet, the healing process comes in. There’s a spiritual side to every human being.

“I explored Buddhism, I went to Tibet, I joined the Theosophical Society. But in the end, I was brought back to my roots. It really doesn’t matter what you call it, if you’re looking for something, it will find you. And I found it in my prayer groups, in my advocacies,  in relationships.”

And now she’s found it in art.

“Gilded Graphite,” an exhibit of paintings by Conchitina Sevilla Bernardo, will open July 27, 5 p.m., at the Frabelle