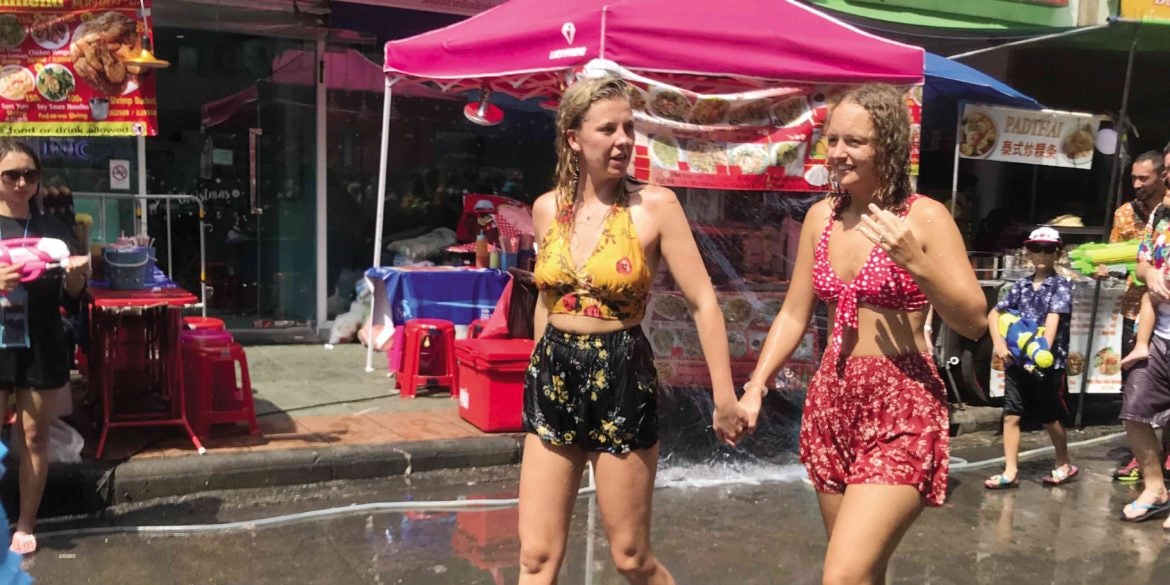 Songkran is Thailand’s New Year, a national party with the vibe of Coachella and the colors of a Pride parade. It’s amazing, if you don’t mind getting drenched.

Tourism Authority of Thailand invited us to the three-day Buddhist water festival that kicked off on April 13, and as our gay friends said, “Celebrating Songkran is on a beki’s bucket list.”

Our group went to Khao San Road for the street parade, and I came prepared in a tie-dye top fresh off morning shopping at Chatuchak weekend market, trekking sandals and a water blaster. “Ammunition” was sold in big drums at 10 baht per refill and 15 for iced water—which was a refreshing hit in the unforgiving Bangkok heat.

Goggles, dry bags and waterproof phone cases were also on sale, and trust us, you needed them.

There was no clear route, and casual walking led us to a water fight in the middle of a mixed-race sea of humanity. We were sprayed with water from high-pressure hoses held by enthusiastic expats from hostel balconies, and we fought back till our water guns were empty.

Squeezing through Khao San Road for hours was like battling it out in Manila’s MRT during rush hour—but with wet, shirtless guys around.

Botanical-print button-down shirts were the festival must-have. Vendors sold them for 150 baht to revelers who wanted to change into dry clothes.

Street food was most likely sprinkled with Songkran water, so we took a break instead in Kalanbatu Bar, a small, Poblacion-type reggae joint.

Over Chang and Leo beer, we watched the tireless crowd: girls in bikini tops, local teens, Filipinos bantering in Tagalog (“laban na laban sila!”), a Chinese “Flintstones” family, a white guy in sunflower drag and children carrying water-gun backpacks. (We felt guilty playing with water while the Philippines is having a drought. Sorry!)

The Puerto Rican bartender in dreadlocks offered water for our guns. “Take as much as you want, and you can  borrow this, too,” he said, handing over a power water gun. “Unli” water was a game changer.

Our Thai guide Ying, who miraculously remained dry, ushered us into Superflow City Beach Club for a “Wet and Wild Party.” The early dinner at the club’s Tom Yum Kung restaurant included fried sea bass, chili crab salad, and the popular hot-and-sour tom yum soup which we heartily ate while dripping in the club’s “no splash zone”—a ceasefire dining area.

It was a long day. And we hadn’t even started with the Bangkok nightlife yet.

Our first stop was Sway at the upscale Thonglor district. The hip-hop warehouse’s signature cocktail was The Sway—a blue mix of everything strong. We had to skip the nearby swanky clubs such as Snail, DND (Do Not Disturb), Safe House and Muse to catch the drag show at Silom.

And boy, they were beautiful. The queens at The Balcony  lip-synched flawlessly.

Thailand is a proud ally of the LGBTQIA+ movement, and we saw on Silom Road how lively inclusivity could be. Everyone was friendly—no bar brawls, just cheerful, happy energy from hot gay guys.

We were still on a Songkran high the next day as we toured IconSiam, the fancy mall along Chao Praya River, which had a “floating market” feature called Siam Sook.

Food items traditionally sold on boats could be had there—in air-conditioned comfort. (One must check out the theme washrooms with art and giant vases as sinks.)

There were regional pottery, weaves and crafts. I found “Thai perfume” in tiny bottles sold for only 15 baht each, so I asked for the tester and the charming man gladly opened a fresh bottle. On my wrist, it smelled like an earthy blend of sandalwood, bergamot and rose.

Affordable pasalubong  to hoard, I thought, till we went to Wat Po temple to pay respect to the iconic Reclining Buddha. I saw the same “Thai perfume” purchased and poured over the Buddha as an offering!

I still have so much to learn about Thailand, and Songkran was a wonderful start. Other highlights of my first Thailand trip that I recommend you should check out: the glorious Pad Thai at Royal Thai Navy Club at sunset; “Muay Thai Live” theater show; the over-the-top Ancient City museum park; the Line Village for chill picture-taking; and don’t forget the legit Thai massage.