Craving for inasal and home in Bangkok | Lifestyle.INQ ❮ ❯ 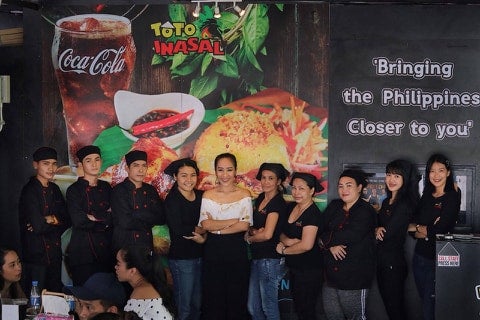 Jongkasem Platon center with her Thai and Filipino staff

Craving for inasal and home in Bangkok

For Bacolod native An Klein Javier, who has been working in Thailand for the past three years, home is where the inasal is.

Such was Javier’s image of home when she exclaimed “Inasal!” when asked what comes to her mind first if she thinks of home.

This link between home and food backs up the thinking of Jongkasem Platon, a Thai executive and restaurant investor, that people would think of home through food.

“Every person has some memory of food,” she said. “It is not only about fulfilling the stomach but more so, it’s like going back to their families, to their homes,” Platon said.

For Javier and friend Marie Dellano, another Bacolod native also working in Thailand, returning home is a six hour travel from where they work to Rojet Province in Thailand where they could eat inasal, or simply grilled, chicken at Toto Inasal in the Pratunam area.

They are among thousands of Filipinos in Bangkok and nearby provinces falling in line every weekend to fill their craving for Filipino favorites—dinuguan, embutido, liempo, Bicol express and inasal at Toto’s. Each order comes with unlimited serving of rice. And to beat the Bangkok humidity, halo-halo is offered, too.

The menu at Toto is plain—no translation to Thai or English, just the names of Filipino dishes as these are known in their country of origin.
So halo-halo is not mixed-mixed, dinuguan not pork and blood stew or inasal isn’t charcoal-grilled chicken.

At Toto, Filipinos working in Thailand don’t feel just at home. They are at home, freely speaking in Filipino and their dialects.

Thailand couldn’t be a better location for an inasal restaurant. The country is known for its street food, spicy cuisine. At the Ratchathewi District, a business area known as Pratunam draws different nationalities with its international cuisine—Indian, Mediterranean, Russian, Japanese, Chinese and Middle Eastern. A food babel in Thailand, every corner of Pratunam has a restaurant.

In a 2019 survey by YouGov, a UK based company, Filipino food, however, is fourth among the least popular out of those from 24 countries. Chinese, Japanese and Thai food are the top favorites.

Does this mean it’s difficult to market Filipino food in Thailand?

“No, we have a target market for inasal,” said Platon, who owns Toto’s. She said the inasal joint is bringing life to an otherwise unproductive space on a soi (small street) in Ratchathewi.

The Filipino crowd that gathers at the restaurant on weekends helps promote her other food stalls, she said.

Stalls like those in food courts sell different food in Thailand. Stalls selling food don’t offer water or drinks which are sold by other stalls. It makes for a balanced way of selling—everyone earns.

Philippine Embassy data showed that there are some 17,000 Filipinos in Thailand mostly teachers, engineers, entertainers and development workers.

Platon, who is married to a Filipino, said she did not only fall in love with a Filipino but with Filipino food, particularly chicken inasal.

“In my previous company, I worked with a lot of Filipinos. I am very affectionate towards the Filipinos. They are very charming and attractive people and most of all they have strong family ties,” said Platon, who is married to Lawrence Platon, a lecturer at Srinakarinwirot University in Bangkok.
Her relationship with Lawrence, however, was not the main reason she ventured into the food business.

“We visited the Philippines ten years ago. I tried a lot of Filipino food, but only one made me crave for more. It was not adobo, but chicken inasal,” Platon said.

In December 2018, she decided to open Toto Inasal after some two months of trial and error in finding the right marinade for the Bacolod dish.

“Everyday, me and my husband created different mixtures to marinate the chicken legs. I am very meticulous to taste. We tried around 60 different soy sauces but nothing comes close to the taste. We decided to source the ‘toyo’ from the Philippines just to get that authentic Filipino taste,” Platon said.

Part of their preparation to open Toto was to bring in calamansi (small lemon) seedlings and atsuete (food coloring) from the Philippines. These are grown or kept in her parents’ farm in Roiet Province.

Platon created the logo and was behind the Toto Inasal brand. She also designed the food presentation. Lawrence was in charge of food preparation. They currently employ 18 workers in shifts.

Platon believes in food as culture that brings memories along with it.

So Platon carefully selects ingredients for her inasal. “Every ingredient has its own memory,” she said.

“If I change it, I’ll change the story. If I use manao (Thai lime) instead of calamansi or food color, instead of atsuete, it is easier. But the diner will feel that something is amiss,” she said.

Since accepting orders in December and opening the kiosk in June, Toto Inasal has served different nationalities, usually friends of Filipinos. The joint is also now becoming popular among Thais.

Platon laughs when she recalls other nationalities getting surprised because Toto serves unlimited rice. “For online deliveries, we serve two large cups of rice,” she said laughing.

Platon does not see competition from other Filipino restaurants in Bangkok because they are each unique in menu and branding.
“Everybody can express their creativity, as long as they deliver the value to the people,” Platon said.

She welcomes suggestions in her Facebook Page which now has 45,000 likes. She personally replies to queries and suggestions.

“What I like most about Filipinos is the way they care. I am thankful for that. I take their suggestions seriously because we are here because of them. I’m not hurt if there are negative comments,” Jongkasem said.

In the future, Toto Inasal will cater to not only Filipinos in Pratunam. It already has a waiting list for a stall at Siam Paragon, the poshest and one of the largest mall in Thailand.

“You know your business is gaining ground if it is at Siam Paragon,” Platon said.

As they finished their meal, An Klein and Marie recalled their inasal at Manukan City in Bacolod. “Each inasal has a distinct taste. But this one comes closer to home,” An Klein said./TSB