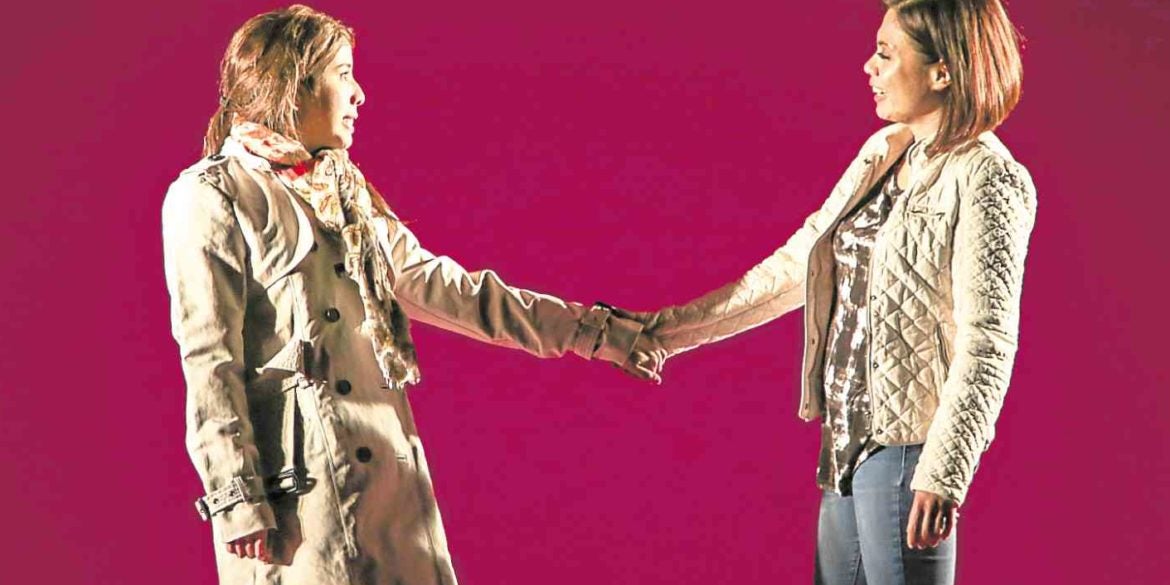 ‘Stop Kiss’: A powerful argument for how understated sensitivity can enhance advocacy

It is easy to see Diana Son’s “Stop Kiss,” opening so soon after Pride Month, as an eloquent advocacy for the acceptance of alternative lifestyles, and an indictment of toxic attitudes toward people perceived as different.

That is expected, as the story centers on a horrific assault on two women observed kissing, and on the face of it one may justifiably expect the play to be suffused with revulsion and outrage, calls for retribution, or jeremiads about societal bigotry.

Yet what informs the production directed by Ed Lacson Jr. is something else: Yes, there is terrible pain, physical and emotional, but overriding it are quiet courage, affectionate humor, and the growth of love that is all the more palpable for being tentative and undemonstrative. And, in the end, again unspoken, hope.

By no means do all that make light of what the protagonists go through, but what renders the play so beautiful is the strength the characters draw from their unshowy qualities to assert themselves against their tribulations.

That the play successfully affirms this strength without melodrama or didacticism is a testament to how understated sensitivity can render a stand for truth and self all the more powerful—how it can enhance advocacy and struggle into a celebration of humanity.

What brings this spirit into achingly luminous flesh are the wondrous performances of the two leads, no mere personifications of principle, but saucy, poignant, funny young women, with lives enmeshed in dead-end or fulfilling jobs, thwarted or tentative relationships, squabbles over fashion or pets.

Jenny Jamora is empathetically engaging as Sara, the naïve ingénue uncertain of her footing in the big city, idealistically tackling a teaching job in a challenging environment.

Missy Maramara has the more complex role as Callie, seemingly the hard-boiled self-reliant woman of the world, but revealed to be trapped in a drab job and incidental liaisons; her pivotal moment, when she has to recount the assault to a police detective, is absolutely wrenching.

The awkward, almost timid, sometimes petulant progress of their mutual attraction is both charming and heartbreaking to behold, and is a triumph of understated acting.

Supporting them are an array of minor figures who may seem incidental but provide nuanced context to the lives of Sara and Callie.

Robbie Guevara as the probing detective who draws out the story; Jay Valencia-Glorioso as a nosy, faux-liberal observer not above the salacious speculation; and most substantially, Tarek El-Tayech as Callie’s rambunctious friend-cum-occasional lover, all deliver on-point cameo doses of humor and off-key insight into their world.

Gabe Mercado is rather less persuasive as Sara’s ex-partner, in an admittedly unsympathetic role.

Complementing the stellar performances is Lacson’s exquisite direction. The bifocal structure of the play, alternately portraying events before and after the assault (itself never shown), is handled beautifully by a sliding panel that shifts the action back and forth between different time frames without cumbersome stage entrances and exits. And the blocking of the characters as they likewise shift frames, is nothing short of marvelous.

As well harnessed seamlessly to the total mood and pace of the production are the designs for lighting (Jethro Nibaten), sound (Teresa Barrozo), costume (Tata Tuviera) and sets (Lacson himself)—collectively speaking of brilliant directorial vision and execution.

If a cavil may be permitted to this otherwise engrossing production, it would be the occasional narrative flagging in the second act, where some segments that veer from the central relationship overstretch the material; in the interest of rounding the drama, they also sacrifice some focus.

But that is a matter of nitpicking. What Lacson, Maramara, Jamora and their collaborators have given us is a memorable demonstration of how the strength, humor and quiet love of two women can override the pain that prejudice and violent impulses can inflict on them. Without moralizing, this play is a moral that speaks to our times. —CONTRIBUTED