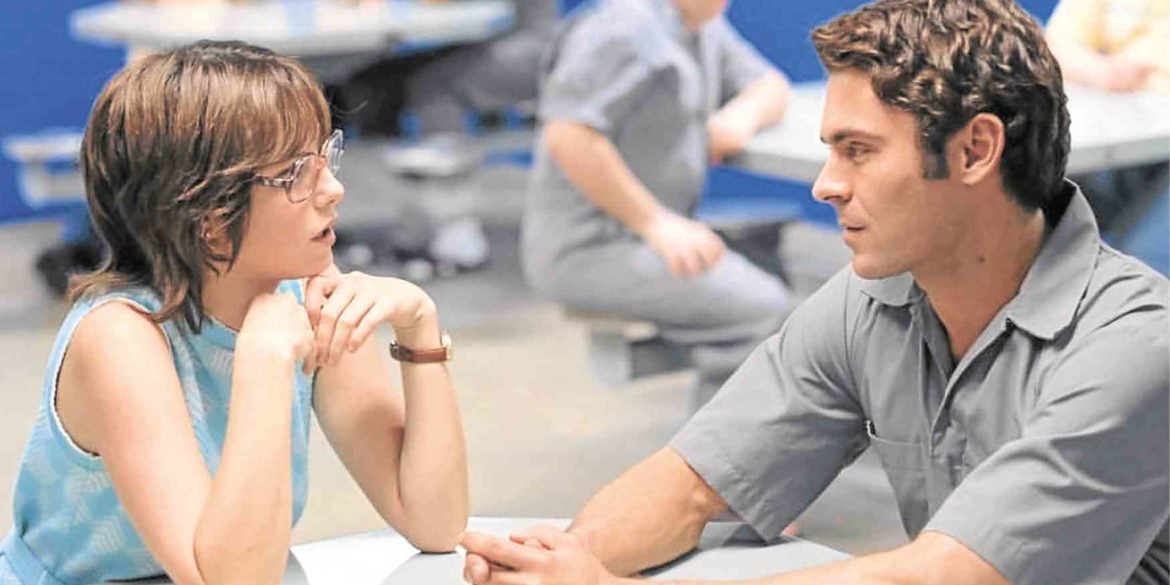 There will likely be people coming in to watch this film who have no idea who Ted Bundy is or what he’s done, who may have just seen the cast and thought “Oh, Zac Efron and Lily Collins, they’re both attractive! This is a long title for a movie, but why not?” And if so, good for them; those are the ideal conditions to watch this film from Oscar-winning documentary filmmaker Joe Berlinger. They might relate to Lily Collins more, here playing Liz Kendall, whose book is the inspiration for the movie.

“Extremely Wicked, Shockingly Evil, and Vile” is about Liz and Ted’s relationship. In the late 1960s, she is a single mother working as a secretary who is wooed and charmed by the young law student Bundy. Soon enough they are a couple, and already talking of their future together and settling down before a random traffic stop results in Bundy being arrested and charged with out-of-state crimes. Thus begins Bundy’s journey through the legal system, professing his innocence the entire way, promising Liz that they will be together again when he is exonerated.

Earlier this year Berlinger brought us the Netflix true crime docu-series “Conversations with a Killer: the Ted Bundy Tapes” about the same subject. Not content to have just one project on Bundy, he was also working on this, his first nondocumentary drama since 2000’s “Blair Witch 2: Book of Shadows.” His career being mostly focused on true crime documentaries, that style is evident here: the handheld camerawork, the actual news reports and relevant historical footage spliced in… it does come across as the “dramatic reenactment” parts of a doc, except without the voiceover narration.

The film makes a game attempt at hoodwinking the audience, much like Bundy did his victims. The casting of Efron is certainly a deliberate choice; handsome and charming, the audience is disarmed by his affections toward Liz and daughter Molly. In one scene, Liz wakes up alarmed, gets more upset when she sees her daughter isn’t in her crib, only to find Ted already making breakfast in the kitchen, her daughter in her high chair. What a guy, that Bundy, the scene says, while making sure to note that the entire time Bundy’s wielding a knife.

The film gets period details right, a credit to the production design, as well as the pushed colors of the ’70s. Alas, despite Berlinger being a likely expert on Bundy, the film’s pacing suffers with jarring tonal shifts that work at first but wear out their welcome with too much repetition. Scenes that Liz was not present for strike a mysterious note; perhaps they were filled in by other research, but the film seems to want a certain angle, but alas, it’s not always interesting. While Collins plays well, there aren’t too many notes to her performance: Liz is in love, is sad, in denial, but the inner turmoil doesn’t have much room to breathe, then is overshadowed by Efron’s outsize Bundy persona, the swagger and bluster and indignation. It would’ve been nice to see more of Liz’s life before she met Ted, to see why he had such an effect on her and why she continued to believe in him and his innocence way past any reasonable point.

While her resolve does eventually wear down, and scenes individually work well enough, altogether the dramatic arc of the film is a bit uneven. There are interesting points to be made: the sensationalism of Bundy’s trial (the first to be televised nationally in the US), how his looks and charm continued to rope in lonely-
hearts ladies and college students alike, who would sit in the gallery during his trial. One even marries Bundy and bears his child (a well-disguised Kaya Scodelario).

Overall, the entire Bundy saga feels like it could’ve been material for two movies. In keeping to Liz’s book, we never see the real monstrous nature of Ted Bundy save for gruesome details and one flashback, but the real problem is at the end of the film we still don’t really know much about Liz Kendall, either.