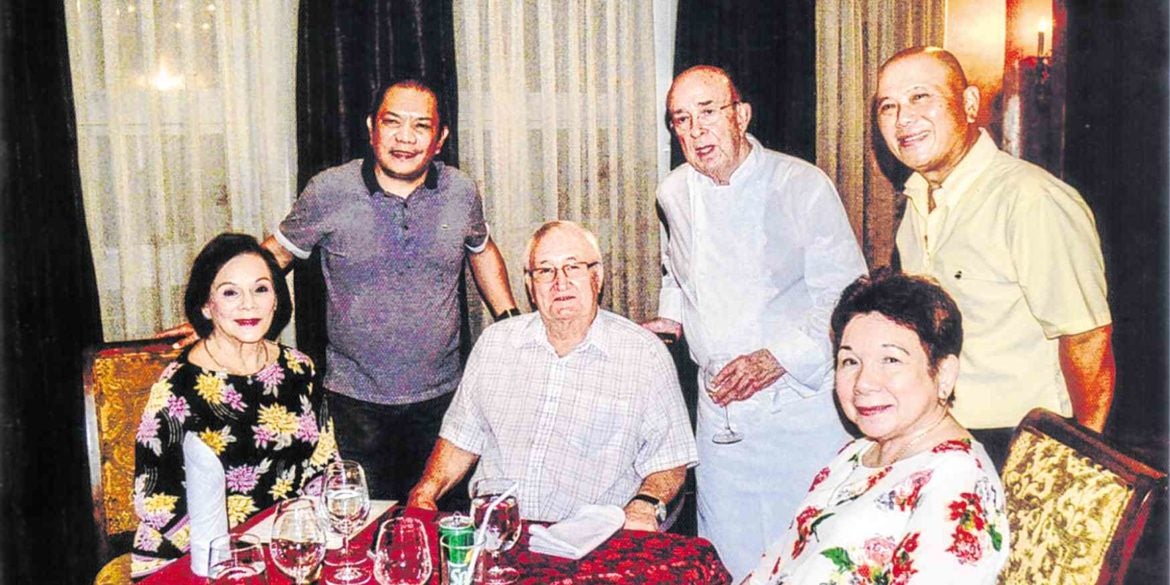 Wine distributor Happy Living and gourmet restaurant Terry Selection hosted an evening of authentic Spanish cuisine at the regular Saturday night buffet at the Casino Español de Cebu. It was quite a crush! Ninety people reserved but 200 surged as soon as the paellas were uncovered.

Chef Juan Carlos de Terry was present, personally cooking some of the dishes, and table-hopping to greet friends like Manuel and Margot Larrañaga. They were with Margot’s sister Myra Gonzales y Osmeña, president of Amigos de España en Cebu.

In turn, Myra was accompanied by her daughter Inmaculada with her husband Paolo Manguerra and their children Santi, Paloma and Ignacio.

Maribel Antunez was joined by Sonia Moras and her son Gavino Moras Jr., and Julina Muertegui.

Back at El Comedor, there was Paqui Aboitiz with daughter Diana A. Cacho and sister Quina Melendez. Yuki and Adela (née Avila) were celebrating her birthday.

At the lobby was a display of wines and Spanish products. It was suggested that Happy Living and Terry Selection have an outlet to serve Casino Español members. “We’ll study it,” said Dr. Diez.

Happy Living and Terry have opened a large warehouse for its products and wines from all over the world in Cabangcalan, Mandaue City. Soon, a deli outlet will be opened within Cebu City.

That will be on the ground floor of Annie Aboitiz’s Maryville building, just two blocks from where I live. “And I’m in the penthouse of the Maryville condo,” affirms Julina Muertegui.

As we said our goodbyes, we noticed a stretcher being wheeled out to a waiting ambulance. Seeing Chucho Larrañaga close by, we asked him what it was all about. His sister-in-law Myra had slipped on the terrace. She was hospitalized with a fracture in her upper left arm. Two days later, on Monday, she was discharged.

Because of that, Myra was unable to preside over the regular meeting of Amigos the next day.

All the tables were filled up with 30 members and guests present led by vice president Susan Sala and treasurer Julina Muertegui. Welcomed to the fold were new members Margie Richards Taylor and Marian Libarnes Miranda.

There was a film showing of the highly acclaimed Spanish film, “Los Ultimos de Filipinas” (The Last of the Philippines), which is based on a real life chapter in Philippine history.

Set in 1898, it’s about the defense of Baler in Luzon by a contingent of Spanish soldiers under siege by revolutionary Filipinos. The intrepid Spaniards resisted beyond the end of hostilities, when sovereignty over the Philippines was transferred to the United States.

For that reason and to commemorate the heroic stance, every year, on June 30, Philippine-Spanish Friendship Day is celebrated with a series of commemorative events in Baler.