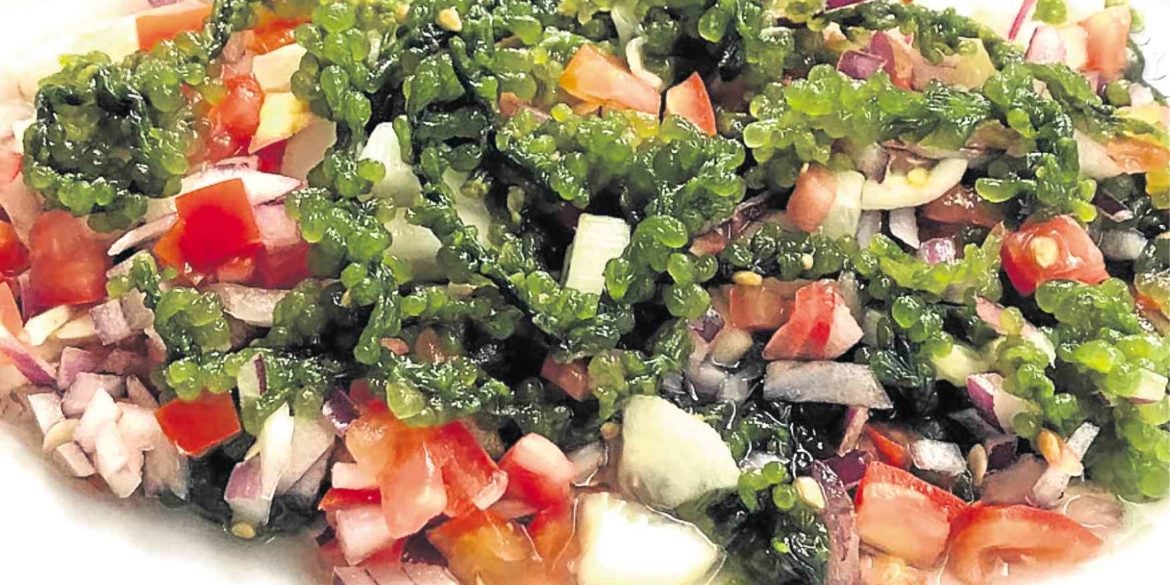 If there are mermaids, they probably would never go hungry—they can always feast on the seaweeds that abound in the ocean.

Lucky for us humans, we can partake of these seaweeds, too—that is, whenever they’re available. Seaweeds are rich in vitamins and minerals, particularly iodine, which is important for thyroid function.

My favorite seaweed is lato, also called arrosep. In English they’re called sea grapes because they come in tiny green clusters attached to a stem, much like grapes. When bitten, they burst like water-filled balloons, except they’re edible and juicy.

Here’s a recipe for lato salad.  I got the idea for it while dining in a restaurant that serves fresh seafood market-style. Lately they always seem to be running out of lato so, well, out of disappointment, I just decided to make my own lato salad.

Lato is available in wet markets and in weekend markets such as the one in Salcedo Village, Makati.

When buying lato, check if they’re stored in clean containers and are not just dumped beside raw meat or raw seafood (which can cause cross contamination). Choose those that look fresh and vigorous, with a color as bright and green as an emerald. Fresh lato  is shiny and sparkles like the morning dew.

Peel the onion and immerse in a bowl of iced water for 20-30 minutes to lessen its pungency. Set aside.

Cut the lato into three- to four-inch lengths, if desired. Wash the lato well: Sprinkle them with baking soda then put in a colander and rinse under running water. Make sure to wash off all the baking soda. Pat dry with paper towels then sprinkle with calamansi juice. Set aside.

In a bowl, combine the sugar and vinegar. Season to taste with salt and pepper. Stir well until the sugar has dissolved.

Pat the onion dry then dice finely. Transfer to a salad bowl and add the tomatoes, cucumbers and lato. Pour in the vinegar mixture. Toss well then serve.