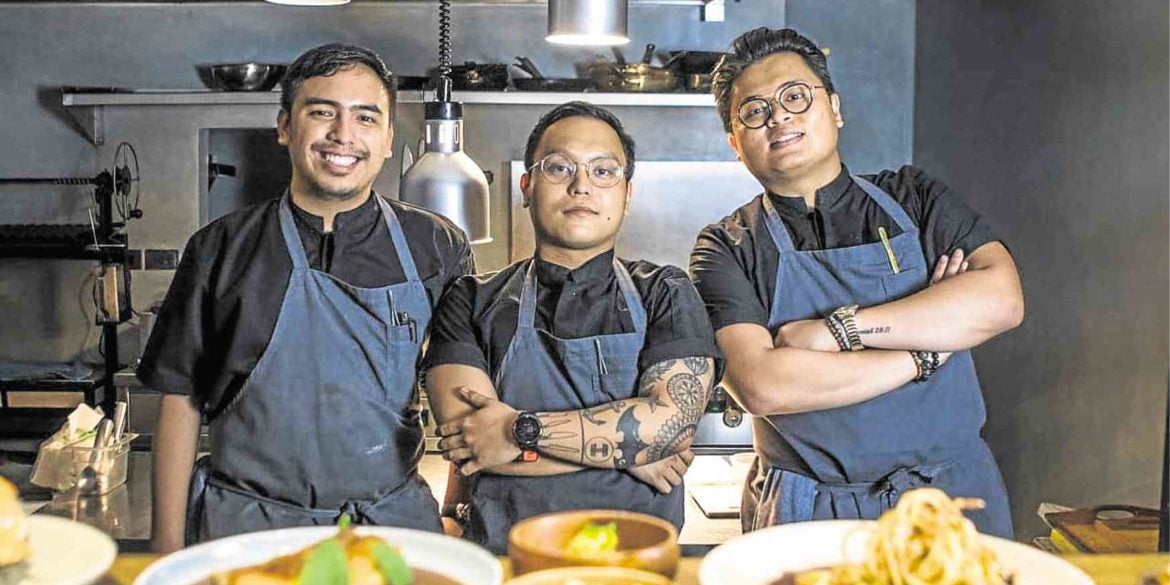 At Hapag Private Dining, tucked behind a lugawan on Katipunan Avenue in Quezon City, chefs Thirdy Dolatre, Kevin Navoa and Kevin Villarica have been serving what they deem as Filipino food without the fuss.

It’s food that doesn’t stray too far from the original versions, yet manages to pique tastebuds and curious minds with the presentation.

Hapag owners Dolatre, Navoa and Villarica were part of a group of friends in elementary and high school.

Dolatre was working at 3-Michelin Star San Francisco restaurant Benu, while Navoa was employed at Dewakan Restaurant in Kuala Lumpur, Malaysia, when they caught up and talked about opening a private-dining concept focusing on Filipino cuisine.

They tagged Villarica along; he was a chef for the in-flight catering company of Singapore Airlines and Poulet restaurant.

The three business partners hosted their first dinner for a band of entrepreneurs in December 2017. Their initial run was rewarding.

When the demand grew, the trio decided to open a 25-seater restaurant.

“We planned on building only a small commissary for our private dining,” says Dolatre. “But our clients wanted to know if we were going to open a restaurant, or if already had one, because they would love to dine with us. Those events showed our capabilities as young cooks to curate something new and interesting for the Manila dining scene.”

Apart from supporting farmers and artisans by using local produce, they would like to contribute to the thriving Filipino food scene worldwide by showcasing the diversity of the cuisine.

Their ginataang alimasag appetizer has all the components you would expect given its name, and the necessary flavors are present, too. But their version is more refined—coconut custard and steamed crab sit on a pool of squash puree, draped with a sauce packed with prawn flavor and crowned with bits of chicharon.

The sinuglaw has chunks of grilled pork belly and fresh market fish tossed in a vinaigrette of fermented green mangoes and tuba.

The crowd favorite, litson binagoongan, is composed of 24-hour slow-cooked pork that has been crisp-fried, then placed on a sauce of bagoong alamang and coconut milk.

And then there are dishes born out of the chefs’ collective creativity—juicy Aklan oyster and adobo aioli inside a buttery bonete bun; balls of laing with slivers of last year’s mango pickles; and soft banana hearts slathered with banana bagoong and sprinkled with pinipig-cashew-raisin granola for an interesting vegetarian dish.

Capping the meal are two dessert choices: mangga’t suman in the form of fried panutsa rice cake stuffed with mangoes, then topped with mango semifreddo and covered with shards of meringue; and the tropics, which is house-churned coconut ice cream with roasted pineapples, gluten-free poltroon and lattice made with fish sauce.

“We think of our food as something that pushes the boundaries of Filipino cuisine, yet gives you a sense of nostalgia,” says Dolatre.

Playing around with tradition is a risky move, but Hapag seems to be winning this arm-wrestle, owing to a repertoire that’s inspired and thoughtful.

The presence of at least one of the three talented chefs manning the kitchen and explaining the dishes to the guests personally, is something that has become quite a luxury in degustation dining these days.—CONTRIBUTED