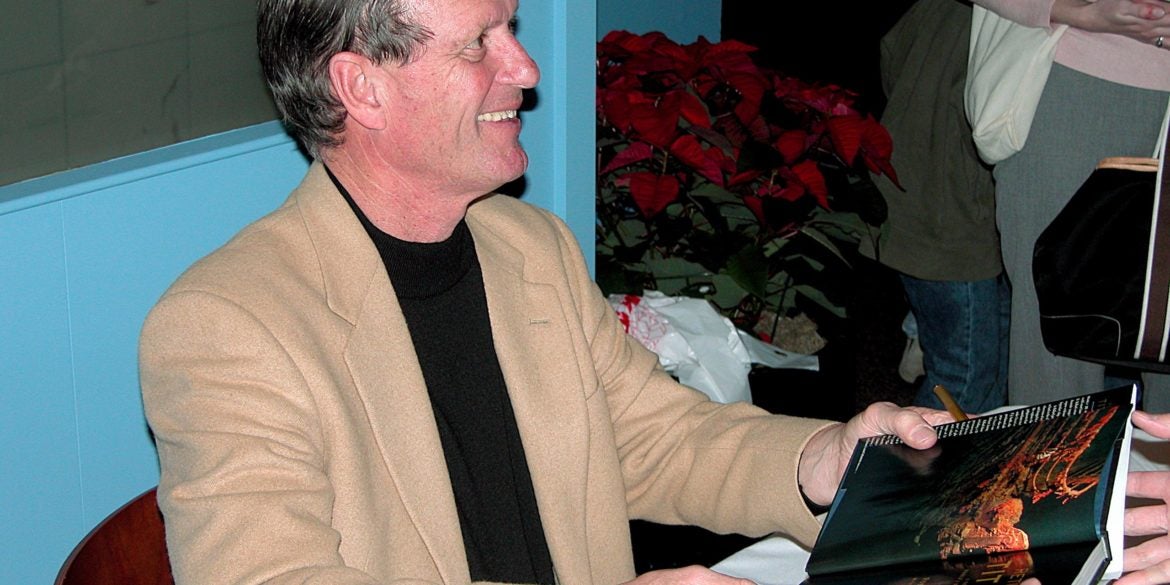 US-SCIENCE-TITANICExplorer Robert D. Ballard sign copies of his book "Return to Titanic" at a bookstore in Washington, DC, 30 November, 2004. Ballard discovered the site of the famous ship in 1985. He returned in 2004 to document damage done to the site by salvage operations and is campaigning for preservation of the remains of the ship which sunk on its maiden voyage in 1912. The book was co-written with Michael Sweeney. AFP PHOTO/CHARLES HOSKINSON (Photo by CHARLES HOSKINSON / AFP)

Robert Ballard, the underwater explorer who found the Titanic, has a new quest — searching for the plane of famed aviatrix Amelia Earhart, who disappeared over the Pacific in 1937.

National Geographic said Ballard plans to leave from Samoa on August 7 to carry out the hunt with his state-of-the-art research vessel E/V Nautilus.

National Geographic said it plans to film the expedition and air a documentary about it on its television channel on October 20.

Earhart went missing while on a pioneering round-the-world flight with navigator Fred Noonan.

Her disappearance is one of the most tantalizing mysteries in aviation lore, fascinating historians for decades and spawning books, movies and theories galore.

The prevailing belief is that Earhart, 39, and Noonan, 44, ran out of fuel and ditched their twin-engine Lockheed Electra in the Pacific near remote Howland Island while on one of the final legs of their epic journey.

One of the most popular theories is that Earhart and Noonan crash-landed on uninhabited Gardner Island, now known as Nikumaroro, part of the Republic of Kiribati, where she survived briefly as a castaway.

National Geographic said Ballard, who also located the remains of the German battleship Bismarck, would head from Samoa to Nikumaroro.

It said they will use sonar to map the ocean floor and deploy remotely operated vehicles, including one that can dive as deep as 13,000 feet (3,962 meters).

She and Noonan vanished on July 2, 1937 after taking off from Lae, Papua New Guinea, on a challenging 2,500-mile (4,000-kilometer) flight to refuel on Howland Island, a fly speck of a US territory between Australia and Hawaii.

They never made it.