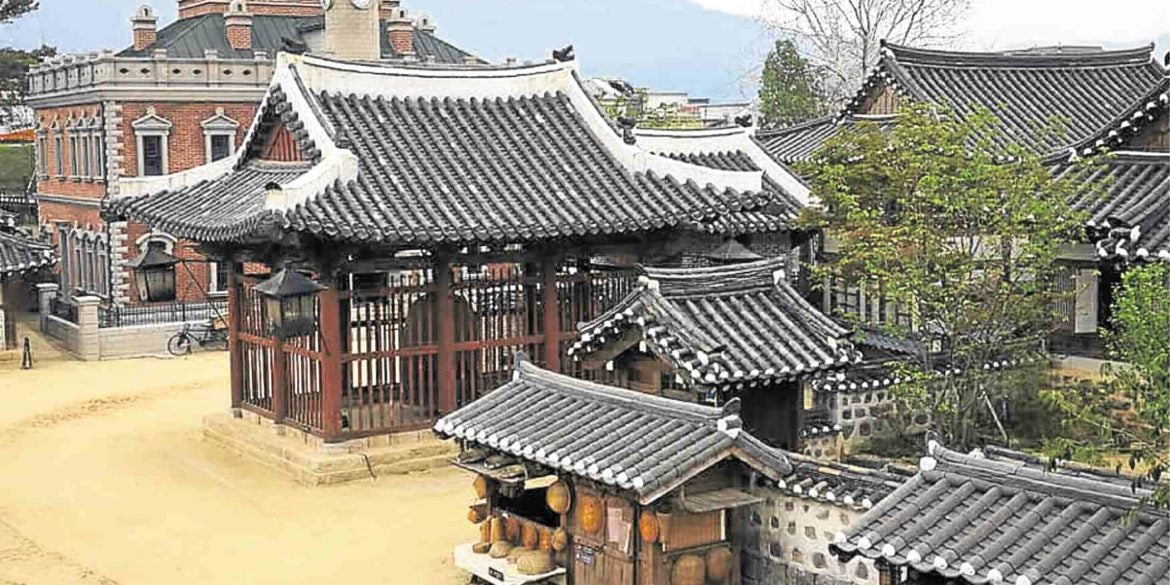 K-drama fans in the group were over the moon when we visited Nonsan Sunshine Land, the show’s filming location

Visitors to Seoul often head to tourist spots like Myeongdong where the street leading to the Cathedral is lined with food carts and stores.

The stores open mid-morning but the area really comes alive at dusk, when throngs descend to check out everything, from sheet masks and seaweed crisps to the latest fashion.

One can spend hours simply soaking in the sights or weaving through the side streets to emerge loaded with shopping bags.

The recent familiarization tour organized by the Korea Tourism Organization Manila, however, was designed around food, faith and fans.

Last June 12, our group took the red-eye flight to Seoul via Korean Air and arrived, bleary eyed at dawn.

We boarded our chartered bus and headed straight to Daejeon, South Korea’s fifth largest city. We stopped for breakfast of large bowls of piping hot galbi-tang, or short rib soup.

The meat, tender and hearty, was still attached to the bone. Our guide had likened it to Batangas bulalo. Instead of grappling with the bone, she instructed us to use the kitchen scissors provided.

The snipping motion made with our index and middle fingers became a shared joke, one that meant mealtime was near; it also served as the perfect icebreaker for our group of sleep-deprived lifestyle writers.

Throughout the trip, we dined on delicious Korean favorites: tteokbokki, spicy rice cakes cut into discs, cubes and tubes and mixed with all types of sauces; beef kalbi served on a heap on a sizzling plate; samgyeopsal, grilled pork belly, in a restaurant where we were the only non-Koreans; and crispy fried chicken coated with barbecue glaze or dusted with cheese.

We had been told on several occasions about the sheer variety of Korean kimchi—that it was more than just fermented pechay or radish—but we were still pleasantly surprised.

Of the kimchi and banchan (small side dishes) we sampled on the trip, those that stood out included white wood ear mushroom in a bright yellow sauce spiked with wasabi, thinly sliced dill pickles with strips of carrots and spicy red pepper, and steamed fish maw that was rich and gelatinous.

Our “pilgrimage” started with a visit to the Daeheung-dong Catholic Church, which is marking its centenary in November. The church whose patron saint is St. Joseph the Worker is a stone’s throw from busy Uineungjeongi Cultural Street.

When the church’s facade is lit up at night, it manages to hold its own in the commercial area with its soaring Sky Street. The 214-meter-long arcade-type LED screen which opened in 2013 displays videos and commercials nightly.

In Chungcheongnam-do, a province of South Korea, there are several Catholic pilgrimage sites—Solmoe Holy Ground, the birthplace of Korea’s first priest, Andrea Dae-gun Kim (born Aug. 21, 1821), and Shinri Holy Ground, the center of the Roman Catholic Church during the Joseon era. The latter has an outdoor chapel, its altar—actually the exterior wall of the indoor chapel—decorated with a bas-relief of Christ with arms outstretched.

One morning was spent in the Oeam Folk Village in Chungcheongnam-do gluing rice paper flowers on accordion-style paper fans. We walked up and down tiny streets lined with springtime flowers and enjoyed the cool breeze.

K-drama fans in the group were over the moon when we visited Nonsan Sunshine Land, the main filming location of “Mr. Sunshine.”

Sunshine Land is a multi-purpose cluster housing Sunshine Studio, the main set of the popular period drama. Visitors can walk around the set, pose beside building and store fronts, and even rent modern hanbok like those worn by the characters.

On our last day in Seoul, we boarded pedicabs (www.arteepedicab.com) and were driven around Bukchon, home to hundreds of traditional Korean houses called hanoks, some of which date back to the Joseon Dynasty.

We stopped in one cluster of homes that had been converted into a lookout point where we gazed over traditional tile roofs that shared space with new glass-and-steel structures.

In the “Mr. Sunshine” series, instead of saying “goodbye,” the leads choose to say “see you again.” For many in our group, plans to come back were made even before we boarded our return flight.