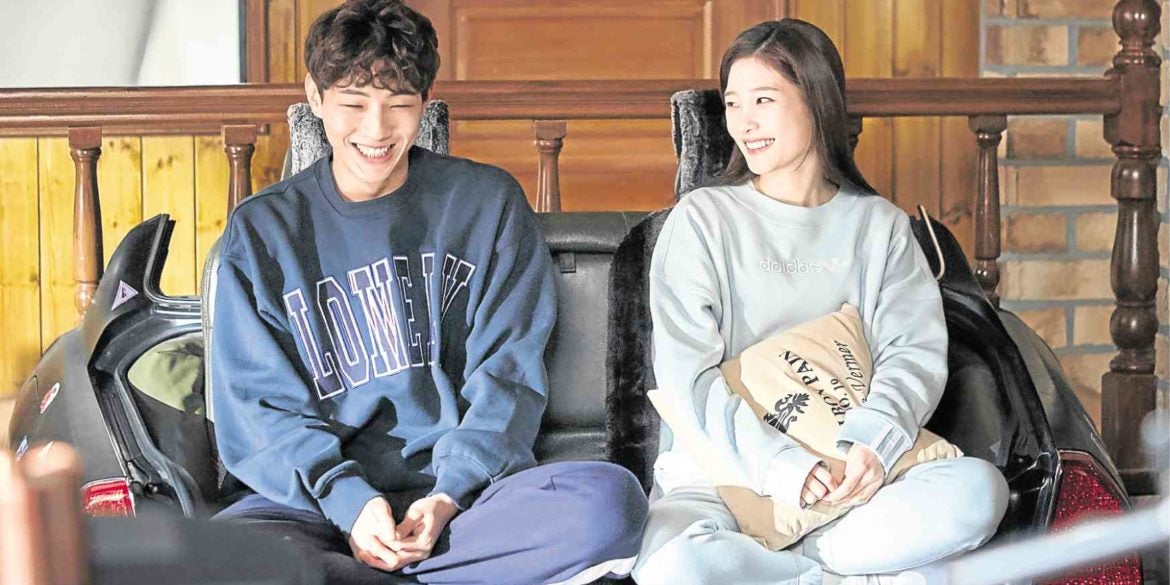 “I would like to say something first,” said South Korean actor Ji Soo. “Mabuhay!”

His greeting came as a surprise that it elicited laughter from a group of press in Manila receiving his video call from Seoul. He giggled at their reaction. Perhaps, he learned the word when he visited last year or when he starred in the Filipino independent film “Seoul Mates.”

The lead star of the Netflix Original “My First First Love” sat at the end of a conference table wearing a white long-sleeved shirt that had a black chest pocket. He looked relaxed and fascinated by the fact that he could be interviewed by people 1,627 miles away from him.

Ji Soo plays the character of Tae-oh in the series. We last saw Tae-oh walking away from Do-hyeon (Jung Jin-young) and Song-i (Jung Chae-yeon) while the latter two were kissing. In Season 2, which dropped last Friday, we see him deal with his discovery.

“What I don’t really like about my character is that he’s not good at reading the atmosphere. He could come off as an idiot sometimes,” he said. “But Tae-oh has a warm, good heart. And he’s a very pure character.”

In the first season, we know that Do-hyeon deserves Song-i. We were fine with how it ended. However, the second one will confuse us. Tae-oh is immature and lacks courage in facing his emotions. But he’s always there for Song-i whenever she needs him the most.

“Song-i is someone who is fun to talk to. You feel happy to be around her. If I were Song-i, I would have a very difficult time deciding between Tae-oh and Do-hyeon,” Ji Soo said. “I would date them both if I could. (laughs)”

The actor reminisced about the shooting for the drama. He said that his favorite memory was when everyone went out of town and they did not know each other yet. It was one of the first things they shot. The cast became closer after that and the shot became more fun.

He said that when the drama was over, the cast even did a picnic in the Hangang river to celebrate. Ji Soo revealed that he lives with his family now. He changed his mind after the drama and now thinks that it could be fun living with friends.

His character is at the center of the story. His friends came together because of him. Ji Soo said that this is exactly why he finds his character a good friend.

“The fact that Tae-oh let his friends stay in his house is the greatest act that he did for them. It is difficult to do. He was not willing for them to stay in his house, but he did anyway,” he said.

He allowed his friends to live and breathe at the expense of his comfort. In Season 2, we will see the lengths he would go for his friends. We will see the sacrifices he made for their happiness at the price of his own. Despite all this, it does not make him the perfect friend because like them, he is growing up, too.

“I remember this line where Tae-oh said, if you’re really a good guy then you don’t make her confused,” he said. “But then it was also self-contradictory as well because he was actually making Song-i quite confused as well. So this particular line is kind of staying with me for a bit.”

Super asked him what makes a friendship great because it is the main theme of the show. He said that truthfulness is the key to strong friendship. One of his popular friends is fellow actor Nam Joo-hyuk and we’ve been obsessed with their interactions in variety shows and on Instagram.

But the actor said that he has friends for over 15 years. The reason why they stayed with him is because he was always honest with them.

He also has a lot to say to his Filipino fans.

“Thank you for waiting for Season 2. And if you enjoy Season 1, you will definitely enjoy Season 2 even more. I hope all of you will be happy and I want your life to be filled with all the good things. I hope that I could visit the Philippines anytime soon,” he said to his fans. And when we thought that the interview was over, he told us that he had one more thing to say to his fans.