A love between two people that became love of country—despite themselves | Lifestyle.INQ ❮ ❯ 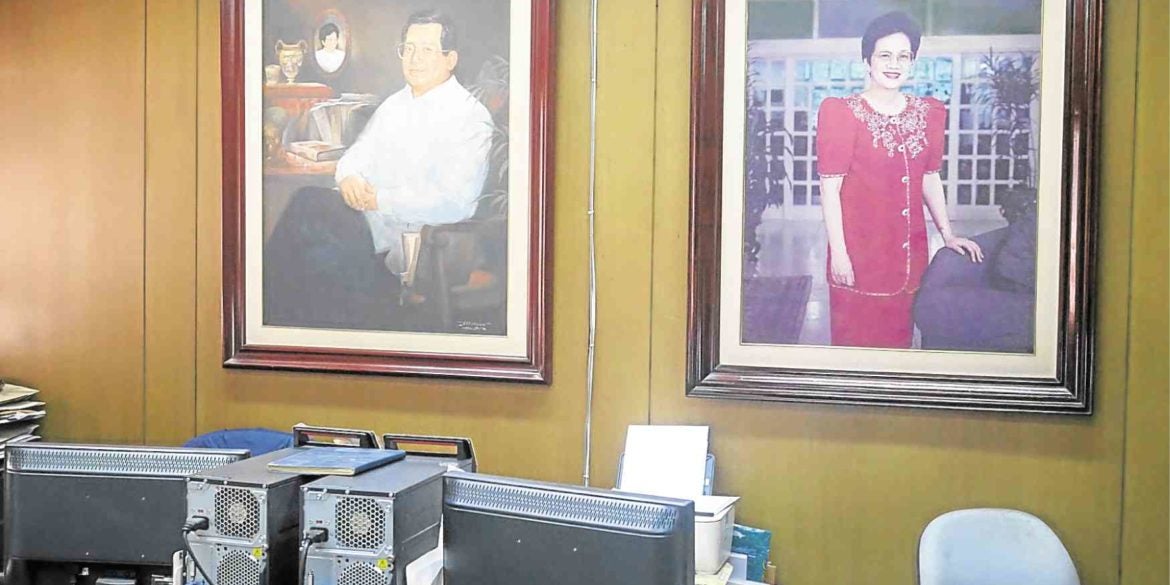 A love story: The portraits of the martyred opposition leader Sen. Ninoy Aquino and democracy icon Cory Aquino, side by side, in the late President’s private office.

The book ‘To Love Another Day’ by Rapa Lopa tackles the legacy of his aunt, the late President and democracy icon Cory Aquino

After the midterm elections, I was just so down. Maybe it’s time to talk to Auntie Cory about all these things.”

This was how Rapa Lopa finally sat before his computer to write a book on his aunt, Cory Aquino, the former President and democracy icon.

It won’t be ready for Aquino’s 10th death anniversary on Aug. 1. Lopa, son of Aquino’s older sister, Teresita, is still polishing the 116-page manuscript and has shown it to an editor.

“To Love Another Day” is the book’s title. It serves both as an explanation and an inspiration to Filipinos, that like Aquino, her husband, the martyred senator Ninoy Aquino, and their only son, the former President Noynoy Aquino, everyone is given a choice to love or not—our family, country, and people.

“I had the transcripts, got it all together and that’s when it dawned on me that this is how I want to write the book,” Lopa told us in an interview last week in his office at Cojuangco building in Makati.

“The message is there… but how do I convey that message in a way that makes people really understand also what she has done? And as I read all (her) stories, you can see the choice to love is there—to loving her husband, their children, the country and the people.”

Lopa imagined his aunt telling him, in these bewildering times: “True love begets true love. But remember that when you choose to say yes to the invitation to love, it demands continuous self-giving and self-sacrifice.”

It meant to be detached from any expectations of appreciation, recognition, and even love itself, Lopa said.

Lopa is president of the Ninoy and Cory Aquino Foundation, which aims to harness the leadership potentials of young Filipinos. The foundation has kept Aquino’s old office, just two floors up Lopa’s.

Pure and unconditional, brave and patient—this is the kind of love Aquino nurtured, the moment her husband, Ninoy, became one of the opposition leaders against strongman Ferdinand Marcos. Her life of privilege became replete with sufferings and challenges.

“We need to know the realities of where true love is called and where true love is actually expressed. That is what I am struggling to translate in the book,” Lopa said. “It’s very spiritual. How do I translate that into something that allows people to love, in spite of…? It’s tough.”

Lopa, who also works with Vice President Leni Robredo, said he’s no writer, although a quick look at the book’s draft shows a flair for writing and a style that is straightforward and engaging.

One chapter, “Fake News,” talks about Ninoy’s trial for subversion in a kangaroo court.

“They fabricated stories to pin down Uncle Ninoy. I put ‘Fake News’ so that we can relate it to present day,” Lopa said.

There are other chapters: “Looking for Pepe and Ninoy,” “Quality Time Found in Imprisonment” and “Crumpled Paper,” which is about the smuggled notes of Ninoy that led him and another democracy icon, Sen. Jose “Pepe” Diokno, to being incarcerated at Fort Magsaysay in Laur, Nueva Ecija.

In Lopa’s book, the reader could feel Aquino’s roller coaster of emotions as she went through the various episodes of her life.

Lopa recalled Aquino telling him: “I think what people don’t realize, everything that he did for this country was because he knew that was what God wanted him to do.”

Lopa said Aquino shared the story of how her husband was on the verge of giving up during his incarceration and had asked her to see how he could be put under house arrest instead.

In hindsight, Aquino had said, it was divine providence that there was no house arrest for Ninoy, and he was jailed in military camps because it gave him those quiet moments with God that led to his spiritual transformation.

“That was also who she was,” he added. “Her own life and her own choices were all about that. And that I actually told Father (Catalino) Arevalo: ‘Father, if there’s any legacy that I think people should remember now that Auntie Cory is gone, it’s that these two people who initially just decided to love each other in sickness and in health ’til death do us part, [had a love] that was transformed to love of country, love for people—never mind themselves’.”

We asked Lopa: Is that relationship being put to a test today?

“Of course, it is,” he replied. “Suddenly all the dilawan thing… everything that they’ve done is being demonized.”

He added, “But for me, what gives me peace of mind is ‘hindi naman importante yan, eh.’ I learned from [Aquino] to be detached from what the world has to say about me. But I have to admit that there are instances when I am still bothered. Especially if the call-out is one that makes me realize my own shortcomings to become the better person I aspire to be.”

Lopa is ready for the trolls once the book is released. He acknowledges that the two Aquino administrations were not perfect. And as a Cojuangco, he acknowledges that more could have been done for the sugar farmers of their family-owned Hacienda Luisita.

“I am sure the trolls and other people will say all kinds of things. Again, I go back to what [Aquino] said: ‘Hindi na importante yan, Rapa. We won’t be able really to touch everybody’s lives. But it’s really finding that extra push to say ‘Sige, mamahalin pa rin kita’,” Lopa said.

Lopa said that because of her commitment to love this country, Aquino had always shown courage and decisiveness, especially when she needed to step up to the plate and to lead the fight against the dictatorship, then step out of her private life as Citizen Cory to defend the Filipinos’ hard-fought democracy.

To her, among the non-negotiables were tinkering with the Constitution with the intent to perpetuate oneself in power, and the corruption that destroys the country’s democratic institutions.

Aquino led rallies against Fidel Ramos’ Charter change moves and sought the resignations of Joseph Estrada and Gloria Macapagal-Arroyo when they were embroiled in massive corruption allegations.

“She fought for democracy’s systems and processes,” Lopa said. “Even if she supported and believed in President Ramos, she did not want him to get tempted [with staying longer in office]. She was very clear: we brought freedom and democracy back so let’s give it a chance and let’s try to do something to really make it relevant to our people’s lives.”

In 2007, during the Arroyo administration, when the people seemed to be too exhausted to protest the wrongdoing in government, Lopa recalled his aunt saying casually: “Alam mo, baka dapat may mamatay.”

Little did Cory Aquino know she would be diagnosed with colon cancer in December 2008, and that hers would be a short 16-month battle. She was 76.

Little did Aquino know that her death would cast the spotlight on her only son, the unassuming senator.

The people’s clamor for Noynoy to seek the presidency in 2016 was a repudiation of Arroyo’s 10-year rule.

Asked about his cousin, P-Noy, Lopa said: “I believe he has his own unique relationship with God. I can only guess he has his own unique questions, debates and conversations with the Lord. But it is probably much the same way that his father, Ninoy, interacted with his God and eventually found his own spiritual transformation.”

Shortly after Aquino died, Father Arevalo, the Aquino family’s spiritual adviser, told Lopa he must write a book about her.

“Maybe two years after she passed away, we had a conversation about what Auntie Cory’s life meant to us, or how essentially, she touched our lives,” Lopa said.

He had worked for his aunt for 16 years, in her non-government work after her presidency in 1992.

The materials for the book were easy to gather. Lopa had the transcripts of the videos of Aquino taken by the foundation after she had begun writing her memoir.

In the videos, she narrated her stories. For some reason, they ended with the declaration of martial law. These are never-before-seen videos of Aquino, Lopa said.

Since they never got to talk about her life as President, Lopa included Aquino’s last State of the Nation Address, which she wrote with then presidential speech writer, Teddyboy Locsin Jr. Yes, the same Foreign Secretary we encounter on Twitter these days.

Lopa also used his personal essays and articles in the book. But since most of the stories in the book contained Aquino’s own words, “To Love Another Day” could be considered her autobiography, too, Lopa said.

Lopa and his cousins, Aquino’s daughters Ballsy, Pinky and Viel, want the book to be released on Nov. 27, Ninoy Aquino’s 87th birthday.

In the book, Lopa wrote: “Honestly, I sincerely believe that I have a story to tell. This story has constantly accompanied me in my own life journey. It has always given me hope when I despair. It has always humbled me when I feel entitled. It has given me courage when I am paralyzed by fear. This inspired me to be more compassionate when I am tempted to be indifferent.

“But more than anything, it has moved me to love whenever it is most difficult to do so. This is a story that we are all very much part of without us knowing. It is a story that is relevant even to our unfolding story today. It is about a woman whose life-changing choices made her story tightly intertwined with her country’s and people’s history. The story about courage, vulnerability, fidelity. It is a love story.” —CONTRIBUTED