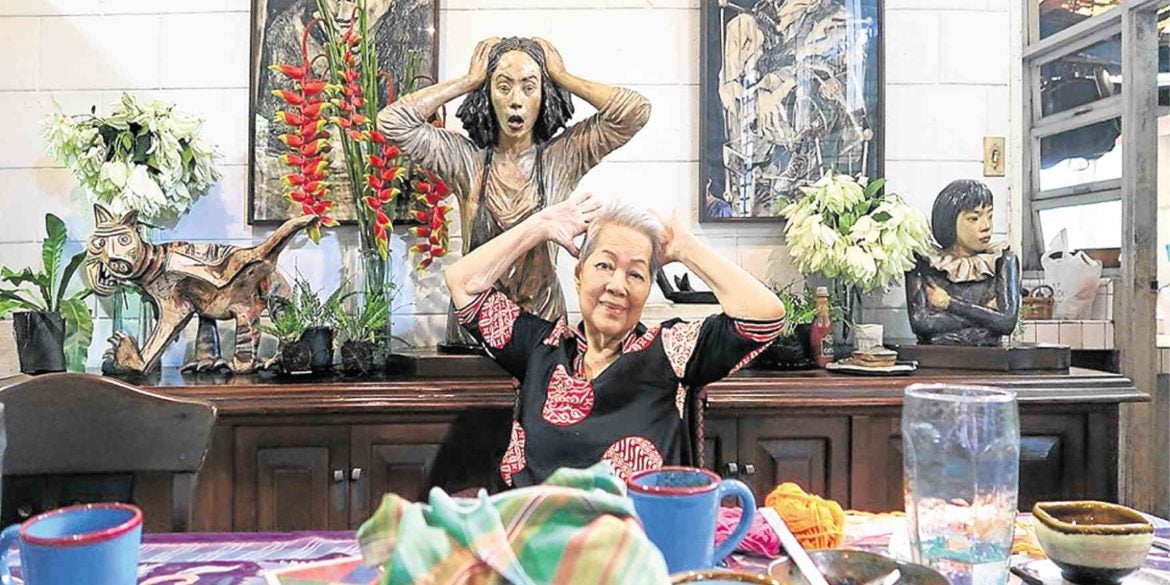 Gilda Cordero Fernando and a background of paintings by Onib Olmedo, the sculpture “Picasso y Yo” by Julie Lluch and a table brimming with colorful objects

Gilda and her lipstick ladies

As these recent months passed by, I saw how she retreated more and more into her silence. But the graciousness and vanity remain

At the First Draft group of writers reunion with Gilda Cordero Fernando, I felt that her facial recognition of some persons, even those close to her, was going. Her oft-asked query was a wide-eyed, “Sino ka (Who are you)?”

Riding home with her, I thought I could engage her in a conversation, one punctuated with pleasurable gossip, but the words were few and far between. She’d gaze out of her side of the window and call out the names of the stores and signs she saw: “SMDC!” “Bench!” ”Jollibee!”

And then she turned and took my hand in hers and caressed the back of it. I wanted to weep for all the words—the tools of her former trade—that will no longer come from her.

She used to be my middle-of-the-night and other times textmate. I miss those long text messages because there is none forthcoming anymore unless it’s her help who punches the words for her.

We used to make fun of each others’ makeup and beauty tips. When I said I was getting compliments for my looks without my having to do anything about them, she texted back, “I think that’s the secret. Don’t try so hard to look good. Don’t buy expensive health pills and add them on to your already fat meals. Just be natural. BE ANGRY AT YOUR MATE.”

One time we both worried over our sleeplessness. I was dependent on pills to help knock myself out. Gilda got new prescriptions for them from her doctor. She described their effects on her: “I’m on my sixth day of tranquilizers and sleeping pills. It’s making me feel weak, sleepy and witless. It’s supposed to put me back on schedule. IT BETTER WORK.”

When she grew more irregular about her Sunday column in Inquirer Lifestyle until she totally stopped writing, she complained about the source of her unproductivity. “What I’ve really lost is the desire to live. I don’t belong to this world of travels, countries and restos I’ve not been to. I’m not part of the techie world, I’m marginalized, I don’t belong anymore, period. Still productive, but till when? I keep plagiarizing myself from books I’ve written and published.”

No matter how I and some friends assured her that “plagiarizing herself” was fine since she was addressing a younger and newer audience or those who missed out on reading her groundbreaking books, she didn’t sound convinced.

As these recent months passed by, I saw how she retreated more and more into her silence. But the graciousness and vanity remain. The desire to “see the world” outside her boudoir was still there. Even if she was entertaining a guest or two at home, her face was always powdered and made up. Lipstick was applied, and always there was something dangling from her ears.

But not this particular Wednesday when a group of women that essayist-fictionist Menchu Aquino Sarmiento called a “coven of cute” organized to host a lunch for Gilda at Fat Russel’s Kitchen on Scout Castor, Quezon City. They were the same ones who had met at Gilda’s Panay Avenue house in her birth month of June last year.

In a Facebook conversation thread after freelance writer Alma Cruz Miclat posted her family lunch photos at Fat Russel’s on Father’s Day, it was decided that it was a good place to bring Gilda for a treat, our modest way of paying her back for the generous attention and love she poured on us as she was struggling to make sense of the world. That’s how long we’ve known her—our young adult years all the way to senior citizenship.

Teacher and Gilda’s neighbor Belai Gruenberg reported that the honoree was pouting when she boarded the car. It turned out that Gilda forgot to put on her earrings and felt so bare. Nevertheless, she looked perfectly turned out in matching blouse and pants with cloth espadrilles.

When her order of truffle pasta arrived, she dug into it con gusto and fed herself without assistance, except for Alma’s mixing the cheese with the pasta.

Meanwhile, Carole Tysmans distributed loot bags each containing a printed handkerchief, calming oil, See’s lollipop, Japanese crackers and Ever Bilena matte lipstick mostly in the color of Toast of New York. We squealed in delight like children at a kiddie party. Gilda was also visibly pleased.

Carole explained that whenever she visited Gilda in her youth, she would go home with a lipstick, a new pair of earrings or some other trinket. She felt she had to pay the gesture forward to us, les girls.

I felt that Gilda was slightly disoriented when she asked me, “Why are we here?” referring to the restaurant. I answered that we were on an extended celebration of her 89th birthday. Her next question was, “Why are we going to my house later?” I explained that her daughter, the horticulturist Wendy Regalado, offered to co-host coffee, hot chocolate and dessert there. Gilda nodded to show she understood.

At the Panay Avenue abode, the first thing that caught our eyes in the sala was the newly installed small sculpture of Aba Dalena depicting her Tita Gilda as the fairy godmother of art and culture.

The honoree had a little of everything. We almost applauded every time she took a forkful of something, chewed and swallowed. Wendy shared with us how her mother had a poor appetite and sometimes would refuse to eat her meals. To stimulate her appetite, they’d take her out to try food she liked at certain restaurants.

This made me remember theologian-writer Melba Padilla Maggay’s observation of Gilda—that hers is a charmed life.

How blessed we are that we continue to partake of that life. Since verdict on the deliciousness of Wendy’s mulberries was unanimous, it was decided on that the next get-together would be in the rambutan-picking month of October in Antipolo

Meanwhile, we formed ourselves into the Gilda Cordero Fernando Fans Club (initials of GCFFC) with her approval. —CONTRIBUTED