Stretching becomes chief business just before I finally hit my first ball. After all, how I feel on that day, will determine the quality of my tennis—and my day 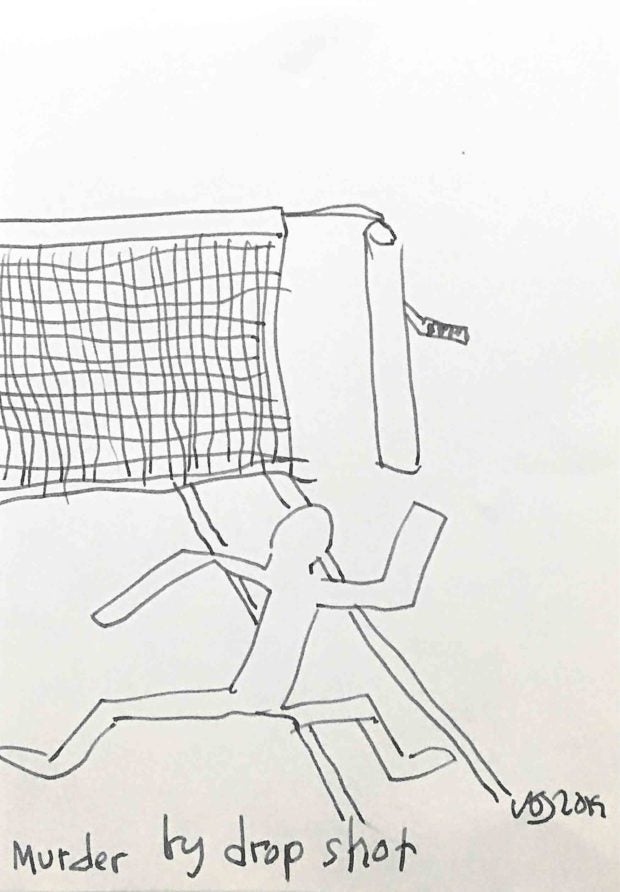 A mere six-and-a-half years to that milestone and able yet, all things considered, to hold my own pretty well—
thank you—against younger fellow seniors and even some nonseniors, I might seem raising an unremarkable self-challenge. But, with the fragility of life that naturally comes with aging, one never knows. That’s why I prepare for it every day.

This I do basically by listening to what my body is telling me, and, on my tennis day, I listen more intently. I listen even as I begin stretching, upon waking. Generally endured more as a ritual than a precaution, stretching in fact takes on an added dimension and intensity for me. It is actually a constant side activity to whatever else I’m doing; it becomes chief business just before I finally hit my first ball. After all, how I feel on that day, will determine the quality of my tennis—and my day.

But I’m conscious not to throw caution to the winds even on days that I feel sharp. I do not for one moment forget that I’ve reached the vulnerable age, an age that in tennis is put to the ultimate test by the drop shot.

Oh, the drop shot! The mother of all shots! You’d love it if you had it in your arsenal; otherwise, you’d loathe it. As an old man who certainly can use a quick point, I’ve made it a point to be armed with the drop.

It’s a shot executed with a sharp, chipping stroke that undercuts the ball to give it a backspin and kill its bounce at the same time. Deployed with a decidedly malign intent, it is aimed to fall on either of the fore corners of the opposite court, where just outside stand the net posts and not far off on one side the umpire’s high chair, structures that can break the momentum, not always harmlessly, of a possessed competitor. I’ve seen that nasty shot incite bravado that resulted in some blood. Me, with a life experience with it, I think I know instinctively when to do nothing with it.

Listening to your body

When you’ve been at tennis as long as I, and play as often, and studiously enough to have played it safely, yet pleasurably, into old age, listening to your body happens as a matter of course, so that you become quickly conscious of the two physical changes in you that most affect your tennis: You’ve slowed and weakened. The most intense and critical part of that listening happens while you’re chasing that ball and striking it back, and getting set for your next shot and staying in the exchange until the point is ended, hopefully in your favor.

There goes the life cycle of the game itself. It centers around a little, yellow, fuzzy ball whose own life, if you will, is not self-driven but reliant upon its being hit right: a bad hit or a miss kills it and decides the point, and eventually the match.

I don’t know that any profound philosophy lies there. All I know is that I feel good simply stepping onto that court and running around hitting that ball. If I seem nuts about tennis, it is only to the extent that it gives me a sense of well-being all around. Winning may have long ceased to be the object for me, but not to the degree that might put me in danger of losing my competitive spirit, itself a downside not unlike depression.

In fact, early in my 60s I began adapting to the realities of seniorhood in relation to tennis by testing theories that I developed on my own in hopes that they would carry me to the peak of my residual potential. I switched to a lighter racket, looser stringing, and a short backswing for a suitable combination of control and power—well, some power. I turned my grip outward, or eastward (hence, Eastern Grip), so that I could hit that ball standing square, thus saving myself the extra movements for the sideways positioning that my old grip—the Continental—calls for. I developed the habit of putting my racket in my free hand between points to rest my hitting hand; its cumulative effect, I must say, only proves all too sensible.

Already braced around my left knee and ankle, both gone bad from younger days of contact sports, basketball in particular, I have yet taken more precautions: I go into a more serious cool-down routine than I do normally, then wrap ice packs around both knees and ankles as well as the wrist, elbow and shoulder of my hitting arm, and before bed rub liniment on those working parts.

With all those adjustments, I have not only maintained my win record but bettered it. Of course, I’ve been pickier with opponents, but, heck, I’m pushing 74! —CONTRIBUTED