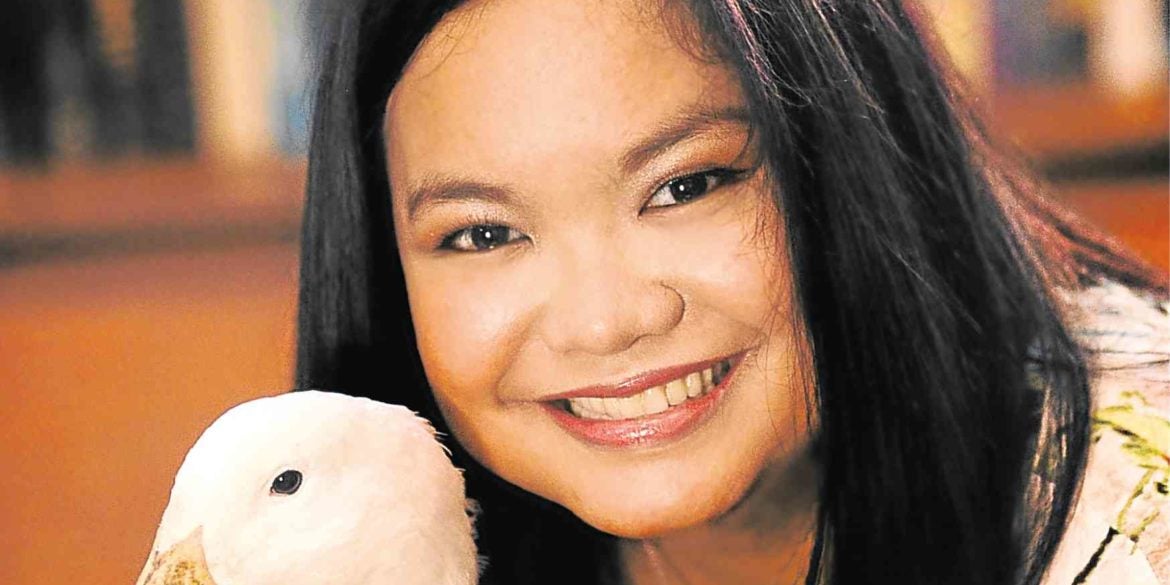 Gail D. Villanueva with her pet duck, which also figures in her novel.

Gail D. Villanueva’s middle grade ‘My Fate According to the Butterfly’ features a winning protagonist and talks about family, superstition and growing up in Manila

When you see a black butterfly, it means death is coming. This is a powerful superstition in the Philippines, and Gail D. Villanueva was just a child when she first heard of it.

“I first heard about it from my grandmother. The funny thing is that she doesn’t believe in it herself, but I did and still do,” Villanueva said. “I believe I saw the butterfly before my friend died, and when my grandmother herself died. I usually get this awful feeling of dread whenever I see it before I get news of someone I know dying, but at the same time, I feel comfort whenever I see the butterfly after losing someone I love. This butterfly and I have a really complicated relationship.”

That complicated relationship became the heart of a novel, an extraordinary one. Villanueva, 37, is the author of the middle grade novel, “My Fate According to the Butterfly,” from US publisher Scholastic Press, the same publisher who released Suzanne Collins’ “The Hunger Games.” Now Villanueva gets her chance.

Villanueva heard of the superstition when she was about the same age as the protagonist of her novel. Sabrina “Sab” Dulce, a 10-year-old girl living in Metro Manila, is turning 11 in a week when she encounters the aforementioned black butterfly. Believing that she will die in a week, Sab sets off to reunite her older sister, the aspiring journalist Ate Nadine, and her Dad, whom Nadine has not talked to in over a year.

Together with her empowering best friend, the American girl Pepper, the determined and precocious Sab finds out the unexpected truths about her family while journeying through the city (she also has a pet duck).

“My Fate” is set completely in Metro Manila and Sab has to deal with all kinds of grounded reality, such as the effects of the government’s war on drugs (There’s one really bracing scene). It is so convincingly set in that city that Filipino readers will recognize it immediately (It is so immersive; check out the disastrous MRT ride), making it a thoroughly Filipino story that readers from other countries can absorb.

“My Fate” is an utterly accessible, incredibly engaging coming-of-age story that balances the discovery of challenging truths with a child’s still-potent sense of wonder (The balance is reflected in the gorgeous cover from Baily Crawford and Oriol Vidal). Smart and sly, Sab is a winning protagonist (the duck helps, too). The book has received great reviews from Kirkus Reviews and School Library Journal.

Choosing to write a middle grade book (for readers 8-12) was a gift. “I tried my hand in writing for different age groups, but I always felt something was missing in my stories that I just couldn’t put my finger on,” she said. “It was when I looked at my mini-library and saw for what age group I should have been writing for all along—middle grade. About 85 percent of the books I owned, read and loved since forever are middle grade books. My heart has always been in middle grade. So I thought, maybe I should write middle grade instead. And I did. Considering ‘My Fate According to the Butterfly’ is releasing soon, I daresay I made the right choice.”

Aside from being an internationally published author, Villanueva writes code and designs websites. She had been writing for a while, and actually completed a middle grade historical fantasy, but shelved it. “I decided to focus on a new idea—one that was inspired by my relationship with my younger sister and the black butterfly superstition I’ve always believed in,” she said. “The political aspects, well, I wanted to set my book in present-time Metro Manila. I just couldn’t not include them.” 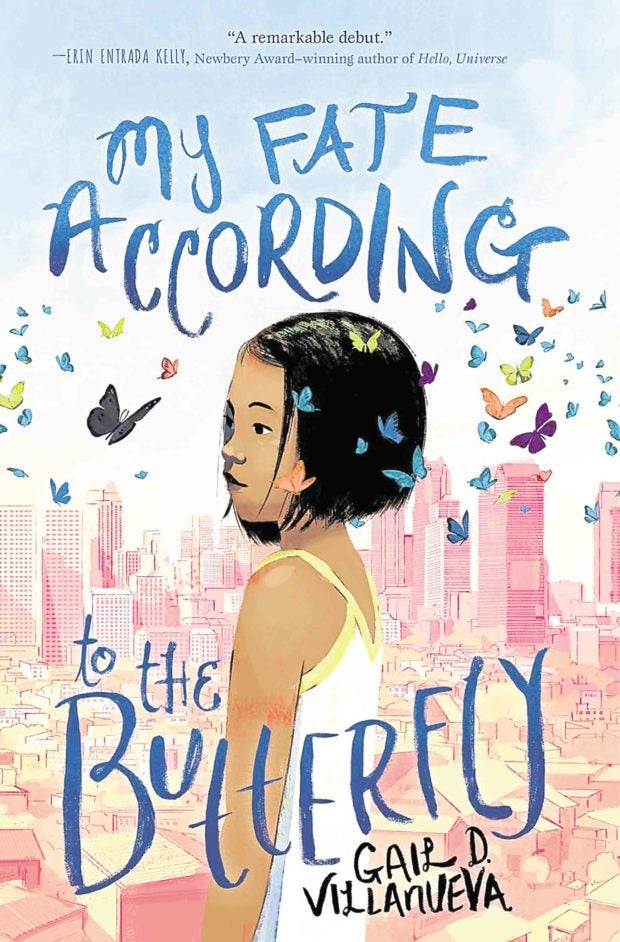 Villanueva wrote “My Fate” in a month and a half in 2016, with Newbery Medal-winning author Erin Entrada Kelly mentoring her. “She taught me a lot about style and voice in writing,” Villanueva said of that time. After looking for agents, she chose Alyssa Henkin of Trident Media Group. Henkin worked with Villanueva for half a year on revisions, and the book landed with Scholastic. “The funny thing is that almost every agent—including Alyssa—who offered me representation felt that my book would fit perfectly with Scholastic.”

Villanueva is sanguine about the prospects of “My Fate” in the US market. “After all, even though US publishing is now actively seeing diverse stories written by diverse authors, it’s still very white. My little Filipino book is basically going up a hill built with years and years of systemic racism.” She is excited to be fighting this with her agent and Scholastic by her side.

Now that “My Fate” is about to be released, Villanueva is hyped and humbled. “Surreal. Totally surreal,” she said of her feelings. “There are times I would stare at the hardcover copy of my book and wonder if this ‘Gail D. Villanueva’ on the byline really is me, and I’m not just some poser or something. I’ve always dreamt to see my name on a book one day. Now that it’s coming true, I wonder if it’s just a dream and I’d wake up and see that none of it is actually real.”

Villanueva, the daughter of award-winning Inquirer photo correspondent August dela Cruz, lives in Cainta, Rizal, with her husband and business partner Marc. Like Sab, she has a pet duck—actually she has several ducks, turtles, dogs, cats and a chicken. Her favorite duck, Quackie, has a Tumblr of her own. Not even kidding about that one: “I love my pets equally but Quackie is my favorite duck to photograph. She’s the one who really enjoys having her picture taken.”

She is certainly off to a great start, and Villanueva is staying busy. “I’m already writing a new middle grade novel. It also has a Filipino cast, but this time, it’ll be set in a fictional island in the Philippines. It features more magical elements and discusses consent, socioeconomical privilege and love in different forms. And oh, this time, my main character’s beloved pet is a dog instead of a duck.”

Right now, the spotlight falls on “My Fate,” which is about to make its global debut in the marketplaces, yet Villanueva remains firm in what she believes readers should take with them as they discover her work. “Empathy. Definitely empathy. Because putting ourselves in the position of someone less privileged than us help us become better human beings. It helps us not to fear other cultures, but instead makes us appreciate and respect them,” Gail D. Villanueva said. “And for readers who rarely saw themselves in the story they read, I know my book isn’t an absolute representation, but I hope somehow, someway, anyone who needs a mirror will find one in ‘My Fate According to the Butterfly.’”

“My Fate According to the Butterfly” will be available from bookstores beginning July 30. The book will be launched on Aug. 4, at 10:30 a.m., at Ballroom 1, Raffles Makati as part of the Philippine Readers and Writers Festival 2019. Visit gaildvillanueva.com.