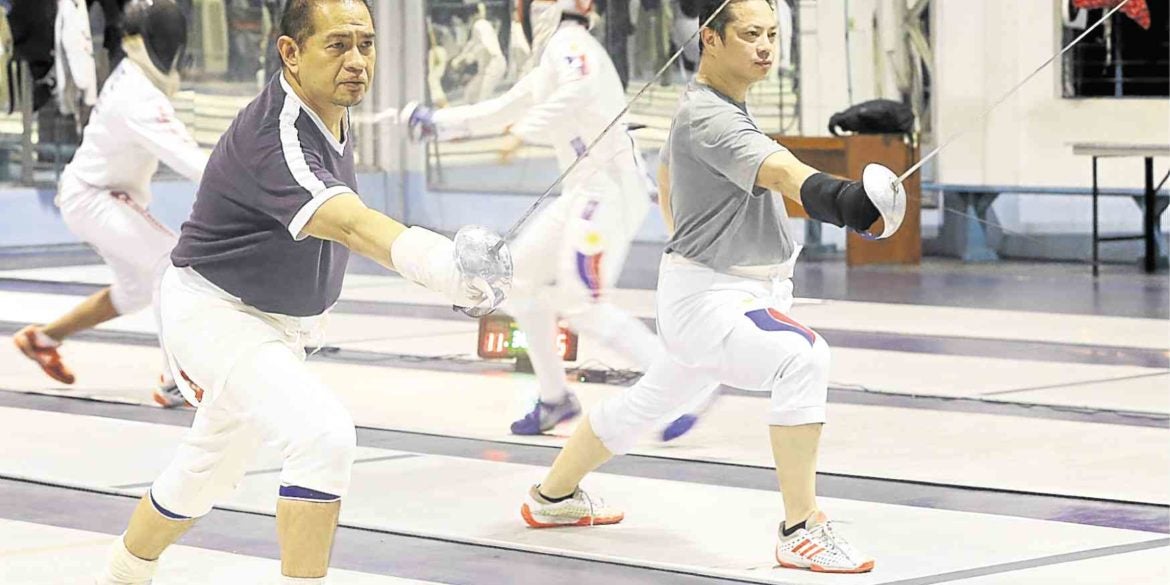 The well-known chef, also a karate sixth-degree black belter, is a SEA Games medalist in the combat sport

Before he became a chef and author of award-winning cookbooks, Eugenio “Gene” Gonzalez was a sportsman.

Gonzalez, one of the proponents of fine dining, is known for Café Ysabel, the restaurant in a turn-of-the-century house.

When not demonstrating cutting techniques, he hies off to PhilSports Arena in Pasig to hone his fencing skills.

His love of combat sports dates back to high school when he took up karate-do (the way of karate) and became a black belter in two years. He started teaching at age 18 and was a Metro Manila champion in a tournament. Gonzalez was a karate instructor at De La Salle University as he worked for his third-degree black belt.

At age 20, he set up a karate-do gym in his home, got married, and worked in a bank.

In 1982, he shifted careers by opening Café Ysabel while continuing his classes in the home gym and advanced his ranking. Gonzalez produced 35 black belters. In 1988, he passed on his gym to his students.

Gonzalez and his friends gathered the karate clubs to form the Philippine Karate Federation (PKF), a national body which can field participants in international events. As PKF’s board director and charter member, Gonzalez was conferred sixth-degree black belt.

Sometime ago, during the remodeling of his house, the scaffolding collapsed on him, leaving him with a dislocated left shoulder. He underwent surgery.

After rehabilitation, Gonzalez practiced his kata, choreographed karate movements, and engaged in strengthening exercises. After two years, he returned to kumite free-style fighting, but on a noncompetitive level.

Gonzalez started fencing lessons at the late age of 25. Nevertheless, he joined monthly competitions and eventually qualified for the national fencing team. His first international tournament was in Oceania in 1987.

He explained that there are various types of fencing. The foil, the lightest weapon, is used for thrusting the torso and the back of the opponent to score points.

Larger and heavier, the épée targets the whole body, but the fencer has to inflict greater impact to score a point. Both weapons are scored when the tip of their blade hits the opponent.

The saber is the heaviest weapon with a flat blade. The fencer scores points in any part of the blade, but targets only above the torso except the hands.

“The saber is the wildest weapon. For me, it was the closest to karate-do when I was nursing my left shoulder,” says Gonzalez.

In 1989, at age 31, he won the bronze medal at the Southeast Asian Games in Kuala Lumpur.

The 1995 SEA Games in Chiang Mai was his most dramatic moment. Win or lose, Gonzalez, then 37, was going to retire from the team.

It was time to give back. After retirement, he established the national women’s saber team and coached them for a year.

Today, Gonzalez is still active as chair of the National Sports Committee of Fencing, while actor and Ormoc mayor Richard Gomez is president.

Gonzalez is also girding for the 2019 Veteran Asian Championships in Taipei in August. The team will reunite former players of the national team who will compete in the saber event.

Unknown to many, Gonzalez is a prostate cancer survivor. A routine blood test in 2012 showed that his prostate-specific-antigen levels were extremely high.

Misdiagnosed with an inflammation, Gonzalez was given antibiotics, but his body was not responding.

A biopsy revealed that his cancer was in an advanced stage.

He underwent the conventional protocol. He has been in remission for six years now. It took him a while to regain his strength and stamina.

At 60, he continues to engage in sports. He occasionally meets up with former karate-do students who are now professionals, and practice kata and kumite.

In fencing, he plays mind games with the younger players. He recalls telling one opponent that he dated the opponent’s girlfriend. The opponent couldn’t focus and lost.

After the bout, Gonzalez told the other guy that he didn’t know his girlfriend.

“That was trash talking,” he says.

Fencing de-stresses him from work in the kitchen and the culinary school. “Fencing is good for physical conditioning,” he says. “When chefs and I do food tours, I have the stamina for long-distance walking to explore the place. The other chefs are upset because they can’t keep up with my pace.”—CONTRIBUTED