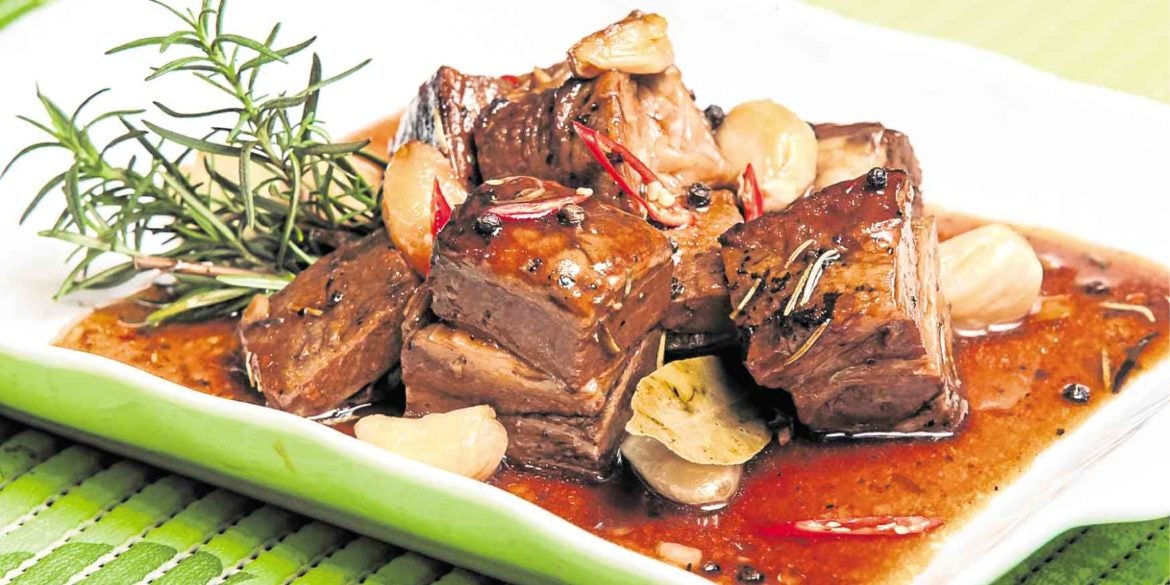 Julie Evangelista’s Spicy Rosemary Beef Adobo is an upgrade on the traditional adobo.

It’s made with huge chunks of beef and tons of garlic. It gets a tinge of sweetness from oyster sauce and honey.

The addition of rosemary is a refreshing twist—it provides a distinct, pungent flavor that blends well with the thickened dark soy sauce.

The slow process of stewing tenderizes the beef, and also preserves the natural juices of the meat.

“I use beef because it has a nice, firm texture,” says Evangelista. “I also add dried rosemary to change the flavor profile.”

Evangelista, who runs her own catering business (M Catering) and a restaurant (Tres), has been cooking this adobo for some time now. It’s a result of her constant experimentation.

As a Chinese, Evangelista grew up eating the humba-style adobo—no vinegar but with star anise and banana blossoms. To that recipe, she has also tried adding rock sugar to give sheen  to the meat skin.

Evangelista learned to cook from her mother, Chai Ha Lim, who used to hold private cooking classes for young Chinese housewives. While her mom taught lauriat-style of cooking, Evangelista watched and listened from the sidelines.

“My mom made her own asado siopao, machang, siomai, radish and pumpkin cakes,” she says. “Sometimes, I helped prepare and cut the veggies.”

Evangelista also got hooked on baking. Every summer, her mom enrolled her at Sylvia Reynoso’s baking school. Evangelista always ended at the top of the class after each course.

She finished Commerce at the University of Santo Tomas and took her MBA at the Ateneo de Manila University. She took a short course at the Center for Asian Culinary Studies under chef Gene Gonzalez.

“I wanted to learn the scientific and technical aspect of cooking,” says Evangelista, who’s married to a businessman who runs a direct-selling company. “I always wanted to have my own food business, ever since I was a young girl.”

Her dream came true after meeting chef Ed Quimson, who helped open her first restaurant, Tres, in 2010. After a year, they also opened the M Catering and Fine Foods.

“Chef Ed shared his ideas and Spanish-Filipino recipes with us. He set a high standard in the food preparation and service. He created a technical and systematic approach in the kitchen to make things a lot easier and fast.”

On Sundays, Evangelista prepares family Sunday lunch at home, where her children with their spouses and grandkids gather.

“They like the beef adobo as well as steaks and seafood,” she says.

Add vinegar and let it simmer uncovered for about 3-5 minutes. Adjust seasoning with pepper, honey and sili labuyo .

Cook until fork-tender. Do not overcook. Serve hot.