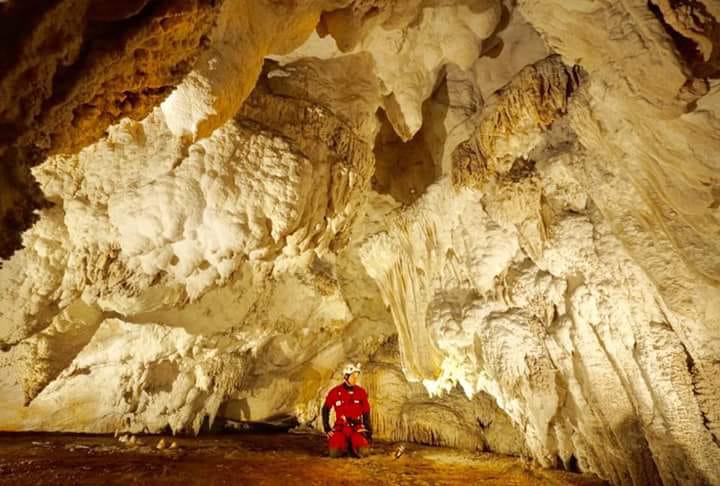 The vast interior of Phaka cave. Maed district official via The Vientiane Times

The cave, which is located on the Namfeuang River, has been explored by the Japanese over the past few months since March, an official at the Maed district Information, Culture and Tourism office, Mr Saydaen Sounlintha, told Vientiane Times yesterday.

The group will return to the cave to make further assessments and will prepare a report on their findings for presentation at an international meeting.

The cave is filled with water throughout the year and contains some fascinating stalactites. It is 120 meters high, about 400 meters wide, and about 8km long.

Konglor cave in Khammuan province is currently the largest known cave in Laos, measuring 7.5 km in length and being 90 meters wide and 100 meters high. Phaka cave is located 33km from the main town in Maed district and can only be accessed by boat. The river trip from the town to the cave is about 19km.

Those wanting to see the cave should contact Namfeuang village authorities, who will arrange for local residents to take you there. The Maed district Information, Culture and Tourism office is hoping to install facilities at the cave to make it more visitor-friendly, and is seeking funding.

Businesses interested in the project can call the district on phone number 023 513011, Mr Saydaen said.

Visitors to Maed district should not only see this cave but plan to explore other scenic attractions including the Moum cliff, and Huay Chan and Huay Khamleab waterfalls. And not far away is Vangvieng, which boasts a large number of visitor attractions and natural beauty, including Jang and Poukham caves, the blue lagoons, and Kaeng Nyui waterfall.

The Xong River offers kayaking, tubing, and speed-boating, and there are also zip-lines for the more adventurous.

Vientiane province has at least 32 hotels, 312 resorts and guesthouses, 273 restaurants and 41 entertainment venues.

The province is home to 171 officially designated nature-based attractions, 25 cultural sites and four places of historical interest, according to the 2018 Tourism Statistics report published by the Tourism Development Department, Ministry of Information, Culture and Tourism.