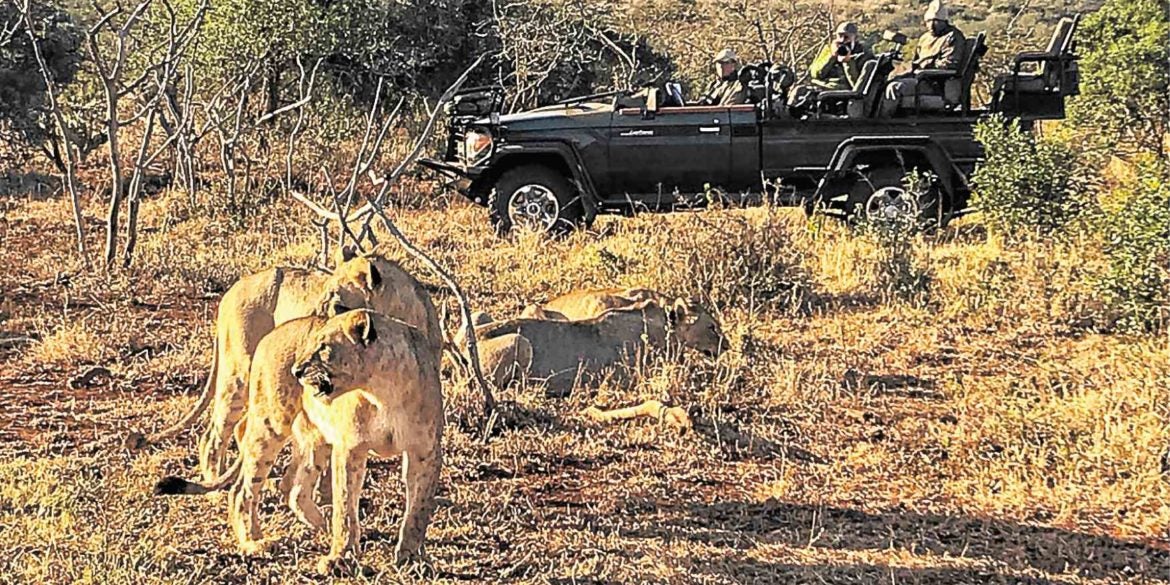 People have reservations about riding in open vehicles during game drives. But lions in game reserves do not associate humans with food, and they are naturally fearful of humans. Unless you run away, they will not see you as prey. —photos by Anne A. Jambora

Side by side with a pride of lions in South Africa

Our conversations were reduced to whispers. The majestic beasts were so close—too close—you could actually reach out and touch them if you were feeling a tad suicidal that morning

It was Day 2 of our game drive at the Thanda Private Game Reserve in KwaZulu-Natal, South Africa, and we were desperate to see lions. Of the Big Five, we had already seen rhinos, elephants and buffaloes on Day 1, so we were determined to see the notorious king of the jungle.

We had just witnessed a stunning sunrise. Riding in an open vehicle in the frigid South African winter morning (the meter read below 10 degrees Celsius), with nothing between us and the wild animals—and some poisonous trees and shrubs—was an experience we are likely to never forget in our lifetime.

The tiered seating (three rows) of the open-sided 4×4 vehicle guaranteed VIP seats for everyone—an exceptional, unobstructed view of the wildlife before us.

When on a safari in an open vehicle, you hear quite easily the rustling of the grass and treetops, and smells are easier to pick up, too.

We had been driving for more than 30 minutes, and I was beginning to get restless when our vehicle, with Vincent Hindson, our Thanda Private Game Reserve field guide behind the wheel, turned a corner and we came across three large lionesses slumped beneath a spiny shrub. They appeared bored, staring listlessly in the distance, soaking up the sun that chilly, misty morning.

“We are following the dirt road because at this hour, when everything is a little moist and wet, you are most likely to encounter lions on the road. Lions don’t like getting their paws wet so they will avoid stepping on the grass,” Hindson said. Hindson is a Frenchman who grew up and lives in South Africa. He also happens to be an award-winning photographer (IG @vdhindson).

At the sight of the lions, our vehicle immediately retreated, and Derick Myeni, our field tracker, got off his seat in front and moved to a safer location in the back. When encountering dangerous wild animals, such as lions and elephants, Hindson said it is important that they see us, the visitors, as one single unit. That way the animals view us as it would a large animal, and would most likely leave us alone.

A male African lion can reach up to 10 feet long and weigh 400 pounds—or more. If you fall out of the vehicle, inescapably distinguishing yourself apart from the “unit,” “you would make a delicious meal for the lions,” Hindson had warned. Guides do not carry handguns or stun guns, he said, so do not stand up or wave your hands in the air, and stay inconspicuous and camouflaged within the “unit.” (Some roads are rutted and bumpy, and the vehicle goes up and down 70-degree rugged angles, so we were told to buckle up or risk falling off the vehicle.)

When we made our way back to the bend, the lionesses had gotten up and began walking, this time striding with a purpose. We followed behind for a few minutes, keeping a respectable distance at first, and then we saw the pride—a group of more than a dozen lions, some walking and a few just waking up and yawning and stretching as our vehicle inched its way closer.

Soon we were driving side by side with the pride as they ambled toward wherever. The majestic beasts were so close—too close—you could actually reach out and touch them if you were feeling a tad suicidal that morning. Our conversations were reduced to whispers.

The pride was made up of mostly females, with a couple of young males whose manes had yet to grow into their full glory. A lion, by the way, is the only cat with a mane. Its function is believed to be to protect the neck during fights. But since lions are the only social felines—meaning, they live in groups—manes may be some form of a status symbol among them.

Scientists used to believe that prides, groups of a few to more than a dozen related females typically guarded by two or more males, were organized for hunting. Today, scientists think that this behavior, coupled with their complex community, is also shaped by one overarching force—its dreadful enemy, other lions.

It was exhilarating, and humbling, to ride next to these magnificent animals. It reminded us, quite brutally, of our own mortality.

It was also eye-opening to observe them in the wild, to see their little quirks. One lion, for instance, always walked just a few feet behind the pride, and had the habit of picking up twigs and sticks with its mouth and never letting go of the stick until it found another one.

Many have reservations about riding in open vehicles during game drives. And we can’t blame them, what with occasional headlines like, “Tourist killed in a game park.” The truth is, there is a difference between game parks and reserves like Thanda Private Game Reserve (@thandasafari).

Lions in parks are not entirely wild. Parks are a glorified zoo, providing big enough a space for wild animals to roam and for tourists to drive through in enclosed cars. These are lions kept in enclosures and raised in captivity. They have been handled and photographed by humans since they were cubs. Lions raised and fed by humans lose their natural fear of humans and learn to associate humans with food.

Wild lions in game reserves do not associate humans with food, and they are naturally fearful of humans. Unless you run away, these lions will not see you as prey. They also do not associate vehicles with humans or with food.

So, the next time you think some people are reckless or stupid for riding in open safari vehicles, remember the stark difference between the behavior and psyche of these animals.