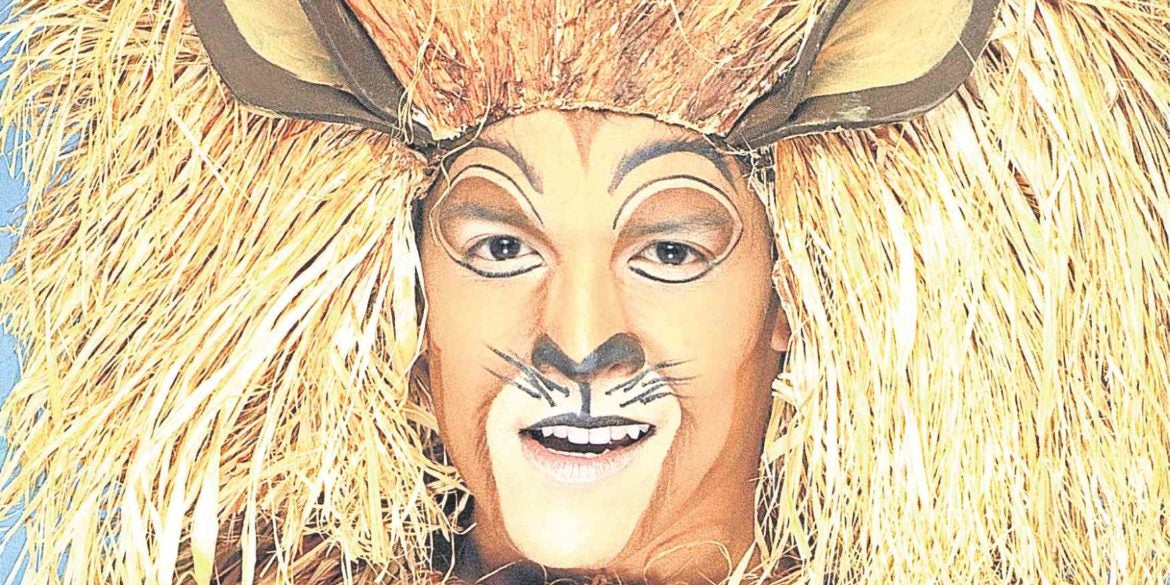 Markus Mann as Alex the Lion

As a young boy 20 years ago, Steven Conde saw onstage a talking and singing lion in Trumpets’ theatrical production of C.S. Lewis’ classic fantasy novel, “The Lion, The Witch and the Wardrobe.”

The experience captured his imagination and motivated him to get involved in the dramatic arts as an actor-director, and later give back to others with a similar inclination. These days, he’s living out a dream by directing “Madagascar: A Musical Adventure,” the first production of Atlantis Imaginarium Young Theatre (AIYT), designed to draw in children and teenagers.

AIYT is the new arm of Atlantis Theatrical Entertainment Group, which, in the past two decades, has become famous for staging Broadway and West End hits, like the recent “Beautiful: The Carole King Musical” and “Angels in America: Millennium Approaches.”

Interestingly for Conde, at the center of this new adventure is another lion, Alex (Markus Mann), who wants to escape his cozy cave to explore the bigger world beyond.

The king of New York’s Central Park Zoo is joined by a band of other animals: Marty the Zebra (Nelsito Gomez), Gloria the Hippo (Sarah Facuri), and Melman the Giraffe (Altair Alonso).

The quartet’s escapades eventually land them in the titular island of Madagascar which is ruled by the warlike, if wacky, King Julien (George Schulze).

Those who’ve seen the film may be familiar with the plot, but can expect a different treatment.

According to Conde, the book by Kevin del Aguila and original music and lyrics by George Noriega and Joel Someillan crystallized all the storytelling elements in the film into a comparatively short, but breathlessly engaging 60 minutes.

“This is a musical, the movie was not,” Conde points out. “A lot of the songs may not be popular, but they will have high recall. There will be a lot of dancing—we wouldn’t be surprised if the kiddie audience joins in the end!”

Not all in the menagerie will be brought to life by actors. Mischievous monkeys and ship-stealing penguins will be recreated in colorful, life-like forms by Puppet Theater Manila.

Conde adds that GA Fallarme’s projection design and Lawyn Cruz’s set design will be visually stimulating, yet leave enough for the audience’s creative minds to fill in the blanks.

“Imaginarium means a lab for the imagination and using your imagination is a huge part in watching theater,” says Conde. “Kids today are smart. The less you spoon-feed them, the more engrossed they are. In ‘Madagascar,’ they are always asking, ‘What’s going to happen next?’”

Conde’s own passion for the theater grew after his first experience of watching musical theater as a child. Growing up in a Chinese high school that emphasized business, the sciences, and math, he realized that he lacked exposure to the arts. “Maybe it could have made me well-rounded as a young boy. I missed out on a lot of opportunities when I was young,” he says.

AIYT sees to it that today’s youngsters are not deprived of experiencing the arts. Its productions pave the way for aspiring theater performers to work with veteran artists. They come from Atlantis’ drama workshops, which are conducted three times a year: in January, July, and summer vacation.

Conde is one of 20 faculty members who teach drama and musical theater to an average of 25 students per class.

“We’re not limited to teenagers and adults,” Conde says enthusiastically. “Our students’ ages range from 16 to 54 years old. We’ve had a surge of corporate people, too, with occupations like accountants and aeronautical engineers.

“They want to explore theater, and take a breather from their day jobs. You could see their dedication: they go straight from their work to our workshops, do our evening classes, which are for adults, and wake up early for the office.”

“Madagascar’s” message may resonate with adults as well. Conde sums it up: “The musical is about friendship and brotherhood. A carnivore and a herbivore end up as a team. Life is about relationships—no matter who you are, what’s important is who you’re with.” —CONTRIBUTED