‘If He Doesn’t See Your Face’: Actors make it larger than it is | Inquirer Lifestyle ❮ ❯ 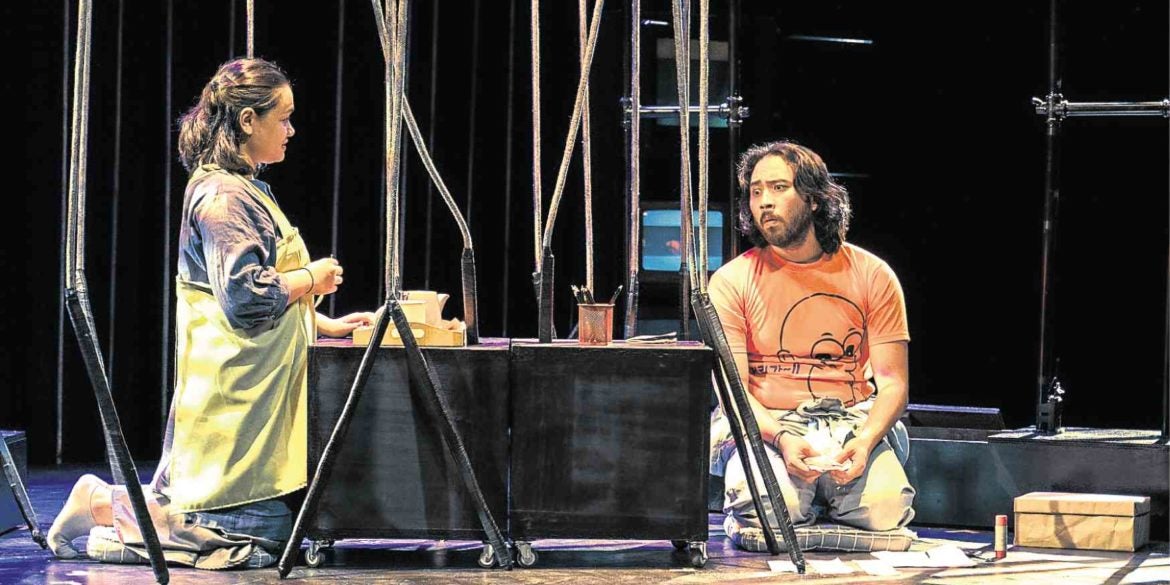 ‘If He Doesn’t See Your Face’: Actors make it larger than it is

The program for “If He Doesn’t See Your Face” describes the play as a product of a “Sisyphean-like struggle” to interpret Suzue Toshiro’s original text. Using Christy Scriba’s English translation, the production directed by Ricardo Abad is mostly able to mask the signs of this struggle through creative set arrangement and wonderful chemistry between its two actors.

But it also frequently pushes against a self-imposed ceiling. It isn’t willing to sacrifice its own smallness to better explore the larger ideas within the script.

Set almost entirely in a prison’s visiting room, the play follows the increasingly anxious Yasuyo (Delphine Buencamino) checking in on her husband, Tatsuya (Brian Sy), after he is imprisoned for theft for the fourth time.

Abad also gets a lot of mileage out of the production’s minimalist design. In the second act, he has the actors literally move the walls that separate them into different configurations. The characters remain separated, of course—never once making physical contact, no matter how they try to navigate around their obstacles.

And even without all these formal tricks, Abad clearly knows how to choreograph two characters who are essentially just looking at each other for two hours. They may be sitting in place, but they cover quite a bit of emotional territory.

Unfortunately, when the script opens up to the world outside the central relationship (a world that questions justice, gender roles and impersonal society), the production hesitates to open up alongside it. “If He Doesn’t See Your Face” is clearly devoted to the style it’s chosen for itself, but its execution doesn’t allow the material to truly spread its wings.

Apart from the aforementioned security cameras and old commercials, the outside world never seems to cast a shadow over the characters, despite the fact that they are unquestionably subject to its gaze. The play’s little tricks ultimately aren’t enough.

The smallness of the play also can’t disguise the somewhat uneven treatment of its characters. While Tatsuya is given ample time to explain his entire psychological history, Yasuyo doesn’t have that same luxury. She isn’t weak or lacking in agency, but when she gets the spotlight to herself, the playwright’s words limit her expression to nervous ramblings. And when the play reaches its resolution, the emotions are somewhat unearned—in no small part due to the unevenness of the characterizations.

Still, it may be enough that the production even hints at an entire range of ideas beyond the prison setting.

The dialogue is playful and dynamic enough to make up for the script’s missteps. Seemingly inconsequential details like the use of honorific titles, and the holes in a pair of children’s socks, suddenly become sources of deep insecurity.

If there’s anything the play does truly well, it’s portraying how difficult it can be to untangle two lives bound in matrimony.

How fortunate, then, for the material to land in the hands of Buencamino and Sy, both of whom can barely keep their characters’ anguish and frustration hidden behind jokes and pleasantries. Their work is an excellent showcase of synergy between actors—each of them parrying every remark and daring the other to break.

“If He Doesn’t See Your Face” may not offer as much as it probably should, but in the moment, the actors help make it seem much larger than it really is. —CONTRIBUTED