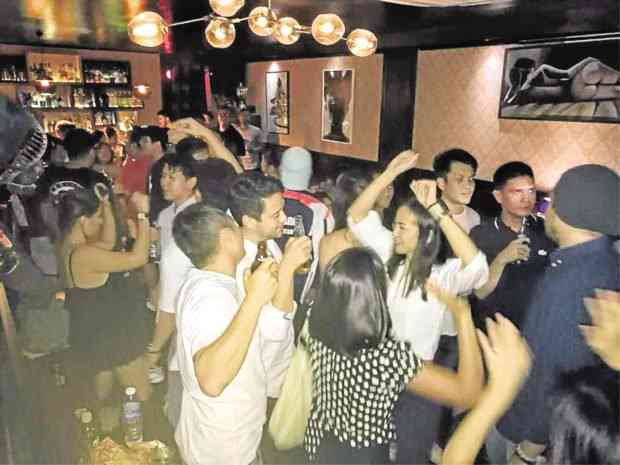 A typical weekend scene at NoKal, one of the most crowded clubs in Poblacion, Makati —POCHOLO CONCEPCION

Beware of theft gang in Poblacion

The nightlife crowd in Poblacion, Makati, is advised to be cautious even while having fun—because thieves have descended on the area.

On July 27, broadcast journalist Veronica Baluyut-Jimenez posted on her Facebook page an incident involving her daughter, who lost her iPhone to a pickpocket at NoKal, one of the most crowded clubs in the trendy neighborhood.

CCTV footage from NoKal led to the identification of a suspect, who, when arrested by police, confessed to operating in Poblacion with accomplices.

Jimenez said that the suspect, while under detention, bragged to her daughter about having police connections. Worse, the police officer on duty at Makati’s Sub-Station 6 was said to have discouraged Jimenez’s daughter against filing a case because “the syndicate” will just bail out the suspect.

On Aug. 2, NoKal managing partner Marco Viray phoned me to relay the good news that the suspect, Maria Lourdes Habitan, has undergone inquest and is now detained at Sub-Station 6 after confessing to the theft.

A few days prior, Viray posted on his own Facebook page a letter from NoKal assuring patrons of “efforts to remedy the situation and avoid future problems,” imposing “stricter protocols” for security and offering assistance to victims (another girl was said to have lost her wallet) via filing cases against suspects.

The lesson is, always mind your valuables in crowded places—not just in NoKal but anywhere.

Singer and The Good Guys bar owner Joey San Andres says he’s flattered by Nonoy Zuñiga’s offer to present him in a show on Aug. 9 and 16 at Johnny B. Good in Glorietta 3, Makati.

At first, San Andres says he thought Zuñiga wanted to do a back-to-back show. But he was surprised when Zuñiga said, “No, I will present you” as Joey San Andres, and maybe sing a few numbers as a guest.

San Andres recalls that he and Zuñiga first met as choir members at Sacred Heart Parish in Quezon City, though from different batches: “Nonoy was from an older batch and I was with his younger brother Zoey.

Before joining Chorus Gold, San Andres was in the band 8th of September, whose keyboardist, Egay Gonzales, would later recruit him to the last batch of Music Making Company.

When San Andres was doing good as owner of the bar JSA at Harbor Square in the CCP complex, he was also pursuing his love of jazz-R&B with his own band, Joey’s Mailbox.

When he opened the steaks and music place The Good Guys with Al Tantay and Edgar Mortiz, among other partners, Joey’s Mailbox took a regular slot. It performs Sunday nights.

His association with Mortiz and Tantay led to acting stints on TV and film. He’s in the cast of a comedy flick, directed by Tantay and produced by Viva, opening in September.