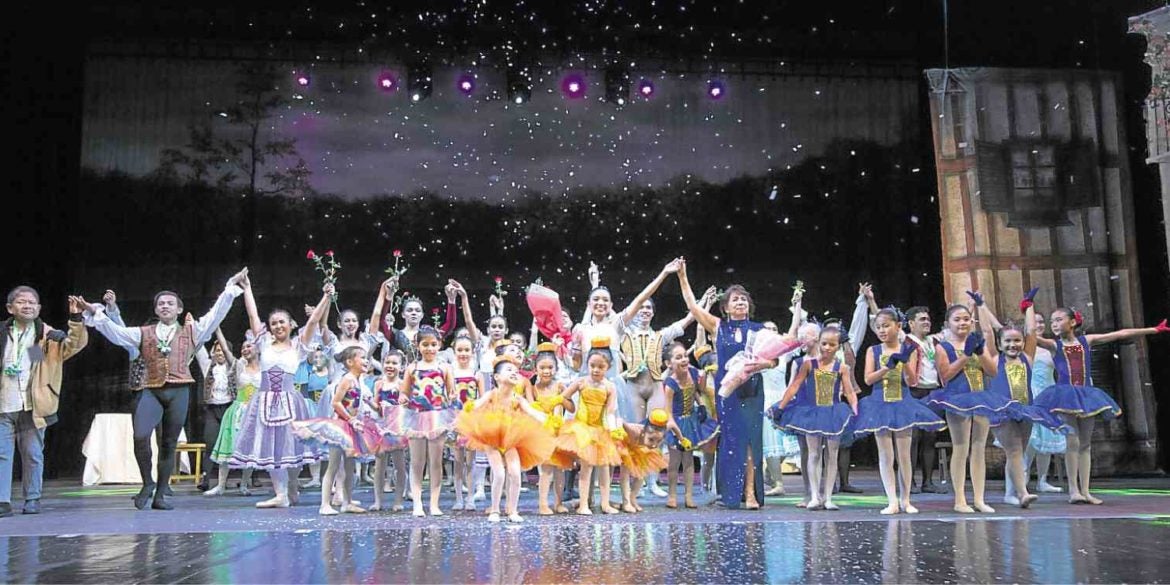 Leading ballet teacher Malen Claravall (in blue) acknowledges the rousing ovation at curtain call, with her students at Claravall School of Dance, from both Parañaque and British School branches.

Students at Claravall School of Dance interpret a wide music spectrum, from The Beatles to Queen’s ‘Bohemian Rhapsody’

This year’s student recital of of the Claravall School of Dance outdid previous presentations from both its Parañaque and British School branches.

Over a thousand people— parents and relatives of the dancers, ballet aficionados, and children from families in outreach programs of prayer groups and schools—came to watch the show “Beauty or the Beast and Other Dances” at Solaire Theater.

A two-part recital consisting of solos, group dances and a narrative ballet, the show is a creative take on the 18th-century French fairy tale “Beauty and the Beast.”

From stage design, choice of music score and lighting, to selection and training of dancers and interpretation, the performance was a wonderful experience.

Then a group of older students danced to a Beatles medley. Some people in the audience were seen singing along to “A Hard Day’s Night,” “Eleanor Rigby,” “Here Comes the Sun” and John Lennon’s “Imagine.”

Highlighting Part I was a mesmerizing interpretation of Queen’s “Bohemian Rhapsody.”

All students from various grade levels danced with confidence. Even the first-time performers knew how to pick up when they fell slightly behind.

Part II featured a revised version of “Beauty and the Beast.” Guided by the theme that all humans are by nature blessed with beauty within, but also have a beastly side, the show imparted some life lessons.

All the characters grew into their roles. Beauty was portrayed by 12-year-old Rhiannon Malpass and 17-year-old Clarys Calvo as simple, unassuming girls who would rather stay at home reading than join the happy-go-lucky villagers.

Adam (who would transform as the Beast) was portrayed by Ivan Yson. He was not popular as the proud and confident Gaston, played by Peter Lloyd San Juan, but Adam had deep affection for Beauty.

Adam and Gaston became rivals as they pursued Beauty.

Adam tried to keep his cool, but when things went awry, he showed a bad temper and vented his anger on others.

Gaston realized the futility of the rivalry and begged for forgiveness.

The old woman Adam vented his anger on turned out to be an Enchantress, who was unforgiving and full of hatred, and put everyone under her spell. But Beauty’s love for Adam saved everyone from doom.

The audience cheered when Adam was rescued.

As the applause went on by the recital’s end, the school’s head, Malen Claravall, beamed with pride while congratulating her students.—CONTRIBUTED