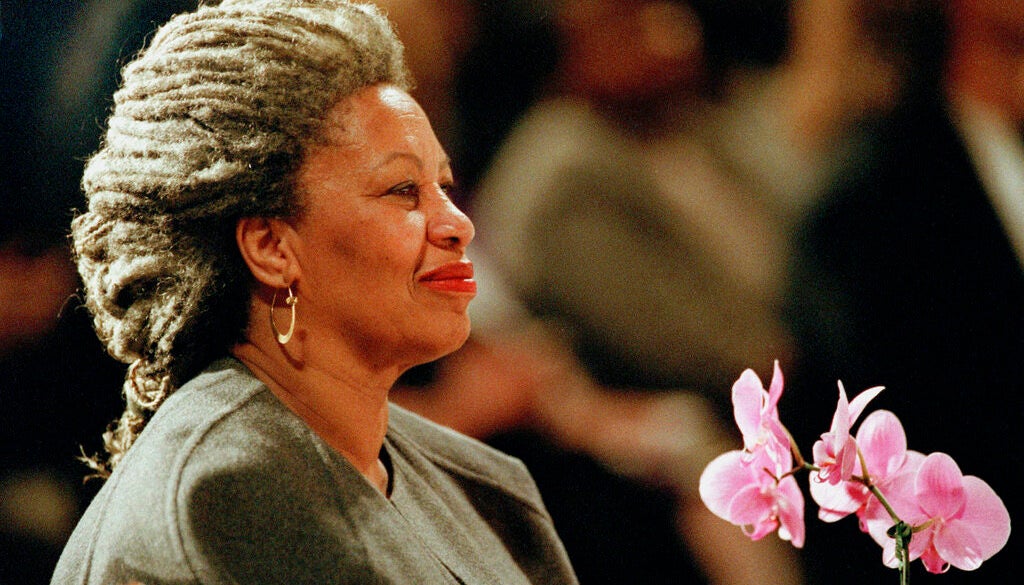 FILE - In this April 5, 1994 file photo, Toni Morrison as she holds an orchid at the Cathedral of St. John the Divine in New York. The Nobel Prize-winning author has died. Publisher Alfred A. Knopf says Morrison died Monday, Aug. 5, 2019 at Montefiore Medical Center in New York. She was 88. (AP Photo/Kathy Willens, File)

“If there’s a book that you want to read, but it hasn’t been written yet, then you must write it,” from a 1981 speech to the Ohio Arts Council.

“There is a loneliness that can be rocked. Arms crossed, knees drawn up, holding, holding on, this motion, unlike a ship’s, smooths and contains the rocker. It’s an inside kind — wrapped tight like skin. Then there is the loneliness that roams. No rocking can hold it down. It is alive. On its own. A dry and spreading thing that makes the sound of one’s own feet going seem to come from a far-off place,” from her novel “Beloved,” winner of the Pulitzer Prize in 1988.

“Our past is bleak. Our future dim. But I am not reasonable. A reasonable man adjusts to his environment. An unreasonable man does not. All progress, therefore, depends on the unreasonable man. I prefer not to adjust to my environment. I refuse the prison of ‘I’ and choose the open spaces of ‘we’,” from her 2019 book “The Source of Self-Regard: Selected Essays, Speeches, and Meditations.”

“What was I thinking of? How could I have imagined him so poorly? Not noticed the hurt that was not linked to the color of his skin, or the blood that beat beneath it. But to some other thing that longed for authenticity, for a right to be in this place, effortlessly without needing to acquire a false face, a laughless grin, a talking posture,” from her 1992 novel “Jazz.”

“It is the language that drinks blood, laps vulnerabilities, tucks its fascist boots under crinolines of respectability and patriotism as it moves relentlessly toward the bottom line and the bottomed-out mind. Sexist language, racist language, theistic language—all are typical of the policing languages of mastery, and cannot, do not permit new knowledge or encourage the mutual exchange of ideas,” from her 1993 Nobel Prize lecture.

“If you surrender to the air, you could ride it,” the final words from her 1977 novel “Song of Solomon.” NVG