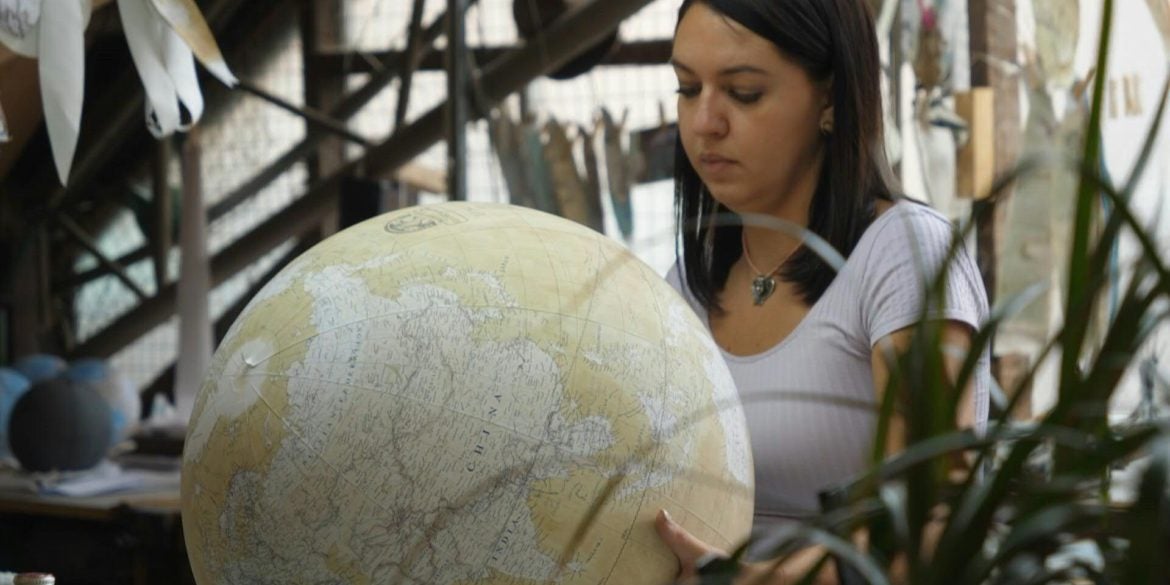 In 2008, Peter Bellerby set out to buy his father a high quality handmade globe as an 80th birthday present.

When he could not find one, the Briton decided to make it himself — and, in the process, catapulted himself into a new profession.

Just over a decade later, his company Bellerby and Co claims to be the finest globemaker in the world, selling tailor-made products to an array of international buyers.

They include heads of state and big companies as well as everyday people wanting to mark a special occasion.

“There’s no one really making bespoke globes like this, with the involvement we have with customers,” Bellerby told AFP, during a tour of his 4,000-square-foot (370-square-metre) manufacturing studio on a quiet London backstreet.

It was littered with half-finished globes as his team of two dozen illustrators, painters, cartographers, constructors, engravers and woodworkers toiled beneath strips of paper drying on washing lines overhead.

“I’m really proud of where we’ve got to.”

The scale of the operation contrasts with its humble beginnings when Bellerby, an ex-property developer among other former professions, began making just a handful of globes each year in a small shop around the corner.

Now the business turns out around 600 globes annually — some destined to sit in grand mansions and aboard yachts.

Bellerby spent much of the first year or two of the venture perfecting how to make his globes, largely by trial and error, before passing on the know-how.

Trainees will toil for around a year learning the craft before being trusted to work on finishing products.

The creative process starts by sourcing composite or resin spheres, which form the basis of the globes, from another company — the only stage not done in-house.

Illustrators and cartographers work with clients — over months, sometimes years — to decide what will appear on its surface, with requests for everything from animals to ocean liners on the maps.

Wide-format printers, using ink guaranteed for 80 to 200 years, are used to relay the basic geographical outlines chosen onto special paper, whose properties allow it to be dunked in water and then stretched.

Once printed, the paper is cut into precise shapes called gores, then painted by hand using watercolours.

After the paper is delicately applied to the globe, it undergoes further rounds of watercolour painting before it is finally sealed with either a gloss or a matte finish.

“The really difficult process to work out is how to stretch a piece of paper, that just wants to rip and tear, over a sphere,” Bellerby said.

The completed globe is next paired with a base, traditionally a wooden axis on a table but now increasingly an alternative to this with roller bearings, which allow the whole globe to rotate and be more accessible.

The entire process — which can take from just weeks to as long as 18 months, depending on the size — is documented on the firm’s Instagram account so customers can see their orders progress.

Machines are avoided as much as possible.

Bellerby’s biggest offerings — 50 inches (125 centimetres) in diameter — were inspired by 48-inch globes made by the US Army during World War II for president Franklin Roosevelt and British prime minister Winston Churchill.

Bellerby has vowed to make just 40 of these “Churchill globes”, and has already completed 17, turning out a couple a year.

“It’s probably the largest printed globe ever made,” he said, noting that they differ from so-called manuscript globes — which have blank paper attached to them ready to be painted — and another variant which sees oil paints applied directly onto the sphere.

Bellerby has learned that mapping can present a minefield of political grievances and sensitivities, and worse.

Indian customs officials temporarily impounded one globe over how their country’s border with Pakistan was depicted, while several customers have asked for Israel not to be included on their map — which Bellerby said he politely declined to do.

He also must keep abreast of countries changing their names, such as Swaziland becoming eSwatini last year.

“The problem with cartography is each country has its own idea of the world,” Bellerby said.