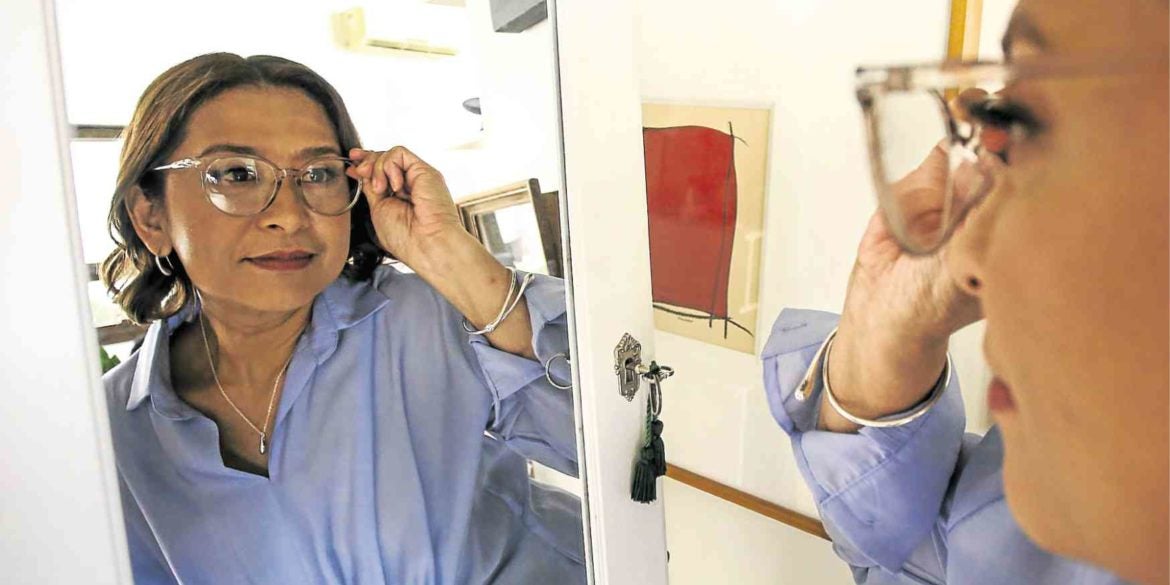 After a solid broadcasting career, she collaborates on antiradiation computer eyewear and style line

When Ces Drilon decided to retire from television a few years ago, the seasoned news anchor and broadcast journalist set out to try her hand at farming. Recently, however, she found herself lending her name to a brand of antiradiation computer eyewear.

The irony isn’t lost on Drilon. “By the time I hit 50, I wasn’t even wearing eyeglasses yet. But maybe about three years later, I was already in denial—I would take photos of the bottom of a lipstick because I couldn’t read the text,” she recalls with a hearty laugh.

Early this year, an entrepreneur friend of her third son, Gian, made her an offer: Would she lend her name to a line of affordable computer eyewear?

Isaac Saliendra, 25, has a thriving eyewear brand called Peculiar, sold on Lazada, and he wanted to collaborate with Drilon.

“Some millennials probably don’t know of her, but I did, because I have followed her story,” Saliendra says of Drilon. “I was scared and intimidated at first… She’s not just an influencer; it’s a partnership.”

Drilon, however, had misgivings about the computer-eyewear niche, so she did her research on the harmful effects of the gadgets’ blue light or UV rays on the eyes.

But “I really believe in the future of e-commerce,” she says. She had heard a talk by the country manager of Google, where “he said that we’ve barely scratched the surface of e-commerce in the Philippines.”

She also saw the opportunity in Saliendra’s proposal. The young businessman is “so bullish, but the business had to fit me… Panindigan na nga! I decided to embrace eyewear!”

Ces Style X Peculiar, a curated selection of eyewear designed to protect one from eyestrain caused by long exposure to blue light, was born in May.

Drilon handpicked the styles, down to the packaging, and is responsible for the branding. They retail from P299 to P499.

Her Ces Style brand also has a fashion line, with handbags, accessories and watches, all sold on Lazada.
She plans to expand possibly to home accessories or even pet items—Drilon and youngest son Andre live with five Shiba Inus.

Drilon isn’t new to entrepreneurship. She used to run a shop-cum-art gallery called Mag:Net, which sold magazines and accessories, apart from art. “We were ahead of the boom in the art business. Noon walang gustong bumili, ngayon nagmamakaawa ka sa gallery.”

Drilon is discovering that online retail is a whole other animal, with complex algorithms and analytics—she and her young team that includes Andre are constantly checking stats, growing their social media presence and creating ways to drive traffic to the Ces Style e-store on Lazada. “The challenge is in making people know you’re there,” she says.

The world of algorithms and stats is a milieu she has become familiar with since she took on the role of executive editor of ANCX, the lifestyle site of ABS-CBN News Channel (ANC).

She opted for early retirement in 2015 after, she admits candidly, getting passed over for an anchor post—which she saw as a sign to move on. She and partner Ricky Carandang, the former Malacañang communications secretary, opted to go into farming. Carandang had bought some farmland in Batangas.

(Leading to that time, her work situation had gotten somewhat tenuous, says Drilon. “When Ricky joined government, the stories I could do became limited. Even when he left government, there were still… he was associated with a certain camp and no matter what I did, there were so many innuendoes.”)

It was then that she got the call to head the lifestyle ecosystem of ABS-CBN News, which was expanding its digital platform. Her role was initially lifestyle content acquisition head, but she’s now focused on the male market for ANCX. She was still an anchor of “Bandila” at the time, a post she had to give up eventually when her plate got too full.

Drilon’s business ventures come at a time when there are no more ethical restrictions. “I’ve left newscasting, so there’s no issue in that respect. I’m a consultant, no longer a regular employee,” she says.

“I have no regrets about leaving television. I’m still doing news, just not hard news. People have this idea that lifestyle is all fluff. No! It’s so challenging. Our very first story was the boceto of Luna. Digital is also something totally new. It’s nice to leave your comfort zone.”

But while she’s exploring the joys and intricacies of e-commerce, she and Carandang continue to be “weekend farmers.” They plant moringa (malunggay), classified as a superfood, for export.

“Maybe in a few years, we’ll do farming full time,” she says.