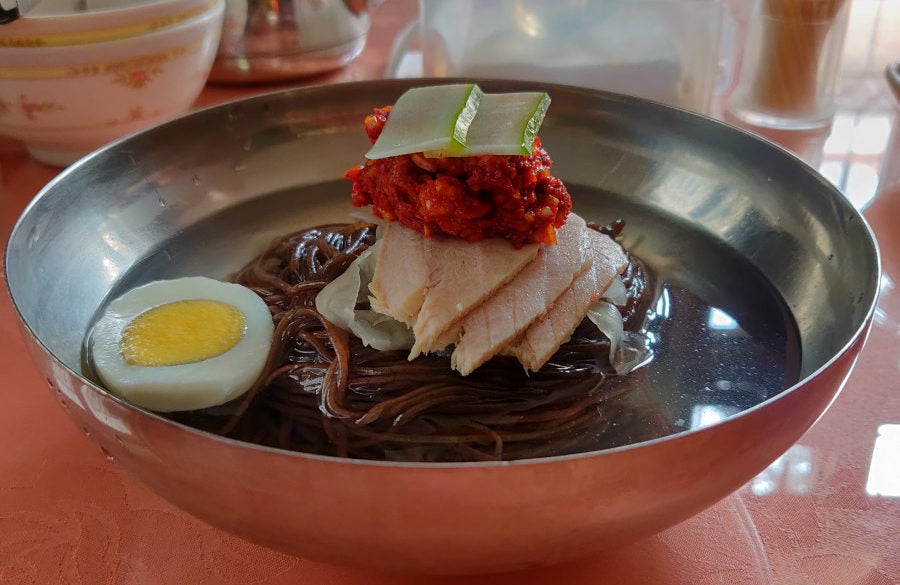 KATHMANDU — It was a heart-sinking feeling, rolling up to the quiet and empty lot next to Hotel Yak & Yeti, only to find Pyongyang Arirang, the country’s only North Korean restaurant, had closed. The dusty staircase leading to the restaurant was unsullied by human traffic, the restaurant’s sign had been removed, and the doors were firmly shut. A taxi driver, sitting at the gates of the old restaurant, said it had closed under sketchy circumstances, given the police raids last year following an allegation of illegal workers. He then revealed some news I could use: Pyongyang Arirang had moved to the other side of town—to Jhamsikhel.

A little sleuthing revealed Pyongyang Arirang was not Kathmandu’s first North Korean restaurant. Its predecessor, Pyongyang Okryu-Gwan, closed in 2011 after its manager absconded to South Korea. Buoyed by North Korea’s persistence, I tracked down the restaurant a couple of months later. It had defected from Paryatak Marg to Sanepa, where Sister’s Cafe and Beauty once was, close to The Yellow House.

Why seek out the restaurant, you ask? North Korea is a recondite state, obscure and cut off from the world by its own volition, and international political censuring. Nepal is lucky, if that’s the word, to get a taste. Getting a glimpse into what goes on north of the 38th parallel is a rarity—even if it’s just in the form of food.

The new North Korean restaurant has a new name: Himalayan Soje Restaurant. While Pyongyang Arirang might have been reincarnated with a less obvious moniker, the faded peach tablecloths and wooden chairs have remained, as has the restaurant’s signature brand of suspicious absurdity. Why is there a Christmas tree in the dining room? Why is a stuffed Santa Claus sitting next to the booze in the bar? Why is there a painting of pandas on the wall? North Korea doesn’t celebrate Christmas, and it certainly doesn’t have any of China’s black and white bears.

There are more questions than answers at Himalayan Soje, and perhaps that’s what the people running the place want. The country is not widely known for its cuisine—though its previous leader was notorious for being an expensive eater—and has rather made headlines for its famines and poverty. Globally there are some 100 restaurants like this one, many of which are reportedly engaged in money laundering. They’re a place where nationals are sent to work all year, without breaks, to make money for their government. So, while there are plenty of questions about Himalayan Soje, the one that triggers most curiosity is: what forms of gastronomical espionage does it serve?

A warm welcome breaks eeriness of the entry into the dormant dining room—it’s in Nepali, no less—the service is as assertive as the “no photography” sign on the wall. The food, it turns out, looks pretty good. There are rice cakes, bibimbap, gimbap, jellyfish salad, fried whole fish, and several varieties of kimchi. It’s not cheap, but not oppressively pricey, and the menu is exhaustive.

Doting recommendations come in the form of steamed chicken wings, chilli chicken, and other less-than-authentic Korean dishes. Following one assertive suggestion, and choosing from among more authentic-looking dishes, plates arrive slowly, but only after a deafening generator whirrs into life.

Consuming the quiet space during the wait, the restaurant’s decorative taste comes into question. The benighted might expect eagle-eyed Orwellian servers looking over diners’ every move, but the reality is a feigned desertion towards comfort and warmth. Hammer and sickle do not take the place of cutlery, there’s no bark or grass on the menu—rather, it is closer to a faded Chinese diner in Los Angeles. Restaurants of Himalayan Soje’s ilk have stages for cultural performances and karaoke, but this one is far more restrained. It’s more covert and understated.

Not long after impressing the server with my knowledge of blood sausage—Koreans call theirs sundae—she asserts that the dish’s constitution is entirely porcine. Sundae’s prerequisite ingredient is blood, but the rest is up to the cook. While fancier places might use noodles to texturally challenge the uninitiated, fat to add flavor, or meat to seem luxurious, this version, following an assumed North Korean no-frills attitude, seems to be just rice, blood and guts. The soft innards are metallic and rich, playing a single note, while the textural variety is largely nonexistent, save for the chewy intestinal border. That is, until the sausage slices are dunked until sodden in the accompanying sauce, which is pronounced with vinegar, soy and plenty of chilli—it pricks the palate with pins and needles.

What follows is the chicken chilli, the server’s recommendation, a familiar moniker for a somewhat limited flavor profile. This plate is not sullied by ketchup, rather a vinegary orange dousing. It becomes more apparent each bite where the spice is coming from: American Garden hot sauce. The result is essentially a Buffalo chicken stir-fry. The flavor is not insulting, rather bemusing—it’s spicy, acetic, and whole fried dried chilies add extra punch. Green pepper and carrot triangles lend textural interest, while the cornflour-doused chicken is slightly crisp. What cornflour does, as East Asian nations attest, is it thickens what would likely be a very watery sauce. Perhaps it’s a gastronomical olive branch?

Between the Korean sausage and the Buffalo chicken, the server does her best to scold our table for photo-taking. Be warned, this is not an Instagram friendly restaurant.

So while a handsome bibimbap arrives wearing a fried egg beret, the server quickly guillotines the yolk, massacring it into a claret mix of kimchi, pork, carrot, and other nondescripts. Kimchi dominates the flavor, with sliced pork, julienned carrot and scallion chiffonade, but the broken yolk solidifies into the mix, turning the rice from pleasantly glue-like into a clotty stucco. But all together, it’s a pleasant dish, begging to shine on a cold grey day.

Finally comes the raengmyon, a steel bowl with noodles weaved into a bun, topped with daikon, a flop of pork dealt into a small pile, an ice-cream scoop’s worth of what could either be gochujang or macerated kimchi, and two small sliders of cucumber. A lone half of a grey over-boiled egg bobs in the noodle-boiling water.

Then, in a bizarre turn of events, the server stops to allow a photo. The tower of comestibles does look delightfully odd, towering in a metal bowl. With a trifecta of home-made mustard, soy and vinegar waiting to be mixed post-shoot, it doesn’t take long for the dish to look like vermin-filled muddy water. But the vinegar renders the mustard sweet, rather than tear-inducing, while the soy adds necessary salinity to bring out some of the flavor. The egg tastes unnecessary, the pork is rather bland, but the daikon adds a level of heat to the cold noodle dish.

The noodles in this dish, the server says, are made of “brown maida” referring to the inclusion of buckwheat. The texture, however, screams sweet potato noodles. Slimy and slightly sweet, they have an odd crunch—almost like eating a koosh ball. It’s a challenging dish, but likely, the most authentic to touch the table—beware thukpa lovers, this soup is tepid, too.

Himalayan Soje is far less challenging than one would think. While North Korean restaurants around the world apparently reek of gaudiness, this one is quiet and restrained. Perhaps Himalayan Soje is trying to stay low-key after last year’s debacle, or maybe there’s some bigger skullduggery going on behind that kitchen.