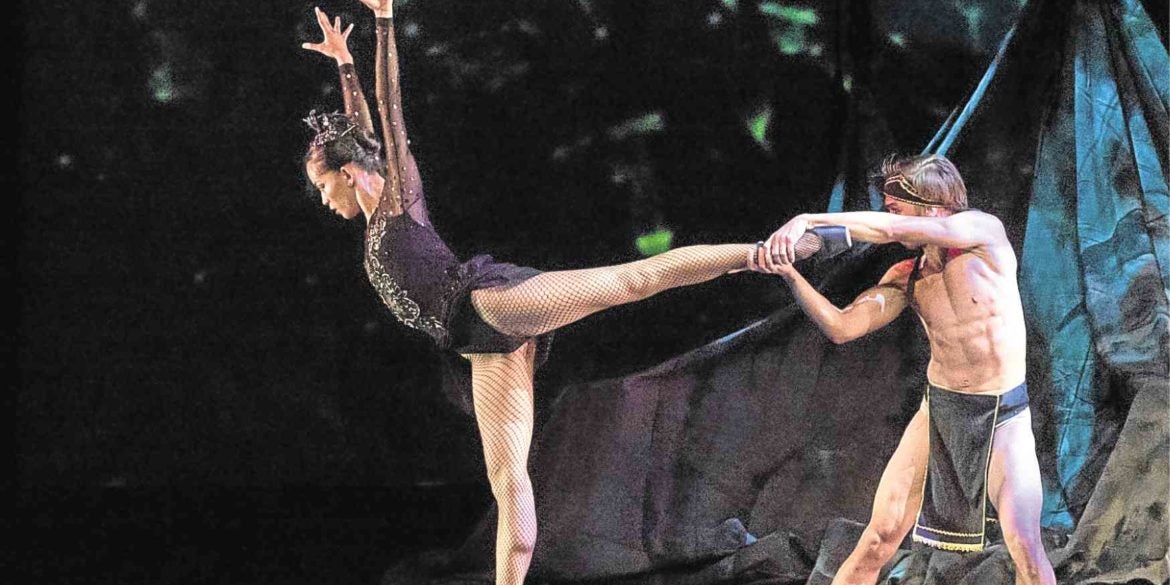 Ballet is based on Jose Garcia Villa’s famous short story.

PBT’s ‘Mir-I-Nisa’ is a colorful spectacle

Touted as a milestone, “Mir-I-Nisa” is the first-ever three-act ballet based on a story by National Artist for Literature Jose Garcia Villa. The ballet premiered during the inaugural season of the Cultural Center of the Philippines (CCP) in 1969.

In a pearl-diving community in Mindanao, the noble Tasmi and the arrogant Achmed compete for the love of Mir-I-Nisa, the daughter of Sultan Uka. Datu Uka throws a black pearl into the sea. The man who recovers it will marry Mir-I-Nisa.

During the search, Tasmi is harassed by sea creatures and swims back for safety. On the other hand, Achmed reaches the Kingdom of the Pearls and encounters the Pink Pearl, the Blue Pearl and the White Pearl, the Queen of the Pearl Kingdom. Finally, Achmed lures the Black Pearl.

Back in the sultanate, Tasmi feels humiliated for his botched mission. To Mir-I-Nisa’s disappointment, Achmed brings the pearl. However, at the wedding ceremony, Mir-I-Nisa is surprised to find Tasmi as her groom. Through mime, her father explains that he didn’t throw pearl into the waters—but salt. Because of Tasmi’s honesty, Sultan Uka has chosen him as his son-in-law.

The original choreography, characterized by angularity and flexed hands, was retained. But it was performed by a generation of dancers with higher extensions, buoyant jumps and stable multiple pirouettes.

To appeal to a modern audience, Jaynario made the Act 1 underworld more exotic and thrilling.

Act 2 was accompanied by a live kulintang ensemble, performed by Philippine Barangay Folk Dance Troupe Rondalla. Its mellifluous music was a foil to the pyrotechnical series of lifts, twirling tosses in the air and partnering manoeuvres with standing splits on points.

As in Russian classics which incorporate character dancing in court entertainments, “Mir-I-Nisa” was injected with the Muslim scarf-and-fan dances by women and a celebratory dance by men during the wedding scene. The guest artists, the University of the East Dance Troupe, gave the ballet a nationalistic flavor.

In Act 1, Matthew Davo as Tasmi and Julafer Fegarido as Achmed were visibly nervous in their solos. Initially, their turns and jumps were off, but they gained momentum as the ballet progressed. Davo and Fegarido exerted great effort to engage every muscle to defy gravity and throw in an extra pirouette or scissored jumps.

As Mir-I-Nisa, Regina Magbitang moved effortlessly in her airy flights and renversé (moving the leg in a circle with an arched body). As an actress, she made every musical phrase stretch and yearn. The Sultan’s Wives who also doubled as the Pearls—Irene Kim Abrogena, Clarise Miranda and Ana Mikaela Samson—impressed the audience with their picture-perfect lines that radiated lush and refinement.

Audiences applauded the colorful spectacle and the flashy dancing in Act 2. We felt the transition and acting could stand some improvement. Without the aid of program notes, you wouldn’t understand how Tasmi became the groom instead of Achmed. The Sultan’s mime wasn’t clear and to balletomanes, it looked clichéd.

PBT presents only three productions every season with a limited run. The dancers could develop their artistry if given more opportunities. —CONTRIBUTED