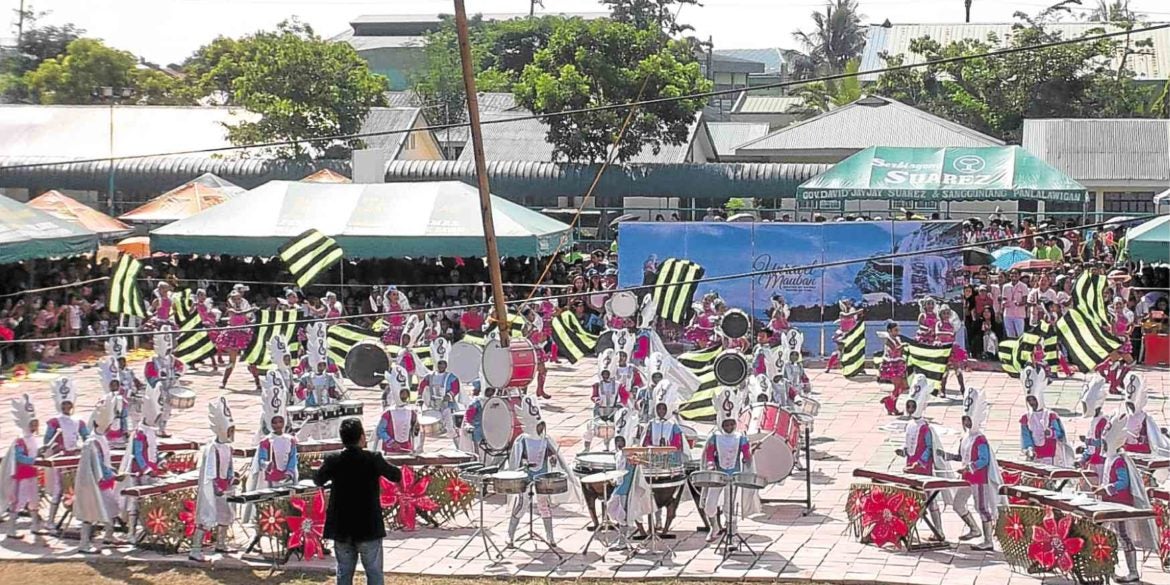 “Showdown” among the dancing contingents —PHOTOS BY AMADÍS MA. GUERRERO

The coastal town of Mauban in Quezon province, bracketed by mountains, takes pride in the fact that it is the birthplace of the distinguished Jesuit scholar and historian Horacio de la Costa (1916-1977).

A National Historical Institute plaque at the entrance of the Municipal Hall and a Knights of Columbus monument pay tribute to Fr. De la Costa, who was the first Filipino college dean of the Ateneo de Manila, the first Filipino provincial superior of the Society of Jesus in the Philippines, and the first Asian assistant to the father general of the Jesuits in Rome.

My aunt Carmen Guerrero Nakpil once described Fr. De la Costa as “the gentle genius” of the Jesuits. He paid her back in kind, at least in my speculation, by writing the foreword to her first historical book of essays, “The Philippines and the Filipinos.” It began thus: “Here is a book to shatter the peace of mind of academic historians. Mrs. Nakpil is a leprechaun let loose in the archives.”

Mauban is a historically conscious town, with a Pamana walking tour, Spanish-era cannons, a 1725 public bath and seawall declared “important cultural properties” and a Rizal Hill Park, which had been used by the Spaniards, then by the American and Japanese invaders.

Mauban led by Mayor Marita Llamas recently celebrated its Maugbanog Festival. The “og” is from a local word, “bangog,” which means “high spirits.” The theme of the festival, as translated, is “thanks to the Lord for a bountiful harvest, for the honor and triumph of every son/daughter of Mauban.”

The varied activities were climaxed by street dancing and then a cultural showdown among the students from the national schools, who showcased the famous Filipino skill in music and dancing, backed by clever, moveable historical panels. The winning teams, screaming with delight, received huge prizes in checks.

The festival also promoted the town’s products, known as nilala, handwoven quality fashion accessories like tote bags, bonnets, slippers and boat tart. And then there’s Nipa Nog, a variation of the strong, heady wine Quezon is known for, lambanog.